“As the years go by, time will change and even reverse many of your present opinions.” 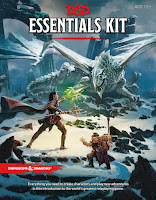 I was surfing online this weekend looking for interesting dice sets, just for fun. While a majority of polyhedral roleplaying game dice I noticed contained one each of the “standard” dice (including the D% ten sider), I was surprised to see a number of them – primarily in my search for “Koplow dice” – included four six-sided dice (4D6). I’ve seen a few sets in stores that also pack 4D6. I checked the “starter” boxes I have for Dungeons & Dragons fifth edition and realized the dice set provided with the Essentials Kit also included 4D6 (the Essentials Kit offers character creation rules, while the Starter Set does not). This seems to indicate a shift over the game’s almost 50-year history from several methods of rolling character ability scores to the one most geared toward what some might call a heroic play style; one where player-characters aren’t simply grunts sent through a meat-grinder adventure to meet horrible ends, with only the most “worthy” surviving, but where they begin as heroes who all have value in the overall storyline.

Back when Advanced D&D first released, the method of rolling ability scores in character creation remained the domain of the dungeon master. The Players Handbook, when consulted on this subject, states, “The referee has several methods of how this random number generation should be accomplished suggested to him or her in the DUNGEON MASTERS GUIDE. The Dungeon Master will in form you as to which method you may use to determine your character’s abilities.” Such esoteric processes seemed beyond mere players. (As I’m reading Game Wizards this makes perfect sense as Gygax sought in AD&D to exert his influence over the game, and, in a way, imbuing dungeon masters with that authority.) The Dungeon Masters Guide offers four methods from which the almighty gamemaster might choose: rolling 4D6, discarding the lowest die, and assigning values as desired; rolling as above 12 times and using the highest six scores for whatever abilities the player chooses; rolling 3D6 six times for each ability in order; and finally rolling 3D6 in order for 12 characters and using the most desirable set. (I’d love to check the system, if it exists in this form, in the Original D&D classic digest-sized books, but alas, I do not own a set....) Arguably “Method II,” rolling 4D6 12 times and using the best 6 scores, seems to have the best chance of providing a high set of ability scores, but “Method I” probably combines expediency and better chances of rolling high.

When I started playing in junior high school, back in what I call the “Golden Age of Roleplaying” in the early 1980s, we followed the Basic D&D rulebook character creation guidelines: rolling 3D6 six times, filling in character ability scores in order, then determining what class those scores seemed to best fit. This led to few characters to whom we felt attached, resulting in many adventures that we’d call “grinders” today. Using my brother’s Superior Star Rotary Printing Press and some specially cut paper I ran off a slew of bare-bones character sheets. Over they years of after-school and summertime play I generated a pile of seemingly disposable characters using this system; most returned after their all-too-soon deaths with a new name and some new equipment for use as gamemaster characters when I ran games. The sheets had a disposable quality well suited to the short-lived characters inscribed upon their surface

Over the years, as I’ve discussed recently, I’ve come to value more heroic, cinematic styles of play, even for “old school” Basic/Expert D&D. Now I prefer the Dungeon Masters Guide “Method I” of rolling 4D6, dropping the lowest die result, and assigning the score to an ability. I might argue that – despite Gygax explicitly noting that “quirks of the dice” could discourage players with characters of “short life expectancy” or one they don’t identify with – leaving the method of generating ability scores up to gamemasters gives them and not the game rules the freedom to determine how “heroic” character ability scores seem. Deferring to “rulings” and not “rules” in this case predisposed AD&D to the whims of the gamemaster, which some might deem the right way for their particular play style. It’s interesting to see fifth edition D&D leaning more toward heroic play as expressed by the rules. Rather than giving gamemasters a choice, it urges payers to use the classic “Method I” above, or, at their discretion, assign the values of 8, 10, 12, 13, 14, and 15 to abilities as they desire. The agency moves back to players using the method with the greatest chance of generating the most heroic stats. (This doesn’t even touch on the usefulness and relevance of ability scores between 3 and 18, a contentious debate that has inspired interesting variants in some Old School Renaissance games.)

Character creation has always felt to me a “game within a game,” something individuals could engage in on their own to prepare for a group session. Fifth edition D&D takes this to an entirely new level (no doubt a progression from previous editions), with expanded features for races and classes, and even adding backgrounds. I haven’t invested in the D&D fifth edition core books – readers know my preference for introductory starter versions of games – but my experience with third edition and what little I’ve seen of fifth in the starter sets shows a clear move toward more heroic play styles with greater influence from players themselves.

Odd that the 4D6 method has been around for almost 50 years yet dice manufacturers – and even the purveyors of D&D itself – have only recently thought it wise to include 4D6 in polyhedral dice sets. Probably a purely economic consideration, since players could re-roll the single D6 four times when determining ability scores; or, as players do, scrounge dice from other board games eclipsed by D&D’s allure. Including four D6 rather than three D6 certainly acknowledges the prominence of “Method I” (and similar variants) and its survival through D&D’s various iterations.