“Trust not too much to appearances.” 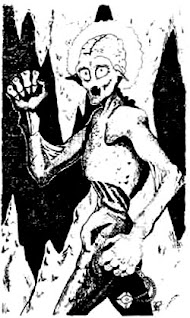 I’ve got a small, module-sized setting in mind to develop, one intended for that possible day when the pandemic subsides enough so my son can have friends over and I can tempt them away from Roblox to try some games, maybe a wargame, and hopefully my homebrew version of Basic/Expert Dungeons & Dragons. To that end I’m sketching out a region with a premise, a moorland created in an ancient battle to defeat a powerful sorcerer; meaning lots of magical-type creatures and ruins to explore. I’m even getting ideas for a town they can use as a base, in the manner of B2 The Keep on the Borderlands. With all these ideas swirling in my head – especially considering monsters created by magic, like gnolls, gelatanous cubes, and, of course, owl bears – I remembered the dreaded doppelganger from my earliest days of D&D. Re-reading its entry in both the Basic D&D rulebook and the Advanced D&D Monster Manual I was rather disappointed in the very shallow presentation...so I embarked to not only see what subsequent editions did with the monster, but started concocting ways I could adapt it to my own ends.

I don’t specifically recall using a doppelganger planning my high school D&D adventures, though I have a faint memory of a party encountering one as a wandering monster. In those days I often relied on random tables for encounters. One group spent a great deal of time exploring the Sea of Dread and having random encounters on the ocean and the various islands on which they landed. Many of our forays into Sanctuary with Chaosium’s Thieves’ World boxed set started with a basic premise and devolved into a frenzy of snowballing random encounters, few of which ended well. So it’s no surprise I have a vague memory of a party wandering a dungeon – possibly my ten-level Caves of the Unknown – randomly encounter a doppelganger. Given its nature and the basic description of its tactics, it probably assumed the identity of a party member, stirred up suspicion, and caused a fight. (Probably par for the course in my adventures those days.)

The doppelganger monster entry in both the Basic D&D rulebook and the Advanced D&D Monster Manual teases readers with an engaging concept the uninspiring description quickly turns into a combat encounter. It seems little more than a 4 Hit Dice mindless assassin whose sole purpose is to mimic those it sees and eliminate them. “Once in the form of the person it is imitating, it will always attack that person.” (Moldvay, page B33) After infiltrating the party in the guise of one now-dispatched member, “It will attack the others by surprise, often when the party is already engaged in combat.” The AD&D Monster Manual mostly focuses on its urge to imitate victims, do away with them, and proceed to attack the party. In these earliest days of D&D’s development the doppelganger serves primarily as a monster with an innovative infiltration attack. Granted, a creative gamemaster could add greater depth to that, but the description as given focuses on its short-term motivations of imitation and assassination. 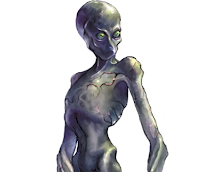 Alas, I no longer have my 2nd edition D&D core books, so I don’t know for certain how the game treated doppelgangers then; I can only assume it added a little more depth to its motivation along with the requisite update of stats. My 3rd edition D&D Monster Manual more fully developed the doppelganger with some motivation and more details on its infiltration techniques...along with the requisite expansion of stats and game mechanics. I’ve not followed subsequent editions of D&D, but I expect they further continued the trend of expanding the doppelganger’s character elements with the expected increase in game-related rulings.

Somewhere in my Hobby Games Recce draft file I keep a developing missive about the nature and role of monsters. It’s not quite ready for prime time, but my musings on the doppelganger remind me of it. While many monsters serve as unquestionable foes opposing the characters, some really deserve to stand on their own as non-player characters themselves. This not only gives them more depth (back story, motivation, personality) but provides gamemasters with some specific ways they might affect a campaign and some non-combat methods of interacting with characters. The entire “take the form of a person, kill them, and infiltrate the party to kill everyone” seems rather flat without a greater motivation and personality. 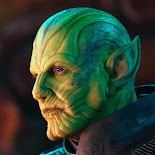 I was further inspired by another shape-shifter in mainstream media: the Skrulls in the Captain Marvel film (and also appearing briefly in a few other Marvel Cinematic Universe shows). While viewers at first believe these aliens are the villains, we quickly discover they’re more than cardboard cut-out shape-shifting monsters. They have personalities, feelings, families, and motivations. It also demonstrated different practical ways a shape-shifter could infiltrate another culture and pursue its objectives.

As I jot down notes and let ideas percolate in the back of my head for this diversionary B/X D&D setting module – general premise, location ideas, inhabitants and factions, resources for the base town – I start thinking about creating a doppelganger to infiltrate the mix. It certainly fits the bill as monster born of magic. I’m definitely choosing not to make this doppelganger a random monster encounter, but a personality with sway over various aspects of the setting. Having it operate on the edge of a region formerly ruled by a supreme sorcerer – with many ancient secrets lurking within – opens possibilities for its motives. As one of the setting’s quiet influences it certainly deserves an entire individual character development beyond the standard game stats, including, of course, the background and supposed motivations for the person or people it regularly imitates. As a by-the-rules doppelganger dispatches those it imitates it leaves behind a trail of corpses, evidence that should easily arouse suspicion; but a discerning, methodical shape-shifter could perhaps eliminate a primary personage while making sure others it impersonates are conveniently engaged elsewhere at opportune moments. What better way to infiltrate factions than a cleverly patient doppelganger with an agenda?

“Through pride we are ever deceiving ourselves. But deep down below the surface of the average conscience a still, small voice says to us, something is out of tune.”