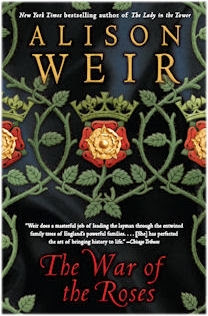 At this time of year I frequently look back with a nostalgic eye on the memories of my youth, particularly celebrating the winter holidays. As I’ve mentioned before (in seemingly ancient missives like “The Season for Fantasy”), the yuletide season seems ideal for indulging in fantasy media and games. Since I’m reading Alison Weir’s history of the War of the Roses at the moment, I am, strangely enough, thinking back on the first Christmas after I discovered Dungeons & Dragons: 1982. Having received the Moldvay Dungeons & Dragons Basic set as an Easter gift earlier that year, then purchased the D&D Expert set a few months later, I’d immersed myself in the game, spending most of my after-school time and the entire summer reading rulebooks and modules, creating characters, drafting maps, creating adventures, and running games for the neighborhood kids (from whom I’d first heard of D&D). That year began a tradition of receiving at least one gift to feed my adventure gaming hobby habit for Christmases and birthdays. That first D&D Christmas I got some D&D gifts, of course, but I also received Avalon Hill’s Kingmaker, a game that broadened my horizons and sparked an interest in history. 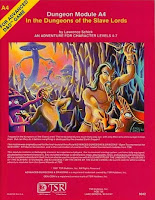 For Christamas that year my brother gave me two D&D items from our local Branchville Hobby (which I revisit in “Remembering Branchville Hobby”). I could forgive him for not knowing quite what I’d want. He was part of our after-school gaming activities, but he never really immersed himself in the adventure gaming hobby as I have. He knew I enjoyed the Scourge of the Slavers series of modules – I recall having run bits of A1 Slave Pits of the Undercity and A2 Secret of the Slavers Stockade for our neighborhood friends – so he selected one of the two I didn’t have yet, A4 In the Dungeons of the Slave Lords (of course I later used some spare Christmas gift money to buy A3 Assault on the Aerie of the Slave Lords). I have fond memories immersing myself in A4, reading it cover-to-cover while listening to the LP recording of the E.T. the Extra-Terrestrial my parents gave me.

Branchville Hobby offered an adequate selection of fantasy miniatures, usually just a few Grenadier boxes and some Ral Partha and RAFM blister packs. My brother picked one he thought I’d like, the Grenadier AD&D Wizard’s Room box. I think it was my first set, as I recall, albeit not terribly useful in our gaming. That said, it was the first of a host of miniatures I bought and painted during my high school gaming years (with TSR’s Official AD&D Basic Paint Set I received as a gift for the following Christmas...).

I don’t recall getting anything for D&D from my parents that year. As a parent myself, often overwhelmed by my son’s constant chatter about Roblox, I can understand if they didn’t quite comprehend what it was that I did with that strange fantasy game. They never discouraged me, though, and have supported my odd gaming efforts as a hobby and profession during all the years since. 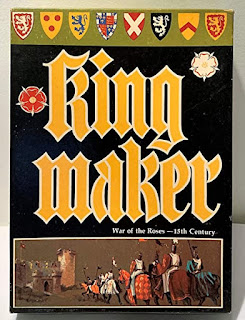 Which leads me to Kingmaker. As kids our parents often selected gifts for us in our relatives’ names, especially our grandmother and great aunt and uncle, whom we visited in the Bronx (an hour’s drive from our home in suburban Connecticut) at least once a month. This ensured our relatives had something to give us for Christmas (and also birthdays) and that we received something we’d wanted...all without having to explain too much about the weird stuff we were into, like D&D. So for Christmas 1982, when we gathered in my great aunt and uncle’s apartment to exchange gifts (usually closer to the New Year’s holiday), I tore open the wrapping paper to discover a thick box labeled “Kingmaker.” It was my first Avalon Hill game. I didn’t know much about the history, but I read the rulebook and put together in my mind as many rules as I could comprehend. Over the next few years I occasionally played it with the neighborhood kids after school. Alas, my limited understanding of the subtleties of rules and history meant we focused more on the wargame aspects than the political intrigue that characterized the War of the Roses. Yes, we were “playing it wrong,” but we had many afternoons of fun assembling armies, marching through the English countryside, and vanquishing opposing players in epic battles.

Kingmaker and my immersion in D&D sparked an interest in history, particularly the medieval era, that soon branched out to any period that appealed to my sense of imagination. It inspired me to pursue a minor in medieval studies in college to compliment my creative writing major, a journey that further broadened my horizons at the time into Arthurian legends, French fabliaux, Boccaccio, and Chaucer, and even Islamic art and architecture. It began my journey to explore more game companies beyond TSR and more game forms beyond roleplaying games. In all my intellectual wanderings over these many years, however, I’ve never really returned to the War of the Roses. I last revisited Kingmaker about 20 years ago, when I was still a bachelor and had the luxury of leaving leaving a huge wargame sprawled across the kitchen table of my small apartment. I understood the rules and history far better than in my misspent youth and enjoyed a solitaire play experience. But I never read or understood much about the War of the Roses. Weir’s War of the Roses is filling this gap in my knowledge with accessible prose (even if I wish the genealogical tables were a bit larger for my aging eyes). It proves that books and games inspire interest in each other and help expand our perspective.

Goodness knows Kingmaker wasn’t the last of my Avalon Hill acquisitions. Over the years I added other titles to my collection: Diplomacy, Samurai, B-17, Queen of the Skies, Wizard’s Quest, Mystic Wood, Waterloo, Gettysburg, 1776, Panzer Leader, Tobruk. Some – notably B-17 – saw a lot of play back when I had time to immerse myself in such diversions. Kingmaker introduced me to the form of board wargames (or “hex-and-chit” wargames) with which I’ve occasionally dabbled over the years in both play and design. The solo play in B-17 inspired my own Operation Drumbeat solitaire u-boat game.

Looking back Christmas 1982 was one of those remarkable points in my past that helped set me on the course I took later in life. The winter holidays – and especially New Year’s Day – inspire us to look back fondly at these bright spots in our past...and remind us to look ahead to the future, putting what we’ve experienced and learned to improving our lives and the live of those around us.

Whatever holiday you celebrate this season, I wish you peace, joy, good health, and hope at this darkest time of the year. May your New Year overflow with all the best things to sustain your body, mind, and spirit in these troubled times. And, of course, may you revel in plenty of gaming goodness. 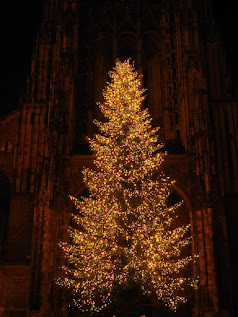