“I believe that we are here for each other, not against each other. Everything comes from an understanding that you are a gift in my life – whoever you are, whatever our differences.”

Russia invaded Ukraine last week amid a global pandemic, persistent supply chain issues, economic uncertainty, and continued politically fueled anger in America. Not exactly a time to sit around playing games. But just before the Russian invasion I learned of an interesting international training project, the prototype, computer-based Gaming for Peace (GAP) that intends to teach military peacekeepers “soft skills” focusing on building trust, teamwork, cultural awareness, and helpful communication. According to the website, GAP is “new training curricula for enhancing the preparedness and skills of personnel for conflict prevention and peace keeping missions.” I gave it a try. It seemed to me an exercise not only in building soft skills but in broadening one’s experience in empathizing with others, both those on your team and those you’re helping. Working with others for peace, compassion, and greater understanding seems like something the world needs a bit more of right now.

I’m not military personnel and I’m certainly not an international peacekeeper. With no formal training or associations I don’t even consider myself qualified to participate in what folks in the defense industry call the “serious” or “professional” wargaming scene (though I spend enough time causally exploring it on my own). Yet I decided to try the free trial of GAP its parent organization offered (free for anyone to try until May 2022) in the interest of broadening my gaming experiences...and my overall experience as a member of humanity. I’ve not finished it, being ony a few “chapters” into it, but what I’ve seen so far has helped me learn a great deal about a peacekeeper’s mission, what privileged lives many Americans lead, and how “soft skills” remain oft-overlooked yet essential tools in our everyday interactions with fellow humans.

The GAP conference website offers a summary of the project (and hence game) goals:

GAP is an EU H2020 funded project which is developing a curriculum of soft skills derived from interviews with experienced military, police and civilian peacekeeping personnel, and the state of the art in peacekeeping relevant soft skills and serious games. GAP is embedding a selection of peacekeeping relevant soft skills in a digital role-playing game with in-game assessment. The key soft skills are: gender awareness, cultural competency, communication, cooperation, decision-making and stress management. In-game assessment is reported in individual ‘skills passports’ for players, and the learning metrics have been standardized against international benchmarks. The GAP module (curriculum and game) provides an inexpensive, accessible to all, standardized training in soft skills for peacekeeping and is at the cutting edge of State of the Art in the domains of training for peacekeeping, curriculum development, soft skills, assessment, game design and soft skills standardization.

The experience consists of three elements: the roleplaying game played on a computer or other device, a break between chapters for discussion (presumably when using GAP in a seminar environment), and an online, “in-game assessment” of actions and conversation choices with positive reinforcement pointing out those that proved most effective in the mission. Most of the experience comes from the interactive roleplaying game portion. 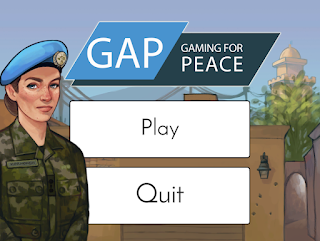 The player assumes the role of Maria, a Finnish peacekeeper assigned to a fictitious Middle-Eastern country; it recently emerged from a civil war (among other issues) and hosts a UN peacekeeping force tasked with helping the citizens rebuild despite numerous challenges. Maria’s mission focuses on civilian-military coordination: finding out how the military peacekeepers can assist the civilian population and informing the military of any local developments that might affect other missions. As Maria, the player must learn to interact with both her teammates and the local populace. The multi-national nature of peacekeeper personnel requires sensitivity. Discovering how to assist civilians requires listening, earning their trust, and respecting their culture. The mission isn’t to enforce peace, but to enable the civilians to establish it and help them learn to solve challenges themselves.

Textual journal entries provide mission background as well as some reflection on dialogues in each chapter. The game brings the player from one environment to another – quarters, mess hall, office, village market – each presenting situations with team members or civilians. Maria interacts with them through a series of conversations; these take the form of dialog boxes from Maria and other characters (with asterisked text indicating non-verbal cues, like gestures or facial expressions), with the player choosing responses from a multiple-choice menu. Sometimes the environments let the player choose with whom they interact, other times the scene runs through a core script of conversations.

At several points the player, as Maria, has the option to review mission-specific paperwork like a briefing outline, notes, overview of the country, and reports on the village she’s going to help, all quite official-looking. They help give players some idea how the military conveys key information, essential points the reader must deduce from it, and overall strategies for observation and interaction.

It reminds me a bit of the old Sierra computer game titles where players took on a persona, faced a mystery or challenge to solve, and visited different environments to interact with various characters through a multiple-choice text interface. It’s not particularly action-packed, but it’s supposed to simulate some of the interactions peacekeepers might have on duty. It’s a training simulation focusing on soft skills, so communication with an eye toward smooth teamwork and trust-building remains the focal point.

For me it served as a crash course in several areas: absorbing information about a national situation; understanding and acting according to the peacekeeper mission objectives and strategies; remaining mindful of cultural sensitivities and customs (for both fellow peacekeepers and local civilians); understanding and helping to find solutions to subjective problems that directly affect people’s lives and their communities. I knew some cultural concepts – having taken a few Islamic art and architecture courses from a visiting professor in college – so I at least knew the greeting conventions for a primarily Islamic culture. I found myself evaluating my options in conversations, often waffling between what might seem most appropriate and what might prove more effective for the mission. Playing a female character, I was somewhat taken aback that one male villager playfully hit on Maria, even suggesting his brother might like a date; it made me stop and consider how a female perspective in these situations would differ from the male (and a privileged male, at that). The introductory recce to the village market introduced numerous characters each with a host of motivations, concerns, and expectations of peacekeepers.

A multi-national consortium of institutions and scholars from across the European Union spent years developing GAP and no doubt will continue to support it when it leaves the beta stages in May 2022 and enters the professional simulation and seminar state. I’d like to hope the United States’ professional wargaming community offers a similarly sensitive and effective training tool in this field. GAP certainly offers those outside its intended audience a view into the international peacekeeper’s world. It might even seem ideal for American high school and college students for a number of reasons seeking to explore this career path or other jobs working with different cultures. The game experience has so far proved an eye-opening simulation of the role international peacekeepers play: what they do, practically, in day-to-day operations; their mission goals; how they achieve these objectives in the peacekeeping environment; the mindfulness they must possess to successfully interact with mission personnel and civilians. It offers a safe environment in which to develop and practice soft skills of communication, trust-building, and teamwork. It provides a taste of unfamiliar cultures to those who might not have had exposure to non-western, non-privileged societies.

GAP helped me further recognize how amazingly privileged white Americans are, both in our own country and the world. Russia’s invasion of Ukraine also reminds me about the incredible privilege many white, male Americans like me enjoy...and too often take for granted. Americans have not witnessed a war on their soil since the mid-1800s; certainly nothing affecting civilians like the ravages of two world wars and numerous other conflicts around the world since then that have devastated the lives of ordinary citizens. Some of us complain about the war’s effect on the price of our gas or groceries. Others use the invasion to score political points in our ever-more-vituperative discourse online and in the media. Most of us watching the news are shocked to see Russian forces unleashing such horrors of war on people like us with a culture very much like ours. Not since World War II have we seen one sovereign western nation invade another with such force. We sympathize so deeply with Ukrainians because they look like us, have many of the same values, come from a similar western culture, share the same hopes. Yet tools like GAP can help us realize we have things in common with all humans, no matter the color of their skin, their language, their culture...and respectfully appreciate our differences. GAP offers researched interactions with people who aren’t like us: from different cultures, various economic and political situations, with different immediate and long-term goals for themselves, their families, and their communities. It takes awareness, self-reflection, and a willingness to improve ourselves to understand each other and work together toward peaceful co-existence, one where we prioritize the welfare of those in need over more selfish goals. GAP demonstrates how games – even specialized professional games – can help ordinary people gain a greater degree of empathy for others and an understanding of how we might become more sensitive to each others’ needs.

I heard about GAP from the PAXsims blog, a website about using serious games to tackle primarily peaceful situations governments and other institutions face. It’s a good starting point in learning about how professional games can help expand our perspective on real-world situations and prepare us to meet these challenges in the future.

“What we have still not learned is how to treat our fellow human beings.... We have to find a way to coexist without doing harm to one another and that is whether it’s in the United Stated or in the Middle East or in the African continent or in Asia or anywhere on the planet.”