“Reality is merely an illusion, albeit a very persistent one.” 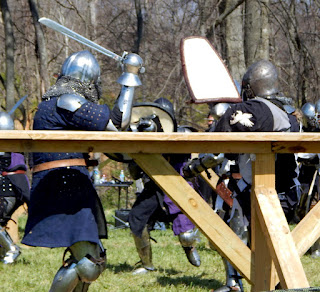 Back in April my son and I attended a “buhurt” medieval combat sport event, “Mead and Mayhem,” at a nearby winery. Several teams from the east cost battled in the lists in a regulated melee. Participants wore period-authentic armor and bashed at each other with blunted weapons certified to the league rules, with no thrusts, no hitting certain spots, until an opponent goes down (at least one hand on the ground). The first day teams of five armored opponents bashed at each other in the heavy wood-rail arena (the “list”) while an audience of about 150 cheered them on (fueled, of course, by wine, beer, and mead...). As a medieval enthusiast I enjoyed it; my son quickly let himself get caught up in the action, despite my droning historical commentary. Despite the rules each melee demonstrated the power and brutality of medieval combat...and showed how such fights often took less than two minutes to bring one team of five to victory. Of course in my head I started comparing it to combat in roleplaying games, particularly my favorite Basic/Expert Dungeons & Dragons. Although that’s a fantasy roleplaying game grounded in some aspects of the real world, in actuality trained, armored opponents clashing in battle goes pretty quickly. 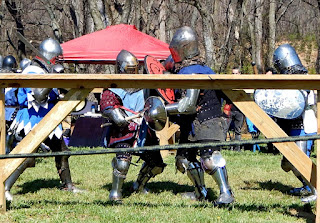 Historical Medieval Battle (HMB) is a full-contact sport. Participants train for the physically grueling combat, often at a gym with a list set-up and a league team providing a source of both practice opponents and mentors along with community knowledge about acquiring the arms and armor. They learn the combat rules. They wear armor and a helmet that can weigh in the 50-75 pound range. They learn how much that helmet can limit their field of vision and their overall situational awareness on the battlefield (extremely limited depending on the style of helmet visor). Watching these men and women fight in competition quickly demonstrates the physically exhausting and punishing nature of medieval combat. Teams size up opponents, then close for one-on-one fights, with some participants occasionally holding back to help when two adversaries become locked in a wrestling match (and sometimes their armor gets locked together and they both go down). Occasionally a fighter body checks an unsuspecting opponent. The long-shafted two-handed axes deliver devastating overhand blows. Within two minutes the five fighters of one team are down. 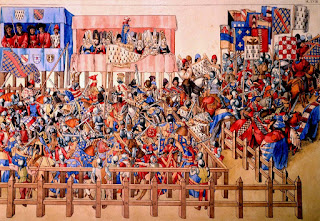 Such melees were historically as much a part of tournaments as the more romanticized jousts of the middle ages. Knight marshals, like their modern referee counterparts, enforced some rules (such as blunted weapons and no stabbing), but the melee often provided factions and personalities the chance to bash out grievances or pursue vendettas among a lord’s supposedly allied vassals. Watching the “Mead & Mayhem” fights I started to wonder how deadly medieval combat would become if participants used sharpened weapons and ignored any rules, simply fighting for their survival on the battlefield. No doubt the melee would end far sooner and with more gruesome, dire injuries than some ugly bruises, aching joints, and maybe a sprained hand. One or two good hits with a sharpened weapon and a fighter would go down in a bloody pool with an agonizing cry.

These kinds of events help us form ideas about medieval combat. We read about epic fights in our favorite fantasy novels and comic books. We see staged medieval combat in film and television (or whatever passes for film and television these days) and sometimes in person at renaissance fair events. These aren’t realistic sporting competitions but fights that engage our sense of drama and help tell a story. Everyone has their own vision of fantasy roleplaying game battles, both the cinematic feel we get participating in them and the acceptable level rules play in running them. Combat in games serves a similar purpose as it does in literature, films, and television: to provide a literal conflict, to increase the drama, to entertain us. 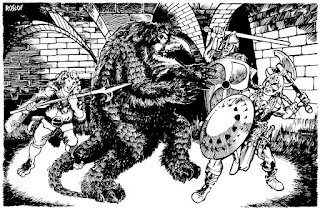 Fantasy roleplaying games serve to entertain with varying degrees of verisimilitude, a semblance of logical reality reflecting, in this case, both the “fantasy” and the “game.” Setting and mechanics help define a game’s reality: it’s grounding in a particular cultural tradition such as Western medievalism (or our individual sense of that); the prominence or limit of fantastic elements like monsters, magical items, and spells; and the extent to which combat is deadly toward heroes and their adversaries. “Realism” also influences game mechanics. Roleplaying game combat rules run the spectrum from crunch taking into account modifiers for numerous conditions to freeform narration influenced by character and setting. Many games emphasize exhaustive rules governing combat. Although we typically measure a “round” of combat as five seconds of game time, the actual playing out of the rules for that fight takes far longer than five seconds. Having their roots in board wargames, many of the earliest roleplaying games obsess over precise rules for various actions, particularly combat. (I discuss the emphasis Basic D&D – and by relation D&D in general – places on combat in another, as-yet-unreleased missive languishing in my Hobby Games Recce draft file....)

I certainly lean toward a more rules-streamlined cinematic style for roleplaying game combat. But after watching the “Mead & Mayhem” competition I can’t help but consider how deadly combat should feel in the game. D&D can often seem like it devolves into endless fights (depending on what the players want to get from the experience). I wonder if, after one or two quick and painful combat encounters characters might think twice before charging in with weapons drawn (and I’m not even considering the risks inherent in casting combat spells or sneaking around for that backstabbing attempt); perhaps they might seek other, non-violent solutions to encounters, ones focused more on advancing a deeper plot and developing their characters,

I could ramble on about my own preferences tinkering with combat in my favorite B/X D&D – dropping low-level opponents after one significant hit, beefing up character chances in combat to maintain the cinematic feeling, describing hits less as hit point loss and more in physical damage – but these all fall into the realm of individual preferences...and I realize my tastes don’t represent any generalized trends or majority perspective. That said, having witnessed the fighting at “Mead & Mayhem” and realizing this is perhaps as close to lifelike medieval combat I’ll see, I have a new appreciation for the danger of melee combat...one I’d like to instill into my future games as a means to foster non-combat alternatives and encourage story development over rules adherence.

Everyone has their preferred game style, varying degrees of reality they tolerate, different levels and kinds of rules complexity, all variable by genre and other factors. I believe having fun creating a good collaborative story far outweighs adherence to detailed, often cumbersome rules or a strict reading of “reality” in the game...unless, of course, we find our pleasure in that.

“Life is not a problem to be solved, but a reality to be experienced.”