Turn Up the Positive Feedback

“I can live for two months on a good compliment.” 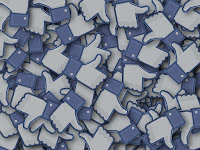 Everyone loves positive feedback. It validates us, says someone out there appreciates us, even if only in some very small way almost-anonymous way in the seemingly infinite cacophony of the internet. The Internet Age has conditioned us to crave it and has made a business of our need for positive reinforcement. Likes. Shares. Comments. Views. Texting. Instant Messaging. Reviews. Emojis. Humans have an urge to share things they like among their friends, a hobby community, even complete strangers. We find positive comments about these things not only uplift us but help connect us to like-minded people, give us a feeling we belong to a community. Positive feedback encourages us to interact and share more. Creative people often find positive feedback helps fuel their work, or at least their enthusiasm for it. Unfortunately in this Internet Age the negative feedback we get can easily overwhelm the positive...and can send us into unproductive downward spirals. It seems more people would rather kick down our sandcastle than help build it. It’s easier to destroy; creation requires a lot of time and effort, plus a good deal of the creator’s spirit (a natural vulnerability). Some folks find some twisted satisfaction in online destruction...trolls who, for whatever reason, seek to speak poorly of others, degrade their accomplishments, twist their words, pick a fight, and otherwise remind us of humanity’s darker side. We need to be more positive, build up those who need uplifting, praise the good things that have affected our lives, and offer thanks to those who improve our lives, even in small ways.

The feedback loop wasn’t always so instantaneous and we weren’t always so impatient and needy for positive feedback. Back before e-mail and the internet we relied on more personal interactions: phone calls, letters, and in-person compliments. I look back on a career of writing and game design (and other not-so-relevant jobs necessary to get by) and recall occasional bright spots that reminded me I was making a small difference in people’s lives. I still keep some old cards from people who appreciated my work as a reporter and editor at my weekly hometown newspaper (my first job). I keep a ragged file folder labeled “Journal Praise” from my work on the Star Wars Roleplaying Game and Journal during my all-too-brief time at West End Games: mostly copies of reviews, some sci-fi bestsellers lists, a certificate for an Origins Award nomination that generated some controversy (a story for another time, perhaps). And then there are the notes from fans, some hand-written, other typed, some printed on computers. “I am glad that there is now a way to get periodic information on the world of Star Wars for both a gaming aspect and a fan aspect.” “Keep up the good work and thank you for re-awakening my love of Star Wars.” “You have opened our eyes even wider to the awe inspiring universe that we ‘live’ in.”

Even as a relic from the last century I even save positive feedback from e-mails and online reviews. I have a print-out of reviews from Star Wars: Tales from the Empire. I keep an old e-mail from a Star Wars fan who had the privilege of interning with Lucasfilm, reviewing continuity and content when I was writing articles for Wizards of the Coast’s Star Wars Gamer magazine: “I was editing a bunch of stuff, and I’d been drowning in punctuation errors, atrocious spelling, invented ‘facts,’ and made-up grammar – in addition to really boring stuff – when I got to your article. It was so good I almost cried. It was actually well-written. And most shockingly of all, it got me interested. It made me care about what it was saying.” In another old e-mail a former colleague passed on some Journal praise I’d missed: “I flipped through Star Wars Adventure Journal #7...and this issue is freaking amazing. The best issue of the SWAJ by far, and one of the best Expanded Universe sources ever published.” These compliments helped sustain me during my “Desperate Freelance Years” and still make me smile all these years later.

Today the internet and e-mail make it easier than ever to send feedback; but more often people voice negative sentiments. We leave a bad review when a product disappoints us in the slightest (or, worse yet, simply want to torpedo a product with our and many others’ angry comments). We rate a product poorly because it wasn’t perfectly what we’d expected or wanted. We voice our criticism when others share things that bring them joy because we ourselves don’t care for them. We are quick to offer disparaging remarks – from a casual crack to an intentional insults or, even worse, a bitingly hateful insult – and horde our compliments like dragon’s gold. We’re not always like this. Some folks are more openly negative than others. But it’s easy to slip into critical mode instead of an uplifting one.

In 2012 game designer Monte Cook issued a challenge: “Throughout the month of August, I pledge to only say positive things on line. I’m calling this A+, as in, ‘A positive force,’ or just ‘August positive.’”* It’s something I – as a relative newcomer to blogging and social media – took to heart. I’m not always as positive as I should be and there are occasions where one must seem negative to call out inappropriate behaviors; but overall I’d like to think I’ve spent more time at Hobby Games Recce celebrating the adventure gaming hobby than cutting it down. I’d like to think remaining positive in online interactions is enough. It’s a good start. It’s a good habit to establish. But I often feel it’s not enough. We need to start initiating interactions along with reacting positively in comments and likes to material online. (And kudos to those already engaged in this.) Some call out bad behavior and confront it; let’s also make an effort to uplift people doing wonderful things for us.

I’m challenging myself – and I challenge you – to make a point, maybe once a week, of giving positive feedback to someone who’s made a genuinely positive impact in your life. That author whose book you enjoyed. The artist whose fun t-shirt design garnered compliments from strangers at the supermarket. The restaurant that made your vacation special. The blog poster who made you stop and think. The reviewer who recommended a good game. Electronic or analog; we still have access to stationery, greeting cards, stamps, and a functioning postal service.

It’s easy to sit back and let all the negativity swirl around us – not just in our own spheres, but in our troubled world – and claim it doesn’t matter to us, we can’t do anything to change it, it’s an unstoppable force. In our own way we can uplift someone else within our reach, someone who deserves a boost, however small, and let them know they’ve made a positive contribution to our own life. It’s not much. It’s not a cure for the world’s ills. But it might make it infinitesimally more bearable.

“Other times, you’re doing some piece of work and suddenly you get feedback that tells you that you have touched something that is very alive in the cosmos.”

* (Admittedly “A+” is better than a former employer’s push for more positivity, called “B+,” as in “be positive,” but everyone who saw the “B+” signs around the office wondered why we as employees didn’t rate a higher grade....)