Rumors in the GM Toolkit

“Half a truth is often a great lie.”

One of the first elements of Basic Dungeons & Dragons that impressed me came in module B2 The Keep on the Borderlands. Here, in the supposed base for characters exploring the Caves of Chaos, one could talk to the keep denizens and get information to inspire or aid their adventures...and some of that information was accurate, and some was patently false. I’m developing a new, system-neutral fantasy roleplaying game setting (mostly because, after The Greydeep Marches, I’m a glutton for punishment) and, as I work out key personalities, factions, and locations, I’m tempted to offer a vast menu of rumors to goad characters into exploring different aspects of the region. And I don’t really feel obliged to note which rumors are true and which are false.

Rumors offer an engaging, in-setting method characters can use to gain information. On the surface they provide some context for those sharing them: why are they mentioning this to the characters, how do they know this, can we trust them (are they drunk, daft, diabolical), what biases and ulterior motives do they harbor? Rumors primarily impart details about locations, adversaries, obstacles, allies, nearly any aspect of a setting with which characters might interact. Their very nature helps shape the atmosphere, offering clues about how best to deal with challenges...assuming the rumors are accurate.

In my extremely brief discussion of rumors I look at three sources: the aforementioned Basic D&D module B2 The Keep on the Borderlands; the system- and setting-neutral heist adventure Kidnap the Archpriest by “Skerples” (coinsandscrolls.blogspot.com); and my own system-neutral Greydeep Marches setting. All three include rumors as minor set dressing to impart a better sense of the setting, though I’ll admit those in Archpriest play a more prominent role in the related kidnapping. 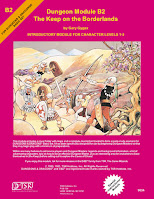 I’m sure gamers have their own preferences on resources “officially” noting which rumors are true or false. Keep on the Borderlands – an iconic D&D module by one of the game’s co-creators – seems to set the early standard by noting which extremely brief rumors are false. For instance, it lists “9. F A fair maiden is imprisoned within the caves.” This is, of course, a deliberate attempt to tempt characters into a trap, a tactic quite worthy of Gary Gygax’s sense of D&D (spoiler alert: the fair maiden, who’s shapely legs and body are all characters can see through the window in her cell door, is actually a medusa). The infamous “bree yark” means “we surrender” also falls into this blatantly deceptive category of rumor.

(One might argue the deceptive trick rumor like those in Keep on the Borderlands represents the contemporary view – especially of its author – of an adversarial relationship between gamemaster and players...but such issues are beyond the scope of this post, let alone my meager ability to evaluate past game design motives.)

But must we label rumors as true or false? Both Archpriest and Greydeep avoid such designations, leaving the veracity of rumors open to gamemaster interpretation. Archpriest notes, “The rumours on the following table here could all be potentially true. They could also all be false.” My rumors section in Greydeep states, “Like any good rumor, each one below contains some grains of truth, but most leave the actual circumstances up to the gamemaster to embellish.” Rather than the game designer rigidly determining which rumors are absolutely true and false, these give gamemasters the freedom to choose and enhance rumors to suit various needs in developing both setting and story. 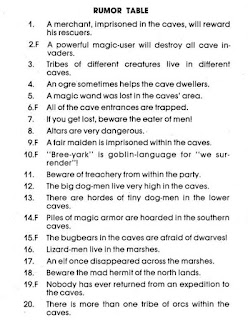 The rumors in Keep on the Borderlands come in brief, one-sentence tidbits. Gygax includes instructions on how gamemasters should dole them out: give each character one rumor to start; rumors from keyed locations and people are true (based on their reaction roll); “Do not give out all the rumors. You may add whatever false rumors you wish, but adding to the amount of true information is not recommended.” Fairly rigid and untrusting, typical of Gygax, who seemed always keen to remain the definitive arbiter of D&D rules, yet possibly excusable in an introductory product meant to imbue readers with certain game rulings. My other two references depart from Keep on the Borderlands in both the length of rumors – less vague, more meaty (particularly my own) – and in the instruction. Archpriest admonishes gamemasters not to roll too much on the rumors table, while Greydeep encourages use of rumors when characters interact with the setting denizens: “Roll 1d20 or choose from the table below whenever characters make the effort to befriend locals and get them talking.”

It doesn’t surprise me that Gygax discourages embellishing existing rumors or creating one’s own: “You may add whatever false rumors you wish, but adding to the amount of true information is not recommended.” Both Archpriest and Greydeep encourage gamemasters to expand rumors, sometimes based on their sources. “Add information—improvising, lying, or adding irrelevant detail as required—to make the conversation natural,” Archpriest recommends. “Each rumour is a seed of an idea or a potential plan.” “Such tales might also inspire gamemasters in preparing new adventures and players in choosing what mysteries to explore within the Marches,” my own rumor table instructions suggest. “Like any good rumor, each one below contains some grains of truth, but most leave the actual circumstances up to the gamemaster to embellish.”

I haven’t seen many rumor tables addressing sources. Keep on the Borderlands offers brief technical notes on sources related to doling out rumors. Greydeep assumes the source is a local denizen of the region friendly enough to chat with characters, leaving the gamemaster to determine and play with the source. Archpriest provides some specific notes on sources: a proper name (great for helping harried gamemasters at the table) and some one-word descriptions about their occupation and demeanor, such as “Edmund, monk, ignorant,” “Lolo, mother, distracted,” and “Fletcher, egg-seller, grumpy.” Gamemasters, being familiar with their game setting and tone, have the liberty to skew rumor sources, biases, and veracity to benefit the game. Maybe a source simply repeats a rumor for superficial gains, like getting attention, spending more time sizing up characters, or puffing up their own importance. Perhaps they have other motives, beneficial or sinister, possibly relating to the adventure at hand or simply their own standing and motives within the setting

The very nature of rumors and hearsay feeds the uncertainty with which players and their characters perceive them. If characters decided to explore them or encounter them in the first place, they’re prone to second-guessing any information they’ve heard based on their impressions of the source...and then second-guess themselves anyway. Perhaps they find a contrary rumor or evidence casting another one in doubt. Meanwhile gamemasters can determine which parts of a rumor work best in relation to other story issues: the nature and pace of the plot, character motivations and goals, and ultimately what might make for the best game according to player expectations and play styles.

Rumors serve as just one tool in a gamemaster’s repertoire, however tertiary they might seem when compared with the overall adventure details. Their use goes doesn’t always depend on firm true-false designations. They can help enhance the setting and tone. They encourage engagement with gamemaster characters and guide (or confuse) further action. All in the service of creating an entertaining play experience at the game table.

“I am bound to tell what I am told, but not in every case to believe it.”