I’ve wanted to run a Victorian science fiction miniatures game for a while now, ever since John from the 54mm or Fight! blog generously sent me a box of 15mm painted and based miniatures. In the wake of Queen Elizabeth II’s passing – and reflections on gaming and colonialism – I started developing a storyline in which I could fight battles between the various forces John sent, including French Foreign legionaries, African troops, some American Civil War zoaves, and a massive host of lizardmen. I pulled out my jungle terrain and Egyptian temple pieces, set them up on my three foot square green felt mat, carefully assembled and deployed my units, jotted stats on record sheets, prepped my dice and cards...only to realize the yuletide holidays were bearing down on me. Although I’ve done everything to set up the initial battle in a campaign, including developing an overarching storyline, playing will have to wait until after the holidays.

My basement wargaming table remains my exclusive domain for much of the year, but as the December holidays approach (with increasing speed, it seems, every year), I yield the field for the yuletide invasion of piled gifts, wrapping paper, boxes, and ribbons. My son’s birthday also falls during this time, so we’re doubly beset by presents for two special occasions (and sorting them out properly). It’s a nice work space, but it’s not the reason I built the wargaming table in the first place.

But I have everything in place. John’s gift of miniatures gave me plenty of small units to deploy. I have some ancient Egyptian terrain pieces (temples, obelisks, Anubis statues) that work even though they’re intended for 25mm figures. For past jungle-themed games (like Valley of the Ape) I have a host of jungle scenery, mostly plastic aquarium foliage but a few stands of palm trees and underbrush I crafted.

And I’ve developed a background story: The Spheres of Amun-Re. In 1875 an expedition from Morocco follows a map and journal left by an 18th century explorer. The documents lead to a lost ancient Egyptian temple in the middle of the Sahara desert. It’s architect, Khaemwaset, the son of Ramses the Great, was rumored to be a wise high priest and powerful sorcerer. Clues in a papyrus lead the explorers to believe the temple serves as a means of traveling between planets, with the origin and destination determined by movable stone circles set in the floor. The Moroccan expedition finds itself transported across space, where they emerge from another ancient Egyptian temple into the jungles of Venus. The current reptilian denizens of that planet wait to ambush them, testing their ability in combat as well as the strengths of competitors who follow in their footsteps.

I initially planned on trying two different game systems, my own Skirmish Kids (still awaiting my attention for revisions) and GASLIGHT. I’m going with the latter since it handles several smaller units on each side, while my own rules are for around 10-15 figures on each side, with none acting in groups as units. After drafting roster sheets I started categorizing units, giving their leaders backgrounds and abilities, and otherwise providing some story elements for moving forward. For the first scenario I fielded three factions, two of which are allies in their expedition to Venus:

ibn Masudi: A scholarly agent of Ahmed bin Musa, chamberlain to Sultan Hassan I of Morocco, this intrepid scientist-soldier leads a small detachment of bodyguards, the Barbary Lions, and the Stone Fist porters. He and his government hope to make great discoveries on Venus, ones that might help downtrodden peoples throughout north and central Africa who share his faith and his desire for freedom. To this end he has hired some American mercenaries....

Captain Buckman and the Flying Dutchmen: An adventuresome veteran of America’s tumultuous Civil War, Captain Buckman hires out his New York zoaves (veterans of a similar daring nature) to paying clients across the globe. In this case, the Moroccan sultan has retained this crack unit to serve under ibn Masudi on his expedition to the lost Saharan temple...and beyond.

Kashta and his Saurians: The inhabitants of Venus consist of the indigenous reptilian folk and ancient Egyptian travelers who settled here and, with their hosts, crafted a more advanced civilization among the jungles. Kashta and three units of saurian warriors with swords and spears guard the temple to challenge anyone from earth brave (or foolish) enough to pass through the interplanetary portal. (John sent a ton of lizardmen minis, though a 25mm Sebeki warrior from Crocodile Games serves as the towering commander.) 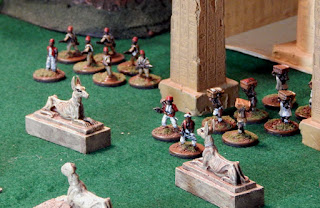 I have other factions waiting in the wings to take advantage of the Saharan temple and other means to send military expeditions to Venus: Colonel Taureau and a French Foreign Legion regiment sent into desert to find the temple and follow Moroccan forces; General von Angeber commanding veterans of the recent Franco-Prussian war; and a hodge-podge mission of British industrialists, scientists, and adventurers seeking to take advantage of new possibilities on Venus.

Before sending everyone back to their storage container and wiping the field clear of terrain I managed to take a number of photos, both wide shots so I remember the overall set-up and deployment as well as some close-ups of the figures in the environment. Hopefully after the holidays I’ll clear the wargaming table of wrapping supplies and presents to pursue my Victorian sci-fi battles in the Venusian jungles.