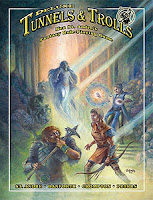 I’ve been busy lately more with wargames than roleplaying games – both core elements of the adventure gaming hobby (along with board games) – but I recently took a break from various wargaming projects and dove back into an old yet renewed game I’d enjoyed in my youth: Tunnels & Trolls. At first I didn’t get very far, just reviewed the rules and rolled up a character, but soon I was perusing different adventure books and couldn’t resist running a solitaire scenario. For a short while I basked in a comforting feeling from my earliest gaming days, sending my character wandering through programmed adventures, stumbling around traps, and either fighting my way to victory and fantastic treasures or failing that one saving roll and suffering a seemingly arbitrary and undeserving death. The experience proved a refreshing change from my current activities and one I intend to return to when I need a bit of contrast to my usual gaming scene.

I keep my old T&T books on my roleplaying game shelves next to my old Dungeons & Dragons books, part of the core games I enjoyed in my younger years and keep around to occasionally stoke the embers of nostalgia. Alas, I haven’t played it much in my adult years. A wargaming pal – John, author of the excellent 54mm or Fight! blog – sent me a generous box of game goodies that somehow nobody else wanted; it included the latest edition of T&T and a host of scenarios, many of which I’d never seen. It’s been sitting on the wargaming table while I’ve worked on other projects, so, as a break, I started perusing the rules, refreshing my memory, and admiring the amazing Liz Danforth artwork I’d seen in the past and many pieces I’d never seen before. My mind to start wondering about what kind of character I might create and what new solo adventures I might explore. Before long I was stumbling through new solo adventures, reliving some of those youthful experiences for a brief hour or two. It helped that character creation wasn’t too involved and that I could just pick up a solo adventure and dive in without having to muster a table full of fellow gamers. 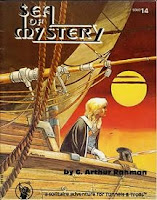 I gave a few new adventures a try, then fell back on an old standard: Buffalo Castle. As I recall from my misspent youth, some solo scenarios seemed less arbitrary than others. Each had its own tone, some serious, others peppered with clever jokes, and many quite challenging. Some of the earliest fare seemed like dungeons stocked with assorted fantasy elements seemingly tossed into the stew pot, with life or death often hinging on luck in combat or the infamous Luck saving throw. They released in the earliest days of roleplaying games, when some folks found satisfaction playing as adversarial gamemasters whose deadly dungeons sought to gruesomely eliminate characters. Titles like Deathtrap Equalizer Dungeon served as combat training grounds against assorted adversaries (some of whom posed additional, non-combat dilemmas) and a means to grant fantastic treasures to surviving heroes. Others, like Buffalo Castle, packed in dungeon odds and ends under a thin overarching premise. Many highlighted the very deadly nature of the T&T setting. Sea of Mystery remains one of my favorites, as it offered both a non-dungeon environment and more varied encounters.

I don’t recall the exact circumstances where I first discovered T&T; probably the local hobby shop which tried to cater to the nascent roleplaying game craze of the early 1980s. I got the fifth edition boxed set and rolled up a few characters to help understand the rules. Luckily I didn’t have to wait to gather friends to give it a try; the enclosed Buffalo Castle programmed solitaire adventure let me start my dungeon delving and gave me a good idea of both the mechanics and the playful, often arbitrary tone. In high school I didn’t always have players for the D&D adventures I’d spent hours mapping out and designing. The solo form did not offer as much satisfaction in character development or choice as sessions with a gamemaster, but it enabled me to find some roleplaying game fulfillment when nobody else was around. T&T satisfied my after-school need to immerse myself in fantasy roleplaying games when the neighborhood kids weren’t around to play D&D or other fare (King of the Tabletop and Kingmaker among our favorites). 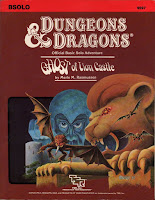 T&T introduced me to the concept of solitaire game adventures before publishers began releasing their own solo scenarios, even in the context of a rulebook as what I’d call “solitaire tutorial adventures.” At the time I was somewhat familiar with the numbered paragraph format, having borrowed some of my brother’s Choose Your Own Adventure books (though Flying Buffalo published T&T in 1975, a year before the first CYOA book). For a while I bought every new T&T scenario I found during sojourns to hobby and game stores. Although T&T remained my go-to solitaire roleplaying game for many years, it nurtured in me a lifelong love of the format. I was thrilled when TSR released two similar solo adventures for B/X D&D, BSOLO Ghost of Lion Castle and XSOLO Lathan’s Gold. I explored other solo gaming fare. I stumbled through Steve Jackson’s Sorcery! series of gamebooks and a few Fighting Fantasy titles. Over the more than 40 years I’ve been immersing myself in the adventure gaming hobby I’ve explored new game developments for solitaire play: gamebooks, odd scenarios for various games, solitaire board and wargames, even entire games like Ironsworn crafted specifically for solo play.

Solitaire gaming still plays a role in my life, perhaps even standing as one of several foundational pillars of my lifelong adventure gaming experience. Solo board and wargames, as well as forays into solo roleplaying, helped sustain me and some of my sanity during the covid pandemic. My recent reconnecting with T&T reminded me of my start in solo gaming, how it satisfied a need in my early gaming years, and how it can still serve as an entertaining break from and contrast with other games.