“Great things are done by a series of small things brought together.” 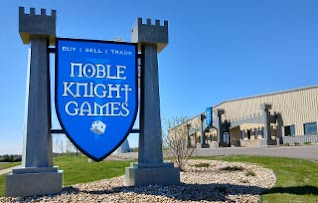 I don’t pretend to report on “news” here at Hobby Games Recce and I’ve long ago stopped trying to get excited about every “new hotness” popping up in the adventure gaming hobby. But recent word about one of my favorite online game stores prompted me to draft a short piece about Noble Knight Games (NKG). Ordering from NKG helped distract me from America’s initial hellscape response to the pandemic and offered a diversion from covid precautions and privations. Games from NKG let me sample offerings from new companies, explore different game mechanics, and expand the scope of my hobby activities. And now the company has recognized its workers organizing a union for a better relationship and, ultimately, a better business I want to support.

I’m not sure when I first noticed NKG on my gaming radar. I’m pretty sure my longtime friend Wayne mentioned the company (he lives nearby and even gets to shop there in person). I’d seen and even ordered from places like Wayne’s Books (no relation) to fill out some of my roleplaying game collection or satisfy a whim for an out-of-print supplement. But overall I didn’t really order many games online; I had a handful of regional game stores I frequented and attended a few area conventions with dealers and flea markets. And then the covid-19 pandemic struck. When it became apparent the plague wouldn’t just blow over in a few months I settled in for the long haul and started ordering game goodies online since I couldn’t go to conventions or brick-and-mortar stores. I made some direct orders from publishers and manufacturers. But I have eclectic interests, seeking game material new and old as my enthusiasm wandered across the hobby landscape of roleplaying games, board games, and board and miniature wargames. Noble Knight Games hit the spot.

At first I ordered a solitaire wargame and some Roman numeral dice, the latter for a solo wargame exploration of ancient warfare in Germania with Bob Cordery’s Portable Wargame rules and Peter Dennis’ wonderful paper miniatures. I found some used games cheaper than brand-new ones from the manufacturers. I’ve bought a few brand new items I knew would quickly become hard to find. And I’ve indulged in some goodies spotted in the sales advertised in the NKG e-mail newsletter. I’ll admit to buying some things on Amazon more for availability than any other issue (particularly price, with hard-to-find games going for collectors prices). I purchased from merchants who have an online presence and are willing to ship product. Now that we’re emerging from the pandemic I try to get out and support brick-and-mortar stores and vendors when I see them in person at conventions.

Noble Knight Games certainly helps make it easy to shop online for gaming materials new and old. I set up an account on the website and immediately started surfing the site, adding things to my “Want List” page. I could browse by publisher or manufacturer, by game line, or by product type, and even search using various terms to see what I might find. I’ve come to rely on wishlists like those on Amazon, where I keep a public one for those seeking gifts for me and a private one to track things I might like. But NKG’s Want List function goes a few steps further. If I search for a game and find it listed “out of stock,” I can still add it to my list, just to remind myself I want it at some point. Since NGK deals in used games, its inventory constantly changes. So if an out of stock Want List item comes back into the warehouse, Our Friend the Computer gets an update and NKG sends me an e-mail stating “Wish Granted,” letting me know a desired item is back in stock in some form. Ordering and payment works like most other retail websites. Boxes usually arrive within five business days (note: I’m in the continental United States) packed with paper, not foam peanuts or other plastic packing materials; we re-use both the box and packing paper for our own shipping and storage needs. Overall I’m thankful I’ve had a positive customer-service experience with NKG the past few years.

I lament the ephemeral nature of so much of the adventure gaming hobby’s material culture. Games release, enjoy some popularity, make their way through convention play, sit on store shelves, and eventually become hard-to-find items on the secondary market commanding collector prices. I’ve lost count of the various games I’ve learned about well after their time that became nearly impossible for me to find and explore on my own. Secondary marketplaces like Noble Knight Games and Wayne’s Books connect players with games from across the modern hobby’s almost 70-year history. NKG has helped me make up for some missed opportunities and expand my collection and my overall gaming experience.

The pandemic also brought to the forefront of our societal consciousness the importance of workers, particularly medical staff and service workers on the front lines, those everyone expects to knuckle under and do the job no matter the difficulties imposed by outside conditions. We’ve seen workers leave some industries with those who take their place asking for greater wages and benefits. We’ve seen those who could telework during the pandemic seek to continue working from home. And we’ve seen workers banding together in unions to protect their interests and, ultimately, those of their employers and customers. Paizo Publishing workers were the first in the adventure gaming hobby to organize in October 2021, with the company voluntarily recognizing the United Paizo Workers under the Communication Workers of America. Noble Knight Games workers sought to form a union this October. Despite some uncertainties and what one might call expected resistance given our society’s entrenched corporate attitudes, Noble Knight Games recognized its employees’ union on December 1. 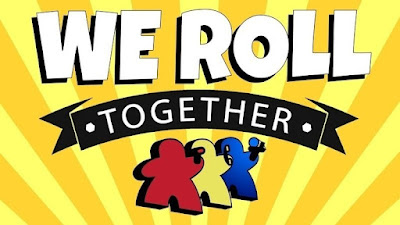 I’ve worked my share of crappy jobs over the years, often settling for poor wages and conditions because I desperately needed income. When I approached management in good faith about issues requiring attention I relied on good will; if dissatisfied I had no recourse but to quit. Unions give employees a voice through an official community. They can help amplify concerns and work with employers to find equitable solutions or reach bearable compromises. Many Americans view unions as an antagonistic element of business life. Communicating concerns, negotiating compromises, and addressing issues sometimes requires a level of confrontation, but it should occur in a mutually respectful relationship in which both sides are invested. The supportive hashtag #WeRollTogether the NKG workers promoted rings true. Unions ultimately give employees options and resources in striving for a better workplace so everyone can grow and thrive. I applaud Noble Knight Games United’s work and wish its members well as they take their first steps on a probably difficult yet overall positive journey in addressing workplace concerns. I commend Noble Knight Games for recognizing the union and encourage working with it in good faith and fostering mutual respect.

“What I try to tell young people is that if you come together with a mission, and its grounded with love and a sense of community, you can make the impossible possible.”