Gamers constantly debate the “accuracy” of their games -- particularly roleplaying games and wargames -- in simulating “real” conditions or processes. Discussions often range from those favoring lighter systems easier to engage newcomers to “crunchy” games heavy with detailed rules for “realistically” simulating various situations. Ultimately such precision falls prey to culturally mythologized concepts that -- though they contribute to entertaining gameplay -- often fail to portray the action with the desired degree of accuracy. In historical wargaming, designers often compromise between the “history” and the “game,” favoring the ease and enjoyment of the play experience rather than the sometimes murky and changing, often mythologized versions of history we uphold in our collective cultural consciousness.

During my visit to Historicon this summer I sat in on several seminars in the HMGS War College series, including “Civil War Rules and Scenarios.” The convention program description claimed:


“Members of the HMGS Legion of Honor, including Frank Chadwick and Glenn Kidd, will discuss elements of American Civil War rules design and how to create a great ACW scenario…. Discussion will include examples from ACW rule sets and a lok at some of the engagements in and around Fredericksburg.” 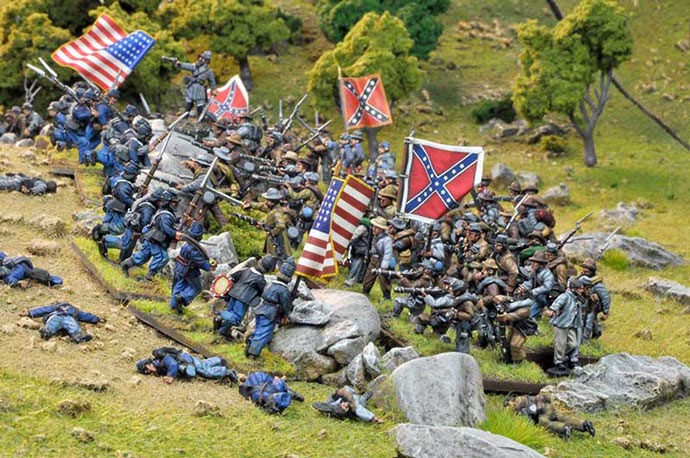 Led by Historical Miniatures Gaming Society (HMGS) luminaries Glenn Kidd, Duke Seifried, and Frank Chadwick, the seminar featured a number of other knowledgeable and vocal historical wargaming personalities in the audience who contributed to the discussion. Although I was hoping for some opinions of existing game systems and insights on “how to create a great ACW scenario” from the professionals, the discussion quickly diverted into a debate about what factors set the American Civil War apart from other period conflicts, with more regard for the historical theory, assumptions, and evidence than wargaming implications.

The panel speakers and audience participants explored a number of issues that might not otherwise occur to a casual wargamer with limited period interests:

Cavalry: While cavalry in Napoleonic times served to deliver the coup de grace by pursuing and destroying enemy infantry formations, in the Civil War cavalry served more as a scouting force with little military power to decide battles. (I would add the exceptions of the purely cavalry engagements at Brandy Station and Trevilian Station, but I’m a bit biased since they’re part of my local history.)

Why They Fought: Did views on American “aristocracy” -- with many immigrants fighting it on the side of the North, preserving a romanticized version as inspired by Sir Walter Scott’s literature on the side of the South -- contribute to both sides’ tenacity? Did a loyalty to officers from their own community and sometimes even elected by the rank and file play any role in soldiers’ devotion to duty on the field

Artillery: Cannon in the Civil War served more to offer infantry support using shotgun-like canister and grapeshot against advancing enemy units and to counter enemy artillery batteries on the field rather than its role in softening up distant infantry formations in a battle’s early stages during the Napoleonic era.

Rally the Troops: What role -- if any -- did the presence of varied terrain and a lack of destructive cavalry play in both sides’ ability to rally in the face of reversals and return to the fray?

Throughout the discussion audience members frequently challenged historical assumptions panelists made -- part of a friendly give-and-take in exploring the issues. The ultimate conclusion? Any wargame (and arguably any game) makes assumptions based on the popular mythology of the forces and conflict despite the “realities” according to the present version of history (and continued interpretation of historical evidence).

Humans have revised history with their prejudiced perspectives since the dawn of history. Ramses the Great’s “victory” over the Hittites at Kadesh in the 13th century BCE -- in the reality of modern historiography a near-disastrous ambush of pharaoh’s unprepared, scattered forces -- was retold on several prominent, surviving monuments in Egypt claiming the god Amun-Re himself aided Ramses in vanquishing the Hittites. Tennyson turned the disastrous charge of the Light Brigade in the Crimean War’s Battle of Balaclava into a glorious poem praising British valor and fueling the Empire’s enthusiasm for subsequent military exploits. Films about historical subjects often offer idealized or sanitized interpretations of historical events or eras created with an eye toward entertainment and not necessarily historical accuracy.

History as represented in wargames succumbs to similar compromises. No matter how much designers study aspects of a historical battle or era, they make certain assumptions on how the game universe works to craft a playable game based on the generally accepted history. Many of these assumptions evolve from mythologized concepts in  history or elements so adapted to a wargaming rationale that they lose some other historical aspect. When looking on the spectrum between actual “war” and “game,” wargames of any stripe -- from board and chit to visually stunning miniatures -- lean extremely close to game and very far from the realities of war they strive to simulate.

From my perspective as an advocate of games in education, this debate seems to devalue the role of wargames as historical learning experience. While I’m sure wargames offer students some feel for the events and issues beyond their rather static course reading and some classroom discussion, they serve a greater role: they provide an entertaining play experience that just might inspire them to learn more about the historical elements in the game, leading to further thought, research, and academic exploration of history as a personal interest.

Comments....
Want to offer feedback? Start a civilized discussion? Share a link to this blog entry on Google+ and tag me (+Peter Schweighofer) to comment.
at 8:45 AM