Usually about once a year my wife, toddler son, and I make the arduous pilgrimage “home” to New England to visit our families. Aside from the 8-10-hour drive -- complete with annoyingly frequent queries of “Are we there yet?” -- it’s a time for us to reconnect with our families and revel in memories of growing up in New England. We rarely visit for more than a week, given two entire days to drive there and back again, and our time is often already assigned to various family gatherings to maximize our visit with as many relatives as possible. But occasionally we find time to indulge our own interests, inevitably those of a geeky nature.

My personal quest was to find some additional miniatures for Fantasy Flight Games’ Star Wars: X-Wing Miniatures Game. I’d bought into the game after the initial wave of hype and, given FFG’s distribution rationale and collectors/gamers snatching up starships for resale and high mark-ups or to add to their own collections, choice vessels were hard to find (ironically Boba Fett’s Slave I was seemingly overstocked everywhere, followed closely by the Millennium Falcon). My toddler son, now absorbing everything Star Wars we allow (i.e., only original trilogy material), has latched onto the game, which we play with lots of parental assistance using the extremely basic yet functional quick-start rules.

I’d searched online and found two game stores near our destinations. We had a day to ourselves in Massachusetts before becoming immersed in family activities, so we drove down to Warren, RI, just southeast of Providence, to visit my wife’s friend’s soap shop, the Stella Marie Soap Company; not two blocks away stood The Game Den, a cozy store with retail display space and several gaming tables in a nicely renovated brick industrial building. Being midday on a Friday the store was quiet, but the staff was friendly; they also had the A-Wing miniature I was seeking, some additional specialty dice for the X-Wing Miniatures Game, and a discounted copy of King of Tokyo, a game I’d been hoping to acquire after seeing it featured on Wil Wheaton’s excellent Tabletop online video series over at YouTube’s Geek & Sundry channel (the game also caters to my wife’s love of Godzilla and other giant monster fare).

On our way back to my wife’s parents’ house we diverted through downtown Worcester, MA, via the vortex of traffic chaos known as Kelly Square, for her to swing by the Worcester Historical Museum to pick up a book she wanted and stop by That’s Entertainment on Park Avenue. The store is a wonderful warren of tables and shelves covered in comic books, vinyl records, games, action figures, and other goodies for fans of numerous stripes. Although dominated by comic books, the store had a solid representation of board games, with recent roleplaying game releases as well as several shelves of used books (including a small collection of West End’s Star Wars Roleplaying Game books). Although I didn’t see anything on display for the X-Wing Miniatures Game beyond the core set and several Falcons and Slave Is, I asked at the counter and they’d just gotten their shipment of new starfighters; so I snatched up two TIE Interceptors for my collection.

Although we didn’t have a chance to swing by Cave Comics in Newtwon, CT, on our way to my parents’ house, I’ll recommend it here as one of our usual stops (schedule permitting) to peruse their mainstream collection of board games and miniatures, usually combined with a stop at Burgerittoville next door for lunch, all housed in a classic railway depot building. 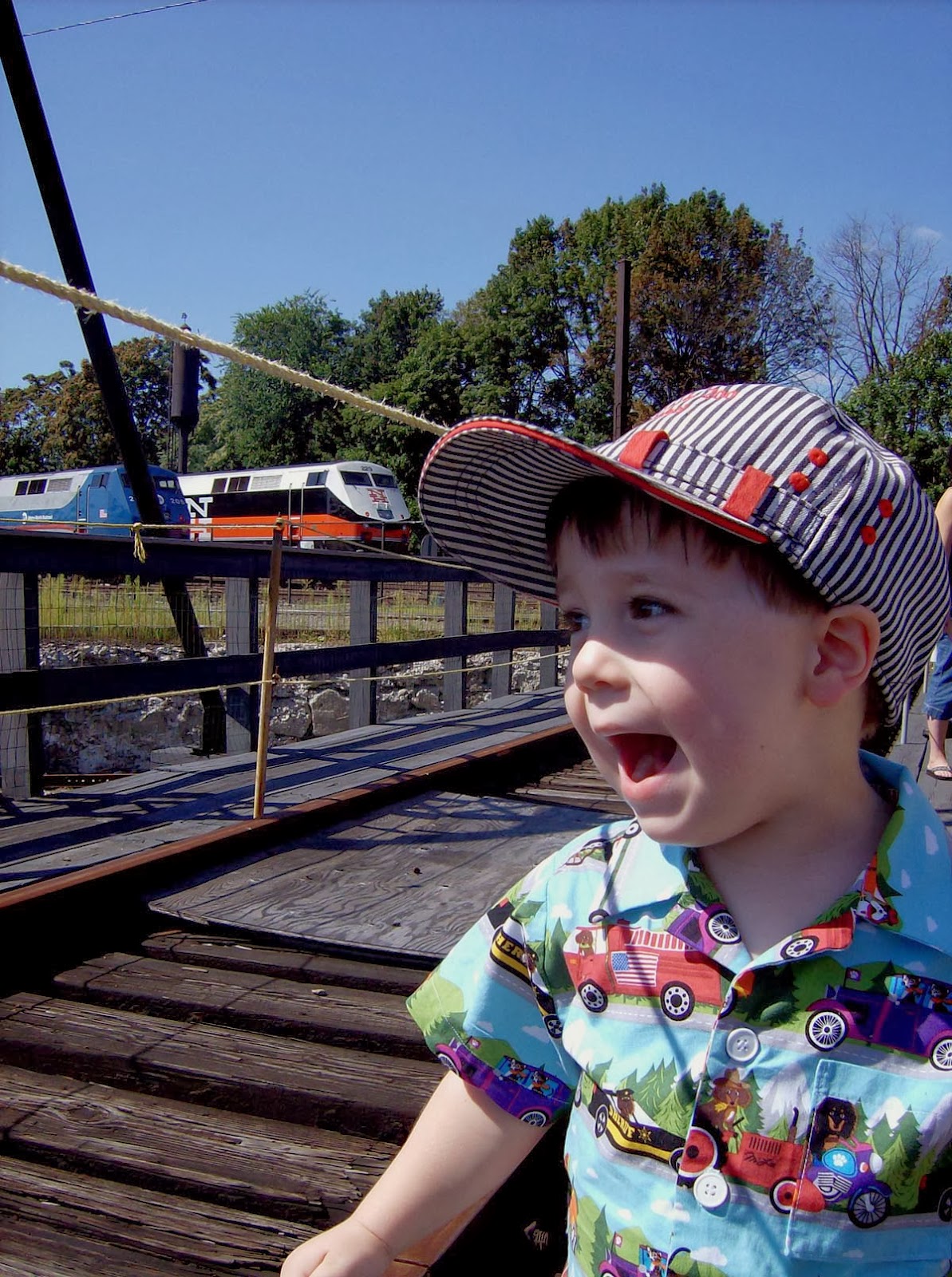 While we didn't indulge in game-related pursuits in Danbury, we found other geeky activities well-suited to our toddler’s interests. We spent a few hours at the Danbury Railway Museum housed in the city’s former train depot. The museum might seem small at first: the former waiting room contains several large model train layouts and exhibits featuring railway equipment and tools. For an additional fee visitors can ride in a vintage coach or caboose pulled through the train yard by a diesel engine, with a stop to get out and ride on the yard’s functional turntable track. For railway aficionados, however, the yard itself offers opportunities to explore rolling stock and engines both dilapidated and in various stages of restoration. Other railway museums exist in the northeast with far more comprehensive exhibits and more complete railway excursions (and far more expensive admission prices); while we have them on our “to do” list for family expeditions, the Danbury Railway Museum was just the right speed to keep our toddler entertained and engaged for a few hours.

We also partook of what has become an unofficial family tradition: riding the carousel at the Danbury Fair Mall. The classic carousel stands as one of the few reminders of the mall’s original heritage as the once-sprawling site of the great Danbury Fair. After last year’s attempt -- with our toddler literally kicking and screaming -- we finally succeeded, though the Little Guy chose to sit on one of the stable benches instead of even a stationary horse.

My parents live in Ridgefield, CT., where I grew up. We always enjoy walking downtown on the bustling Main Street, noting changes from my younger days, and spending time at the playground in Ballard Park. Inevitably we make a trip to The Toy Chest nearby, a tight warren of shelves packed with diversions for young and old, including a solid board game section and a fine selection of toy cars (our toddler got the candy-apple red BMW roadster). This year we finally had time for my favorite store, Books on the Common, housed in the building near Town Hall that for many years housed Bedient’s Hardware, where I had my first job in high school. Here I found two tomes catering to my interest in local history, Jack Sanders’ Ridgefield 1900-1950 (part of the Postcard History Series) and Charles Pankenier’s monograph Ridgefield Fights the Civil War. (I’d worked for Jack as a reporter and editor at The Ridgefield Press years ago in my first job out of college; he’s become one of several leading and prolific town historians.)

The One that Got Away

Our pilgrimage faced one major failure -- not just this year but for all 10 years my wife and I have been married, actually -- for we have never visited the fantastic collection of medieval arms and armor at the Higgins Armory in Worcester. We made it into the gift shop one visit while rushing between family gatherings, but never quite had the time to go inside and take the time to view the exhibits. Unfortunately the museum has fallen victim to the economic woes plaguing the nation and is closing at the end of 2013; luckily the collection is “integrating” to the Worcester Art Museum. Although the museum plans on exhibiting pieces from the Higgins Armory collection piecemeal in temporary exhibits, the entire collection won’t be reassembled again until the museum converts its current library space to a permanent exhibition gallery for the collection sometime in 2018. Something to put on the future “to do” list for our pilgrimage home. Maybe by that time we’ll have fully immersed our toddler into medieval history and other such fantasy fueled by arms and armor.
at 8:23 AM