I recently picked up a gently used copy of the Pathfinder Beginner Box at a game convention flea market. After examining its contents and reading the rulebooks I realized it’s an outstanding example of the introductory roleplaying game ideal. 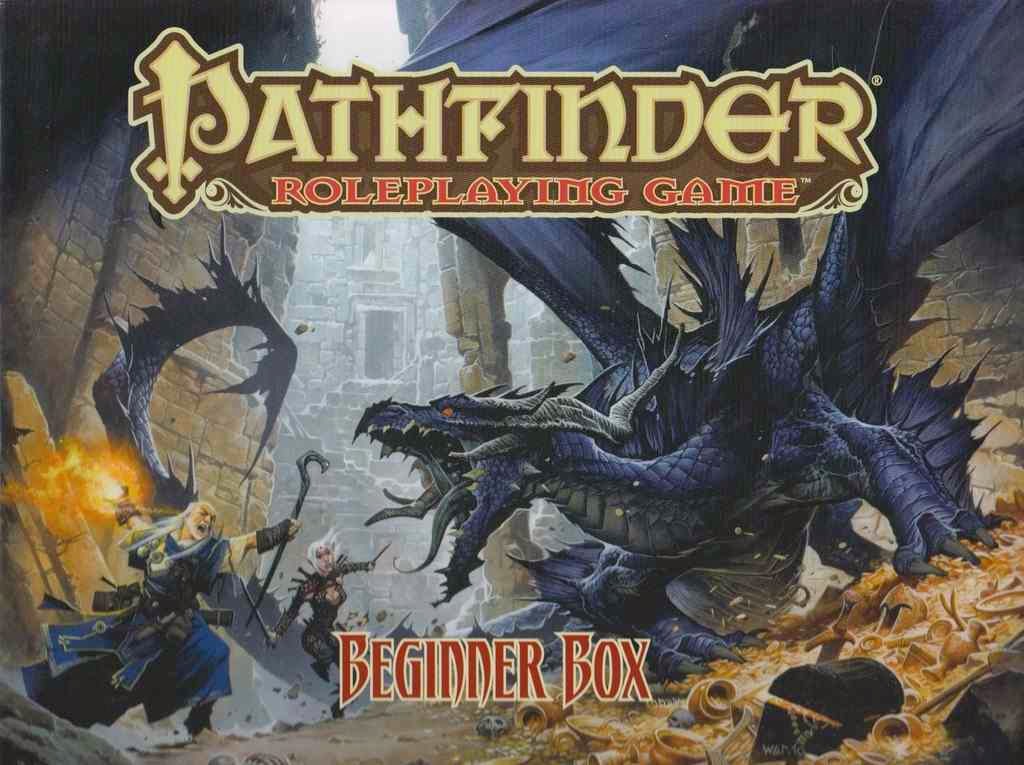 I’ve had the Pathfinder Beginner Box on my Amazon wish list for ages, more out of a curiosity with the Pathfinder Roleplaying Game as an Open Game License interpretation of everything players loved from third edition Dungeons & Dragons (and argued by some to rival D&Ds’ popularity and sales) and my longtime fascination with introductory game sets to tempt newcomers into the adventure gaming hobby. The $35 price tag kept it on my wish list as just that – something I’d like to have, but nothing immediately essential to my gaming or writing – but then I found a used copy for $15, a reasonable price I couldn’t pass up. To my delight I discovered the Pathfinder Beginner Box handily satisfied most of my criteria for an introductory roleplaying game...to the point where it even got me excited about playing.

An introductory roleplaying game has some very definite goals regarding its target audience and source material. It must distill the essentials of an established game system and present them to non-gamers in a basic format so newcomers can easily comprehend them...quite possibly exciting and inspiring them to continue playing and eventually graduate to the game’s full version. Designers engage in a balancing act between presenting a game’s core mechanics in an often simplified manner and yet retaining the allure and play style of the original material.

What do I consider elements essential to an introductory boxed roleplaying game ideal?

A Complete & Extended Play Experience: An introductory game should provide players with everything needed to play – player and gamemaster books, dice, character sheets (and pre-generated “sample” characters), maps, and scenarios – and not just run a single adventure with a handful of pre-generated characters, but explore original character creation and scenario-building for an experience that lasts more than a few game sessions. It must go the extra mile beyond a basic quick-start version of a game, which often consists of pre-generated characters and core rules enough to run a sample adventure; such quick-start products often omit character generation and advancement rules, gamemastering advice, and other niceties of full games. They’re more intended to market a new game to established gamers than to newcomers to the hobby. A good beginner game includes everything required to become fully immersed in play beyond a single session.

Step-By-Step Rules: A good beginner game does not consist of a reference book or tome of rules but an experience. Many game rule books assume a previous knowledge of or experience with roleplaying games and, as they’re often written by gamers, adopt certain style and organizational convention that aren’t always effective in teaching new players about adventure gaming. A good beginner game presents clear, concise rules in a logical learning sequence, each section building on the previous ones, at a pace and in a graphic style to make things clear for both learning the rules and referencing them later. This approach often incorporates a “programmed” solitaire tutorial adventure demonstrating core game concepts from the players’ perspective, and possibly a similar scenario to guide would-be gamemasters (frequent readers know I’m an advocate of solo adventures both as a teaching tool and for fun).

Inspiration: An introductory product must inspire players. Without a continually fueled excitement for a game players might not find the enthusiasm to read through all the carefully presented rules, “sell” it to their potential player-friends, and run at least one game. Additional inspiration can help drive energy toward more than one play session. Where does one find inspiration in an intro game? Evocative, color artwork of character types, monsters, locations, and equipment remain essential to help players visualize a game in which most action takes place in their imaginations. Maps offer ideas on areas to explore. Setting resources – accompanied by numerous illustrations – can offer a host of ideas to expand the play experience, like a sample adventuring base for characters, scenario design tips, and lists of monsters, treasures, equipment, and locations to enhance play.

High production values on all the components puts a sheen on a beginner product that says the company really cares about the game; they’re not enticing newcomers to the hobby with some cheap knock-off of a core game, they’re tempting new players with some of their best-looking work.

The Pathfinder Beginner Box meets all my criteria for a great introductory roleplaying game. The box includes everything for extended play, starting with a one-page flyer outlining what players need to read first if they’re on their own, seeking to play a hero, or hoping to run a game. Other components include a book each for players and gamemasters, four pre-generated hero folios (four pages each with character sheet and stat explanation), four double-sided blank character sheets, a full set of polyhedral dice, more than 80 cardstock “pawns” showing color images of heroes and monsters (with a handful of stands), and a poster-sized, “flip mat” with the sample dungeon on one side and a gridded sand-surface on the other to scale with the pawns and laminated for use with dry-erase markers. Everything’s full color with quality artwork and material.

The comprehensive components don’t fulfill the “complete and extended play experience” qualification by their simple existence. The execution and contents of both the Hero’s Handbook and Game Master’s Guide offer all the mechanics for creating and running characters through adventures up to fifth level. Aside from offering comprehensive information about races and classes, equipment, spells, skills, and feats, the Hero’s Handbook provides advancement rules and an overview of how to play the game. The Game Master’s Guide offers a host of resources beyond the nuts and bolts of game mechanics: explanations of different environments in which heroes can adventure, gamemaster tips both general and tied to game elements, 44 monsters with complete stats and encounter notes, a map and description of the region and a base town from which heroes can set out on quests, and some adventure hooks keyed to the regional map.

Both rulebooks take an approach that walks readers through various gameplay processes while immediately immersing them in the game. A 23-entry programmed solitaire tutorial adventure leads off the Hero’s Handbook, primarily demonstrating combat rules but touching on other game elements. Character creation walks players from one concept to the next, first race, then class (including spells and advancement), providing helpful suggestions at every turn; reference lists of skills and feats compliment those provided and explained with each class and the pre-generated characters. To help readers identify with the kind of characters they might like to play, the Hero’s Handbook uses questions and comments keyed not to game terms but familiar fantasy stereotypes everyone understands. For instance, the cover of the rogue pre-generated character states “Play this rogue character if you’d like to be good at:” and then lists a host of basic yet appealing qualities, like “sneaking,” “being a swashbuckler,” and “discovering secrets.” The Game Master’s Guide leads off with a full group dungeon crawl that gives each location a clear and well-organized one-page treatment; the format allows for a mini-map of the area noting monster and treasure positions, an illustration, monster stats, treasure information, and tips for handling the game mechanics for most situations characters might encounter there. Page organization walks through the basics in order, from what characters see to how they interact with challenges there. Both books employ an almost comic-book approach in visual style: short paragraphs, lots of in-column sidebars, graphic headers.

The Pathfinder Beginner Box certainly offers plenty of inspiration by getting readers excited about creating heroes, running adventures, and playing the game. Full-color illustrations demonstrate what heroes look like and what kind of adversaries they face. Everything gets an illustration no matter how small: weapons, armor, equipment, monsters, and magic items. (Sure, most of these pieces are probably drawn from other Pathfinder products, but “original” nonetheless to adventure gaming newcomers). Inspiration isn’t simply visual. The chapter on adventuring “environments” offers numerous menus and descriptions (in both narrative and game terms) for elements in dungeons, cities, and different wilderness terrain. The all-too-few pages on Sandpoint – the adventuring base town – and its environs, as well as a few plot-hook ideas, still excite readers with a concrete example of a starting-character setting reminiscent of the classic “Keep on the Borderlands” environment.

I’m no newcomer to fantasy roleplaying games. I even immersed myself in the third edition of Dungeons & Dragons when it released in 2000, played it a few times, and wrote some published material for it under the Open Game License. Even though Pathfinder’s game engine remains based in that Open Game License content, it’s presentation in the beginner box managed to rekindle some boyhood enthusiasm in this often jaded gaming veteran. While reading its contents I found myself seriously considering gathering some friends and giving it a try. Though it’s quite a bit beyond what my four year-old son, the infamous “Little Guy,” could comprehend right now, I’m definitely keeping the box around for some future time when he’s keen and interested enough to really enjoy the experience. That might not be far off...he’s already seen the box and cover illustrations in Daddy’s office, wondered what kind of game it is, and asked when he can try playing it.