Tékumel: The Lands of Joyful Addiction

I’ve been a fan of M.A.R. Barker’s Tékumel setting since discovering it in my early adulthood. I regret it’s been a rather solitary adoration; despite immersing myself in the world in its several incarnations, I’ve failed to interest any player group in trying it beyond a single game session. It comes to mind once again as renowned game artist and industry luminary Jeff Dee is currently running a Kickstarter campaign to bring the rich, exotic land of Tékumel back in its newest roleplaying game incarnation, Béthorm. 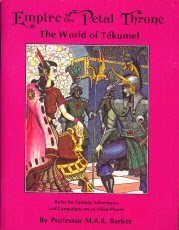 Tékumel was one of Dungeons & Dragons’ earliest campaign worlds, yet the first to fall by the official wayside in favor of more western-oriented medieval fantasy game environments. The setting combines two themes very alien to western audiences: exotic cultures and “magic” from a long-lost, advanced science age (one of the core elements of Monte Cook’s popular Numenera game). Rather than draw on the “traditional” western paradigm of medieval fantasy, Tékumel relied on more exotic foundations, inspiration from Indian, Middle Eastern, Egyptian, and Meso-American cultures. These historical elements combined with a science-fiction plot in which the formerly advanced interstellar resort colony was inexplicably warped into an isolated pocket dimension, plunging civilization into a primitive state which, over 50,000 years, produced an exotic, medieval-level society with pseudo-science magic.

Because it’s based in elements still very foreign to gamers, Tékumel remains one of the more fringe game settings, yet one with a rich and storied past and thus an extremely intricate depth. I’d consider its creator, M.A.R. Barker, among the Holy Trinity of the D&D game designers along with the revered Gary Gygax and Dave Arneson, all of whom having now passed into the great Valhalla of the adventure gaming hobby. Barker, a linguistics professor, incorporated in his creation the same cultural and linguistic depth as another founder of modern fantasy literature, J.R.R. Tolkien. The novelty and intricacy of Tékumel and the intensely creative personality of its author garnered a core of devoted fans who’ve helped keep interest in the setting alive more than 40 years and through several roleplaying game incarnations.

I’d heard about Tékumel and Empire of the Petal Throne in the general adventure gaming lore I consumed as a kid immersed in fantasy roleplaying, primarily Dungeons & Dragons. I’m not sure if I read anything in the pages of the venerable Dragon Magazine, learned about it from friends, or caught a glimpse of it at local hobby stores, but it remained in the back of my mind well into my college years. Shortly after graduating and starting my first job (as a reporter for my weekly hometown newspaper) I ran my first game events at a local convention (a linked series of D6 Star Wars scenarios); I found a soft-cover, saddle-stitched edition of Empire of the Petal Throne: The World of Tékumel published by Different Worlds in 1987, a reprint of material originally published in 1975 by TSR. I read it cover-to-cover and immersed myself in the amazingly alien setting, though other gaming endeavors commanded my attention. At some point – I can’t recall when or where – I acquired one volume of Gamescience’s two-volume Swords & Glory version of the rules.

At this point in my life I was working full-time but had a host of college-aged friends who got together over the summers for regular roleplaying game campaigns. At the time these included story arcs for D6 Star Wars and Cyberpunk 2020, with occasional side-trips into Space 1889 and Call of Cthulhu.

I recall experimenting with a few games, notably Teenagers from Outer Space, The Morrow Project and Empire of the Petal Throne. My escapades in Tékumel did not last much past a character-creation session and a brief, two-part adventure introducing players to the setting. I quickly learned that when players make up silly names for their characters the gaming endeavor is doomed to failure. I relegated the Tékumel materials to my roleplaying game collection on the shelf as a personal interest without any intention to play.

In 1993 Theater of the Mind Enterprises produced an impressive boxed game, Gardasiyal: Adventures in Tekumel, containing several books, folios, and a map, and later supported with several supplements. At this point in my interest with Tékumel I might otherwise have let this pass, except that most of this game incarnation focused on solitaire, programmed adventures. I put the game system and solo materials through their paces as proven by several handwritten character sheets still tucked into my rulebooks, but the rules and setting still proved too complex to try with gamers used to more accessible fare. Alas, the game soon met an untimely and unsupported “death” and, like its predecessors, mostly faded from the general adventure gaming hobby’s collective consciousness as another blip in Tékumel’s publication history.

The last incarnation of a game based in the rich Tékumel setting – Tékumel: The Empire of the Petal Throne – came out in 2005 from Guardians of Order. After much pre-release hype, previews of illustrations, and some sample teaser PDFs, the 240-page hardcover came out...and then Guardians of Order disappeared beneath a flood of overwhelming debt (an unfortunate yet occasional occurrence in the adventure gaming hobby). I bought a copy when it released and read it, though it ultimately saw no actual play and ended up on the shelf with the rest of my Tékumel game collection.

A far more complete game history resides at tekumel.com, a website devoted to the setting, and at The Eye of Joyful Sitting Amongst Friends. Copies of past games remain difficult to find through retailers, though they sell at premium prices on the secondary markets.

After Barker’s passing in 2012 his fans helped establish the Tekumel Foundation, a non-profit institution “to encourage, support and protect the literary works and all related products and activities surrounding Professor M.A.R. Barker’s world of Tékumel and the Empire of the Petal Throne.” Barker left a host of notes and other world-related materials that never saw publication, and the foundation seeks to preserve his memory and maintain the interest in his innovative setting. Tékumel fans remain a vociferous and productive minority in the overall population of adventure gamers. They continue creating material for and celebrating Tékumel across the internet at such aptly named websites as The Tékumel Project, Skein of Destiny, and The Eye of Joyful Sitting Amongst Friends.

Why is Tékumel so difficult for gamers to comprehend and enjoy? It’s a rich, deep, intricately devised setting...so alien in its origins and interpretation that gamers need to really immerse themselves in it to identify and understand familiar roleplaying game paradigms. Aside from a very different culture, Tékumel incorporates a host of strange and often savage deities, lost-tech-driven magic, and a bestiary of wildly alien monsters and races with names steeped in Barker’s fictitious language. This kind of ground-breaking originality can seem foreign to westerners raised on European legends, medieval history, and the fantasy fare perpetuated by books, comics, and films.

I’m excited to see – and to back – the latest gaming incarnation of Tékumel, Béthorm, in the knowledge Jeff Dee can produce an outstanding game product that receives the support and promotion Barker’s fantastic setting deserves. I’m hoping the rules engine Béthorm employs strays more toward the rules-light end of the game mechanics complexity spectrum. From what I’ve seen Jeff Dee not only has a love for the setting but a keen and clear means of expressing it and sharing the excitement it holds for adventurers.


Want to offer feedback? Start a civilized discussion? Share a link to this blog entry on Google+ and tag me (+Peter Schweighofer) to comment.
at 6:56 AM