Valley of the Ape “After Action” Report

Several weeks have passed since I ran Valley of the Ape at Williamsburg Muster, a small, regional miniature wargaming convention with a good selection of board games on the side. For miniature wargamers the “after action report” serves to document their experience and share with others the scenario components and outcomes. I offer my observations on my Valley of the Ape sessions more to illustrate the variety of strategies players brought to the table and what to me seems changing aspects of game conventions in general. 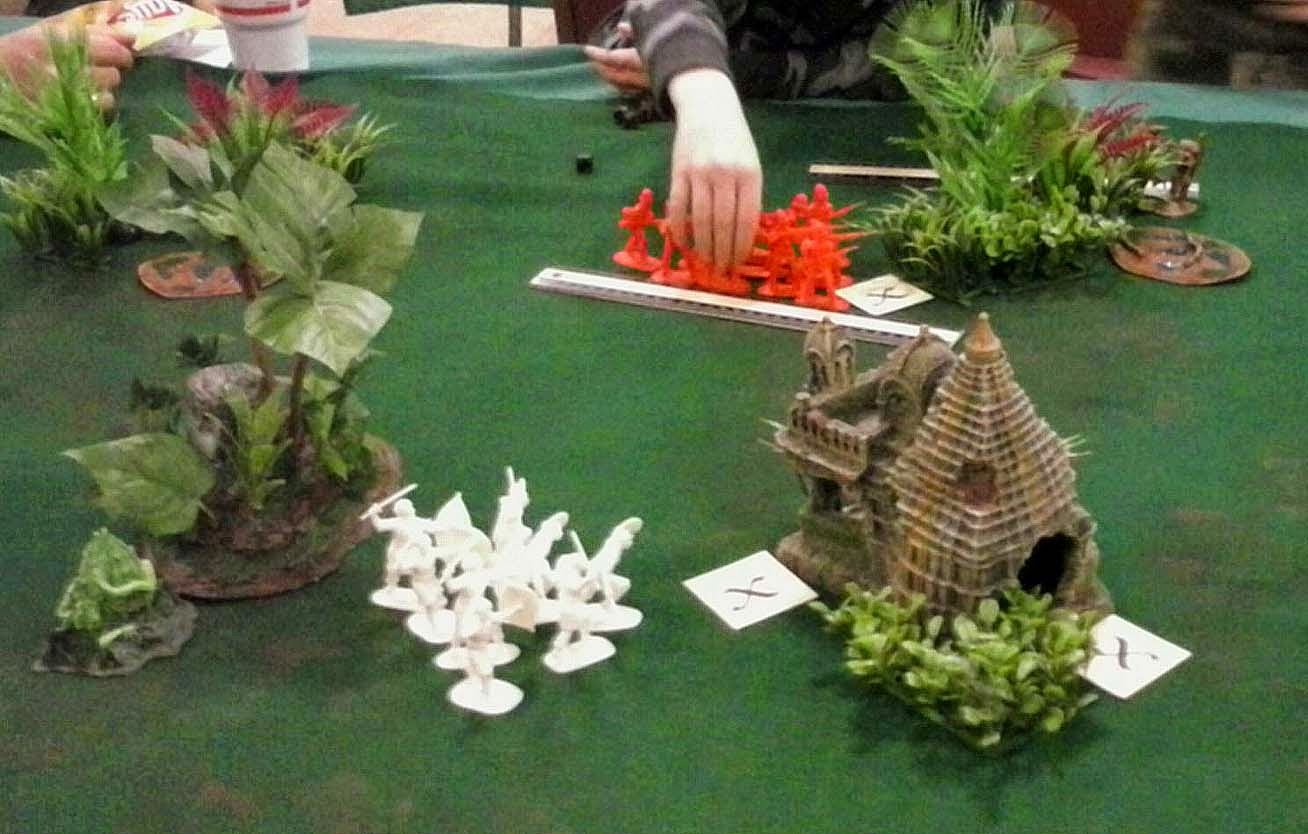 Positive experiences in actual play, especially at large public events like conventions, can not only validate a creator’s work but provide constructive criticism and encourage further work to bring the project to publication. I had a very positive experience running Valley of the Ape for its intended audience.

Scheduling convention games isn’t easy. One can’t usually coordinate with other events to ensure, for instance, your kid-friendly game isn’t running opposite another event specifically geared toward children. Instead I scheduled based on my own preferences, relying on my capacities as the referee and my perceptions of ideal times. I decided I’d run two, two-hour sessions. The short time span meant I’d only run one or two full games each session. With two sessions I could spread them across what I considered two times I felt would work for con attendees with kids, Friday night at 7 p.m. and Saturday morning at 10 a.m. The Saturday time seemed the riskiest for me, since game conventions sometimes get off to a slow start in the mornings. Both times filled up, though Saturday morning’s session started a bit late more from participants coming out of a kid-friendly Wooden Warriors game than anything else. I ran two full games Friday night and one long and late-starting game Saturday.


My Friday night session had five participants, two having to team up since the game seats only four. Saturday’s session included a father and son playing, a returning player from the night before, and an adult player who saw the empty seat and asked if he could join. I think the youngest we had was six years old; he managed well with some help from his dad and constant goading from his older brother.


Prior to the con I’d playtested the game with my five year-old son, the Little Guy, and made adjustments based on observations from those games and input from my wife (she’s responsible for the emphasis on capturing the giant ape instead of outright killing him). We’d also debated different approaches kids might take and theorized on which ones might dominate other strategies. I expected kids would take any of the approaches available to them...and frequently change them. Over three games with various players at Williamsburg Muster, no one strategy dominated, with some kids even varying their approach throughout the game.

Some stuck to one of the core, game-winning missions, either consistently moving near and shooting the giant ape or wandering around collecting treasures (or stumbling into hazards). One participant moved his soldiers around but remained wary of getting too close to the ape. Various players chose not to shoot at other explorer groups...then changed their mind and took pot shots later as opportunities arose. One kid – who played the big game hunter and his bodyguards in both sessions – managed to win two out of the three games through his dogged determination to focus not on treasures or other explorers, but on shooting the giant ape, wearing him down, and being close at hand to capture him at the critical moment.

I always enjoy watching parents play with or look over their children’s shoulders; it illustrates the wide variety of parental dynamics in gaming situations. Parental participation varied. Some dads just dropped their kids off while they played other games in the large, communal gaming hall (also shared with dealers, a concept I like). A few helped their kids play or played another explorer group alongside their kids, particularly fathers of younger children. Some came by later to watch and see how the rules worked, but let their kids make their own tactical decisions in the game.

Overall I found the experience positive on many levels; the games all went well technically, with the kids enjoying themselves; spectators and participants enjoyed the jungle terrain (which I’ve discussed before); I received many compliments about how much fun everyone was having and how engaged the kids seemed. The first game Friday night soon drew a handful of young onlookers who watched intently and waited patiently to join the next game. Nobody seemed bored, nobody seemed lost with the fairly simple rules, everyone liked the mystery of the encounter tiles (would they turn out to be treasures or hazards?) and the random nature of the giant ape. Fueled by player enthusiasm, spectator compliments, and three well-run games, I’m working on polishing the rulebook and game components, as well as preparing an adaptation for a cowboys versus dinosaurs “lost canyon” version of the game.

Despite its relatively small status with about 200 attendees, Williamsburg Muster, along with its sister convention, Guns of August, packs a lot of action into its hotel programming space, including large areas devoted to tournaments (typically Flames of War and Warhammer), board gaming, non-tournament miniature wargames, and vendors. While these observations emerge from a miniature wargaming convention, many might easily apply to other public demonstrations of adventure games, from game days at the Friendly Local Game Store (FLGS) and the game-oriented public library to small regional game and media conventions.

More Kids: Overall I noticed more kids at the convention actively participating in games. Not only did the schedule offer more child-friendly fare – including my own Valley of the Ape and the immensely popular Wooden Warriors – but some of the more involved wargames welcomed them and presented rules and scenarios in an introductory fashion. For instance, the Muskets & Tomahawks event offered two tables set up side by side, each with its own referee, one for more hardcore wargamers and a smaller one with a simpler scenario for more casual players, including a handful of kids interested in checking out the rules. The boardgaming room offered a library of games to borrow and a quiet environment where parents could sit down and teach them to kids. My two sessions of Valley of the Ape were packed with kids and garnered comments from bystanders about how much fun everyone was having. Some had participated in Panzer Kids playtest sessions at previous cons; after they joined my Valley of the Ape game this time around, they went on to try their hand at more complicated wargaming fare like Muskets & Tomahawks (not a game system I’d characterize as particularly newcomer or kid friendly). This particular con’s core layout – gaming tables in the middle of the main ballroom with vendors along the perimeter – has a wonderful community feeling and provides a relatively safe environment where kids can wander to examine dealers and games, shuttle between their own games and their parents’ pursuits, and feel a sense of belonging to a greater gamer community.

Player Engagement: Game conventions offer a variety of events that tempt attendees based on the subject, scenario, and game system. Matching the right game with the right players isn’t always easy based on event descriptions from websites or con programs. Not every game can offer every person the same satisfying play experience. I noticed many instances of players getting really involved in their games, comprehending the rules enough – or following a helpful referee who walked them through rules mechanics – that they connected with the game and had a great time. The Wooden Warriors game had an enthusiastic crowd (and edible snack objectives for the winners). The friendly Silver Eagle Wargaming folks running D&D Attack Wing demonstrations spent the weekend teaching the game and running games for a steady crowd of players (I joined in some of their Star Trek and X-wing events at the last con and they did a fantastic job reminding newcomers of the rules and refereeing in tight spots). The board game room had tables packed with engaged players. Here and there, however, I spotted some players who didn’t connect with the game they chose. I looked in on a few and noticed some similarities. These games used more complex wargaming rules for periods most folks wouldn’t consider mainstream. Despite the presence of player handouts, rules summaries, and unit stat cards some players understandably felt left out waiting for other players more familiar with the rules as they looked up particular mechanics in rulebooks, laboriously planned and debate their various moves, and resolved combat with numerous modifiers and die rolls. One player even commented that he’d been playing the game for two-and-a-half hours and had only made three moves the entire time. Not every game suits every kind of player; no doubt some gamers recruit players simply to have enough to run, especially after hosts set up elaborate wargaming dioramas and ranks of miniature. I’m not saying gamemaster should always cater their offerings to the lowest common denominator among con-goers, but some could exhibit more sensitivity to players who aren’t finding any engagement in the event. 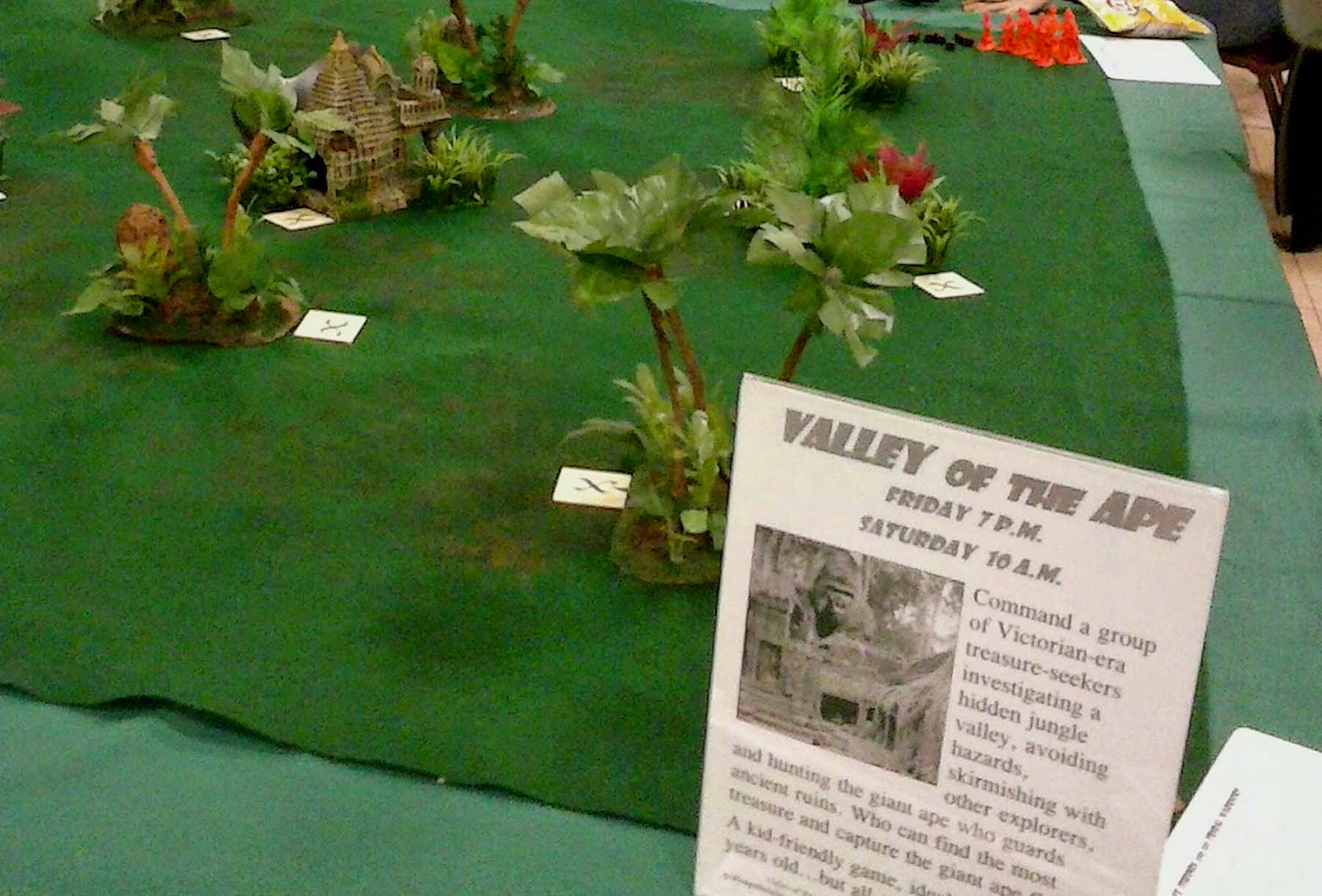 Engaging Displays: Miniature wargaming conventions offer a lush visual feast of dioramas covered in custom-made terrain and wonderfully painted figures; but more hosts focused on offering additional material (usually signage) in attempts to not simply “sell” their games to potential participants but offer useful play aids to guide them during the game. For instance, in my Valley of the Ape game I set up two sign holders with a promo sheet for the game on one side (with basic “teaser” info about the game and the scheduled times) and an outline of the game turn order and rules on the other. I left a few proof copies of the game rulebook here and there for interested onlookers to examine. Each corner on the table included everything a single player needed for the game session, including their plastic explorer figures, a ruler, dice, and a stat card summarizing the game turn and their explorers’ actions. Many other games offered similar teasers to inform and tempt gamers to the table: sheets summarizing the historical context of scenarios, signs touting the game system used, rulebooks to peruse, and copies of in-game player aids, stat cards, and rules summaries.

What lessons do these observations teach me? Know and cater to your potential audience. Stay sensitive to player involvement to ensure they remain engaged and satisfied in your game. Use signage and player handouts to enhance the game’s visual appeal and help them remain engaged. The adventure gaming demographics – and those of the convention scene – constantly change. As gamers and designers we must consider catering to newcomers, those with different play styles and interests, and longtime gamers who enjoy classic fare.

Comments....
Want to share your opinion? Start a civilized discussion? Share a link to this blog entry on Google+ and tag me (+Peter Schweighofer) to comment.
at 7:11 AM