Now and then I divert to the more academic realms of gaming to gain a different perspective on the adventure gaming hobby. In the past I’ve enjoyed such scholarly work as Professor Scott Nicholson’s excellent Everyone Plays at the Library, Stuart Brown’s Play: How it Shapes the Brain, Opens the Imagination, and Invigorates the Soul, and Greg Costikyan’s accessible and thought-provoking I Have No Words & I Must Design (among his many other insightful writings). This time I’ve ventured beyond the fringe of relevance and explored more about the subject of pure play with the wonderfully enthusiastic Bernie DeKoven. 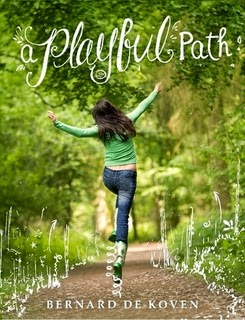 This self-proclaimed “game guru and fun theorist” has written several books, including the most recent (and free) A Playful Path; frequently blogs about his play activities, ideas, and realizations at his Deep Fun and A Playful Path blogs; and recently presented a TEDx talk on “The Politics of Public Playfulness” which touches on a frequent theme, gaining “permission” to play. He draws on a lifetime of experience and thoughtful reflection on human play activity. DeKoven challenges people to consider how play affects their lives, particularly adults who quite often view “play” as a child’s activity and have little time for it as a relevant pursuit in life despite being naturally playful creatures.

Anytime I read about or hear DeKoven speak on his work and his philosophies of play I’m reminded of a jarring experience in junior high school. I can’t recall I which class it occurred – maybe social studies or English – but students were asked what activities most often filled their after-school time. Many answered with some sport or another, while others had more artistic or academic pursuits. I had yet to discover Dungeons & Dragons or my love for voraciously reading science fiction and fantasy; my afternoons typically consisted of playing outside with my brother and other neighborhood kids, riding bicycles, building forts in the woods, or playing with Legos and other toys indoors. When asked what I did with my time I naively answered, “Play.” Everybody laughed and looked at me like I was some oddball. Here we were in junior high, mature seventh or eighth graders, not mere children in elementary school. Surely I should have been investing my after-school time in some higher pursuit than simple play. By that age, and in those transformative years between elementary school children and high school young adults, “play” was already not an acceptable activity.

I’m encouraged that folks from the adventure gaming hobby engage in public play, though most often in places where they feel they have permission to play: Friendly Local Game Store open play areas, public library events, campus gaming meet-ups. I’ve heard of events promoting reading roleplaying games in public settings. Certainly conventions of all sorts – from media and comic book to purely gaming cons – provide geeks with safe environments in which to play and revel in their hobbies. At conventions play activity manifests itself through elaborate costumes (appropriately called “cos-play”), discussion of fictitious characters and universes, and actual games. Pursuing gaming activities outside these safe “comfort zones” remains challenging yet can provide a fulfilling experience for gamers sharing their pursuits with others and overall positive exposure for the adventure gaming hobby.

An interview with Bernie DeKoven ran in a recent issue of the American Journal of Play; yes, such a periodical exists, freely available online in PDF, published by The Strong National Museum of Play. It’s worth reading alone for its insight into DeKoven and his life-long work examining play. But several statements in his interview struck me as having great relevance to those of us in the adventure gaming hobby, even if the kinds of games we enjoy seem quite a bit more formalized than the usual spontaneous, free-form fare DeKoven advocates (and incites):

Rules “Modding” Creates Community: DeKoven says, “The games I liked best were elegantly designed, well-crafted, and, most important, had rules that were simple enough so that they could be changed easily or as we said, ‘modded’.... Creative rule breaking like this is a generous impulse characteristic of what I described in the New Games Book as the play community – where players adapt rules to allow more people to play more fully.” While board and card games rely on firm rules, especially in tournaments, and don’t provide much room for “modding,” miniature wargames and roleplaying games revel in this invitation for participants to alter the rules. How many gamers have created their own, personalized “house rules” for games? How many times have gamers felt they could do a better job of designing a particular game and went ahead and did it themselves? This kind of philosophy might help explain both the emergence and popularity of the retro-clone “Old School Renaissance” (OSR) movement enabled by the Open Game License, allowing anyone to adapt, modify, and publish Dungeons & Dragons-style gameplay conventions within certain guidelines. Yet for DeKoven and gamers, “modding” is only half the equation; making these adjustments creates a community, whether it’s only the folks around the gaming table discussing “house rules” or people designing and publishing their own rules, sharing them with others, listening to feedback, promoting the games, and ultimately building a community of like-minded gamers.

Good Games Invite Playfulness: “I designed some games I am still proud of,” DeKoven says, speaking on some of the electronic games he created. “No, they weren’t best sellers. But they were unique. And they were fun. And they invited exploration and creativity – key attributes of playfulness.” Many roleplaying games rely on “exploration and creativity” on two levels; the in-game action of exploring a setting with characters created specifically for the genre; and the out-of-game exploration and creativity required in designing game rules and an engaging setting. All games invite players to explore the game through reading the rules and trying new strategies to win. They can also inspire players to go on and – as noted above – create their own variants and even design their own original games. I find the term “invitation” ironically appropriate here; it implies a welcoming into the community of play, yet, in the oft-fractious and proprietary world of gamers, we don’t always seem welcoming of new players, innovations, settings, editions, and other things that differ from our own tastes.

Social Contract: DeKoven addresses the concept of a “social contract,” the unspoken agreement of players gathering at the game table to follow complex rules for an entirely playful and seemingly unproductive pursuit. “All games are cooperative to this extent,” he says. “All games are based on our agreement to abide by a series of made-up rules for made-up reasons.” Whether players participate in a directly competitive game or a cooperative one, the very act of their sitting around the table playing by the rules amounts to a cooperative act.

Player Importance: “In cooperative games, the player is more important than the game,” DeKoven says. “The rules of the game, the goals, are constantly adjusted to optimize access to a shared community of play.” I interpret his use of “cooperative games” in the context of the quote above about players cooperating in a social contract. This emphasis on a “shared community of play” reiterates the most important part of many games: the reason we play games is to have fun together. All other considerations remain secondary to the bonds that play forges between gamers.


Want to share your opinion? Start a civilized discussion? Share a link to this blog entry on Google+ and tag me (+Peter Schweighofer) to comment.
at 7:41 AM