When I first began working at West End Game as the Star Wars Adventure Journal editor in the summer of 1993 I passed the massive TORG map every day. It sat in a windowless inner office in the second-floor offices (with the infamous shoe company and “management” downstairs). Someone had somehow acquired a huge, wall-spanning world map (possibly from National Geographic, it’s so long ago I don’t recall) and pinned on it different notations to show where each TORG cosm had invaded, such as triangles of yarn or construction paper circles. This was the map, the place where the game-designers could chart the progress of storm knights from across the gaming landscape. And it was already too late. 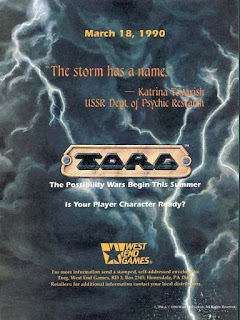 I never got into TORG, the game in which multiple dimensions or “cosms” of various genres invaded a near-future earth and the characters – heroic “storm knights” – had to foil their plans for world domination. But in its heyday in the early 1990s it tried charting new territory for roleplaying game campaigns...certainly new for West End Games. It launched in 1990 after an aggressive and enticing ad campaign. I remember seeing the color advertisements in Dragon Magazine, then perhaps still the best “pulse” of the gaming industry. They warned that a storm was brewing, with dark clouded, lightning-streaked backgrounds and ominous in-universe quotes from characters spanning several genres. The “Possibility Wars” were coming. It was going to be “A New Roleplaying Game Experience.” And it did pretty well initially. Several novels developed the setting from a literary perspective. The boxed set came with a slew of rule- and sourcebooks, three decks worth of cards, and two speckled 20-sided dice. The game line churned out an impressive slew of sourcebooks and scenarios, along with an occasional newsletter. I’d daresay it is one of the more notable creations from Greg Gorden and Bill Slavicsek.


The game incorporated new mechanics for West End that broke away from the d6-based system used in the popular Star Wars Roleplaying Game, a deliberate effort considering management at the time believed the game mechanics could not legally be extracted from the Lucasfilm ownership of the game world for independent use. In fact the name TORG was an acronym for “The Other Roleplaying Game” staff used in development while trying to settle on a more evocative name. These new mechanics incorporated the traditional dice, tables, and character sheets, but also included a Drama Deck of cards with advantages for characters and complications the gamemaster could throw at them. The multiple-genre aspect could potentially attract fans of different settings, from lost-world and pulp to cyberpunk and horror. Players could subscribe to the Infiniverse newsletter filled with rumors of the world-wide invasion and response forms about the gaming group’s success in battling against the multi-cosm invasion. This gave scenarios more significance since they could affect the course of the overall game campaign and, theoretically, the published game line itself. 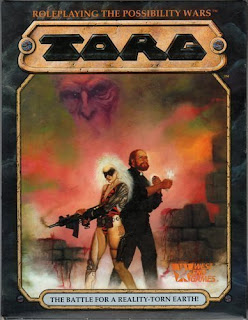 The game line editors charted these developments on the massive TORG map at West End headquarters. But by the time I began working there, the map was all but a relic. The ambitious “living” campaign element failed to take hold with a significant portion of overall gamers. Sure, some questionnaires from the Infiniverse newsletter returned and influenced the map, but the analog postal service could only foster limited engagement with players. Eventually West End published some supplements wrapping up the Possibility Wars and tying up loose ends for the few fans left. At some point during my five-year tenure there someone pulled out the pins and rolled up the map. The line editor moved on to bigger and better endeavors. The space became a work room and a library for the ever-expanding library of Expanded Universe Star Wars reference material. And, ultimately, West End declared bankruptcy in 1998.

In some ways looking at TORG’s failure serves to highlight some of the factors people might attribute to West End’s demise. TORG might have broken ground for player-engagement in an age of campaign-spanning meta-plots for game worlds, but the tools for such interaction were still in their infancy and beyond West End’s willingness to grasp at the time. Feedback from gamers relied on the physical mail instead of the burgeoning internet and e-mail. Even then such input was likely to have little influence; I’m sure the line editors and management had heated debates about whether to pursue their own visions for the game line or incorporate the influences from fan reports of actual play. The original game system certainly stood apart from the d6 system used in the Star Wars game – one refined for Shatterzone and used as the basis for the Masterbook system – but it catered more to hardcore roleplaying gamers than casual fans who drove sales for popular licensed settings. As Star Wars dominated – taking up production finances, staff time, and freelancer resources – other game lines suffered. These aren’t the sole reasons for West End’s demise, but some of the elements that contributed to that unfortunate end.

TORG has certainly tried coming back from obscurity. I vaguely recall having several conversations with West End owner Scott Palter about reviving it as a differently-named game with the same “other dimensions invade earth” premise. After the bankruptcy various other companies, including versions of West End, tried reviving it with little success. It’s been 25 years since its publication; perhaps the nostalgia market will bring about its return.

I have a very second-hand perspective on TORG. I never worked on the game line and only followed developments as they affected the Star Wars roleplaying game line. I was always tempted to immerse myself in it, yet never found the time or enthusiasm. I still own the original boxed set with drama deck, dice, and the first Infiniverse newsletter, one of those “gaming artifacts” from my West End Games days I’m loathe to part with for some reason. Maybe to give it a chance some day. Maybe for reference as a relic of what could have been. The game impressed me with its ambitious, player-influenced campaign – clunky in its execution and dependence on what we’d eventually call “snail mail” – even if that engagement existed only as an ideal.