Artifacts from the Vault of Schweig

I’m culling some of my roleplaying game library and reorganizing the shelves to put more relevant material in more central areas. In doing so I uncovered a few intriguing artifacts I often forget about yet keep for various reasons. Some come from an appreciation of the designers, others for the significance of the games in the overall context of adventure gaming’s history. They offer an interesting window into what engaged me as a gamer over more than 35 year in the hobby and the diversity of publishing efforts from a variety of sources. 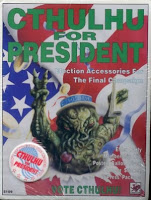 Cthulhu for President Pack: I ordered this by mail way back in 1992, possibly the first year Chaosium offered it. Despite leaning in one particular political direction thanks to my wife’s enlightening influence, I still staunchly believe in the Elder Party ticket. This packet came with a button, posters, leaflets, Elder Party membership card, and other goodies. I’m resisting the temptation to print a slew of flyers to leave around town, but I’m afraid they’d figure the guy with several Cthulhu-themed t-shirts and the Cthulhu “fish” on the back of his car was stirring up trouble....


Risus: I love Risus: The Anything RPG and admire creator S. John Ross’ contributions to the broad gaming landscape as an independent publisher and designer (and, personally, as a friend). Organizing my game shelves I collected several bits of Risus goodness that now reside together. One of the true artifacts is a photocopied, stapled booklet of the Risus rules (including the Big List of RPG Plots) S. John Ross gave me at a convention in Virginia. According to the copyright (1998) he was living in Fredericksburg, VA, at the time (I was in Honesdale, PA, one year before moving to Williamsburg, VA, in the wake of West End’s bankruptcy). Risus has since undergone several revisions in both text and graphic design, but I keep this booklet to remind me of S. John’s independent spirit in publishing his own, quite excellent game without the support of a corporate publishing infrastructure. Other bits of Risus I own include a print copy of Pokethulhu, a version of Uresia: Grave of Heaven published for the late Guardians of Order’s Big Eyes, Small Mouth anime/manga-themed game, a binder with a color print-out of Points in Space, and a loose-leaf binder with print-outs of various editions of Risus, the Big List of RPG Plots, the solitaire Ring of Thieves, Pokethulhu, other projects, and a sheet of notes containing some of S. John’s game-writing wisdom. 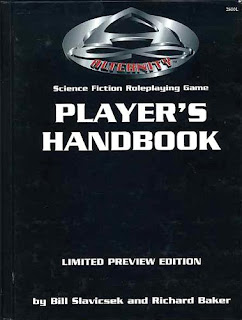 Alternity: At GenCon in 1997 TSR promoted its upcoming science fiction roleplaying game, Alternity, by releasing the Player’s Handbook for the Alternity game in a “limited preview edition.” The book had no cover illustrations, just a black background on which the logo, title, and sales copy sat. It relied on an interesting and not terribly elegant system of players rolling a d20 as a “control die” and then adding or subtracting the result of another polyhedral die to represent a task’s difficulty. I picked up a copy and kept some of the ephemera for it, including a preview booklet with player and gamemaster rules and a print-out of co-designer Bill Slavicsec’s solitaire tutorial adventure. The flyer listed an April/May 1998 release date, around the time Wizards of the Coast bought a financially failing TSR. The game still saw release under Wizards of the Coast, though the game and its handful of settings found (and probably still have) avid fans.

Promotional Ephemera: I have a host of promotional flyers and booklets for various games, most of which have since passed into distant memory. Some offer brief vignettes and character stats to provide some sense of the setting and mechanics. I particularly like the ones that include self-contained, quick-start rules with an introductory adventures to give prospective players some idea of the mechanics and production values. Gamers sometimes leave these bits of ephemera by the wayside, yet they’re important in the overall history of gaming developments to demonstrate how companies previewed and promoted new game releases.

Foreign Editions: Thanks to my time with West End I acquired a host of foreign-language editions of gaming products. In my youth I had a solid command of German – though what remains is still enough for some basic understanding – so I tended to pick up German-language materials. Some just have straight translations with the same artwork and layout, while the more interesting ones have different cover and interior artwork and different (sometimes better) production values. I have German-language editions of GURPS, Paranoia (featuring the “Actung! Satire!” warning prominently displayed on the box), Die Traumlande boxed set for Call of Cthulhu, Die Festung auf der Wetterspitze and Die Gesetzlosen von Dor Rhunen for Middle-earth Role Playing, and a host of German-language Star Wars roleplaying and board game materials: Angriff auf Hoth, a second-edition rulebook. (I also have some Star Wars roleplaying game materials in Spanish, Italian, and French.)

Raining Hammers: I’d totally forgotten I owned this. It’s a huge, 400-entry interactive fiction solitaire gamebook an old friend gave me long ago. I’d completely forgotten about it, even in my recent explorations of solitaire gamebooks. Although the Old West has never really engaged my interest, it’s one I’m currently seeking to explore through gaming; I’m sitting down with this one soon to play through and see how long I last. The system provides for both a simple “difficulty roll” based on the situation or entire character mechanics more like those found in roleplaying games (a step above most solo gamebooks). It’s going in the newly established shelf for solitaire game books and interactive fiction near my “to read” pile and the shelf of games immediately on my radar (mostly OSR titles). 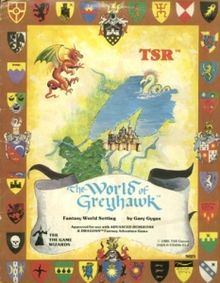 D&D Ephemera: My World of Greyhawk folio contains several D&D oddities stashed inside (beyond the amazing color maps and the gazetteer): the copy of Swords & Spells I got early in my fascination with D&D without really knowing what it was about; the cardboard-mounted AD&D combat wheel from Dragon Magazine; my own D&D gamemaster screen, four pages of typewritten charts pasted to cardstock; and the “Weather in the World of Greyhawk” cardstock foldout section (also from Dragon Magazine) filled with charts along with my own hand-drawn forms testing the system.

Homemade Star Trek Game: I received this self-published, unofficial Star Trek: The Next Generation roleplaying game from someone I knew through my work at West End Games. The 162-page, comb-binding tome (including cut-out cards for damage in starship combat) emerged during the height of Star Trek: TNG’s popularity yet before any corporate publisher had secured the licensing rights to produce an associated roleplaying game. For the time (the mid 1990s) it was a well-conceived effort in the absence of any current game covering The Next Generation era, though it was soon eclipsed by two such efforts by established publishers (Last Unicorn Games and Decipher). In briefly perusing it I realize the game contains some well-articulated guidelines for roleplaying in the “storytelling” chapter (right up front), the use of “commercial cards” to enable players to call for a break in the action or advance the plot to a relevant point, and the suggestion that players – ostensibly running command-crew characters – occasionally play the non-player character lower-level crew members on away teams. It serves as an early example of professional-level games by what some might consider “amateur fans.”

Sorting through my roleplaying game shelves I culled a few titles for sale/trade, mostly books I’d edited or used in freelance editing reference. I keep some games solely for what I perceive as their impact on the adventure gaming hobby, things like Vampire: The Masquerade (which I actually ran once, though not very well), Shadowrun (as a fantasy dark future contemporary to Cyberpunk 2020), way too many attempts at Victorian-themed roleplaying games, and All Flesh Must Be Eaten (despite my current aversion to zombie/horror themes). Some – like Alternity – are interesting design paths that failed yet have kernels of good ideas and inspiration. A few I keep as examples of how not to go about producing roleplaying games (which shall remain unnamed).

Comments....
Want to share some “artifacts” from your own roleplaying game collection? Start a civilized discussion? Share a link to this blog entry on Google+ and tag me (+Peter Schweighofer) to comment.