I don’t talk much about “news” or “new releases” here at Hobby Game Recce; it’s often fleeting and doesn’t seem to matter months or years down the road. But now and then a few gaming products release that catch my attention for one reason or another...and this just happens to be one of those times. Announcements by three different companies promise some notable wargaming products that cater to my own interests and hopefully engage the enthusiasm of other gamers: a Wings of Glory Battle of Britain starter set; a Commands & Colors game set during the American War of Independence; and some interesting terrain and tank kits from Battlefront Miniatures. One things certain with all these releases: I’d better start saving up my money if I want to buy any. 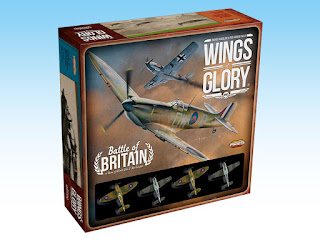 Wingsof Glory Battle of Britain Starter Set: I’m a huge advocate of the “starter set” concept for introducing newcomers to the adventure gaming hobby, whether roleplaying games, card games, or wargames (of either the chit-and-board or miniatures variety). Ares Games’ Wings of Glory game (which got its start in 2004 as Wings of War) had some fits and starts over the years and really didn’t catch on in the American gaming market as much as the organized play-driven Flight Path games like Fantasy Flight’s Star Wars-themed X-wing miniatures game and WizKids’ Star Trek: Attack Wing. I’ve recommended Wings of Glory before as a good, casual World War II-themed game. Back in 2012 I wrote about one of the steps Ares took that worked better to present the game to audiences: the World War I Wings of Glory duel packs featuring the rules, counters, and two airplanes with stands and maneuver decks, all for a reasonable gateway price of $30. Now the company is trying the starter set approach again, this time for the World War II version and the Battle of Britain. Unlike the previous set, this one comes with four planes, two British Spitfires and two German Messerschmitt Bf 109s, along with the usual rulebook, scenarios, control panels, stands, maneuver decks, and everything else needed to play. It might serve as good gift to tempt friends or kids into the game, especially those with an interest in World War II aviation; it would certainly set up newcomers with enough rules and planes to simulate dogfights from an iconic, pivotal aerial battle from World War II. That said, I fear the $70 price point remains too high for newcomers seeking to try the game. I certainly appreciate including four aircraft in the set, but just one British and German plane – like the ones offered in the World War I duel pack – would provide a satisfying game experience. This product probably won’t appeal much to Wings of Glory fans who may have already collected planes for the game most likely have enough to run relevant historical scenarios such as the Battle of Britain; it was one of the World War II aerial engagements for which I bought certain planes, so I already have enough Spitfires and Messerschmitt Bf 109s, as well as a few Hurricanes, a Bf 110, and a Heinkel 111 bomber for good measure. If you’re willing to spend $70 to try a new game outside the mainstream board and roleplaying games, the Wings of Glory Battle of Britain Starter Set offers a complete package for an exciting historical period. 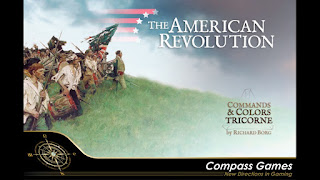 Commands & Colors: Tricorn – The American Revolution: I’m a fan of Richard Borg’s Commands & Colors series of wargames; call them battle games or wargames light, they’re still excellent games to explore these historical conflicts, possibly more so for casual players who enjoy board games but haven’t yet tried chit-and-board or miniature wargaming. They rely on several elegant components and mechanics: terrain boards divided into left flank, center, and right flank, with hexagonal terrain tiles enabling players to set up any historical scenario; command cards that enable players to activate different combinations of troops each turn; custom dice with sides corresponding to different troop types; and either plastic pieces or wooden blocks with illustrated stickers to represent units. Subtle nuances in the rules and customized components enable players to explore warfare in several historical periods: ancient warfare (Commands & Colors: Ancients), the Napoleonic Wars (Commands & Colors: Napoleonics), the American Civil War (Battle Cry), World War I (The Great War), and World War II (Memoir 44). With the latest game, released through a Kickstarter campaign run by Compass Games, Borg adapts his Commands & Colors system to the American War of Independence (or AWI, wargamer parlance for America’s “Revolutionary War”), one of the historical eras that engages my interest. The game employs similar components to past games, including the board and terrain tiles, troops represented by wooden blocks with stickers, custom dice, and a rulebook with plenty of scenarios to play. The game provides unique combat card decks for the Americans and British, a departure from past games. A variable scale enables players to re-fight huge battles with brigade-sized units or smaller skirmishes with company-sized units (I’m interested to see if it’s suitable to replay one of my favorite AWI skirmishes, the Battle of Ridgefield, fought in the town where I grew up). I’ve talked about Memoir’44 and Battle Cry before: both as games with excellent replay value; Battle Cry upon its release by Avalon Hill in 2010 (an example of that outdated news post); and Memoir ’44 as a good, casual World War II-themed game. I fully expect Commands & Colors: Tricorn will live up to past games’ high production values, engaging gameplay, and solid replay value. Like other Commands & Colors game, this one comes with a hefty price tag: $80 (plus $15 shipping). Much of this comes from the wooden blocks used instead of molded plastic units. While I prefer the plastic pieces in Memoir ’44 and Battle Cry to the stand-up wooden blocks with illustrated stickers, it’s a tempting purchase for those who enjoy Borg’s approach to these historical conflicts. Nothing prevents players from customizing these games into showpieces: they can paint miniatures to match the troop types, or even transpose the board and modular hex terrain to a larger hex-printed cloth field to convert it into a miniature wargame. 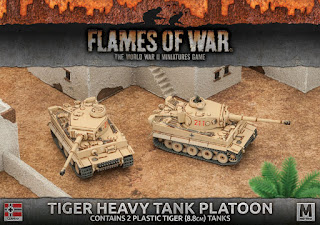 New Flames of War Materials: Battlefront Miniatures recently launched a fourth edition of its popular Flames of War World War II miniatures game. I’ve tried Flames of War a few times, once at a regional game day in an expertly run, tank-heavy demo game, and a few times on my own at home (before developing my own World War II tank game to teach children the basics of wargaming...Panzer Kids). While the rules have layers of complexity that don’t appeal to me, the game line produces some first-rate miniatures and terrain that, conveniently enough, serve to enhance my own newcomer-friendly Panzer Kids games. To support the new edition the company’s releasing a host of related accessories geared toward wargaming the North Africa campaign, a personal favorite of mine. While I’m not too interested in the gaming supplements tied to Flames of War (the Desert Rats and Afrika Korps army books), but I’m really excited about some of the battlefield terrain and tank models. A boxed set includes two plastic Tiger tank models for $18, about 50% more than the price of a single resin-and-metal tank miniature, though with a bit more complexity behind the assembly on par with a plastic model. (Battlefront Miniature seems to be transitioning all its models to this plastic-model format.) The relaunch also offers several other tank boxes for this theater, though my own forces seem fairly well stocked aside from the Tigers. For those unwilling or unable to model fire and smoke to indicate battlefield wrecks, Battlefront’s selling flaming “Destroyed Markers” and “Smoke Bombardment Markers” ($13 each), simple three-dimensional constructs that’ll look good on the wargaming table. A host of desert terrain and buildings can further enhance the battlefield; I’m particularly tempted by the “Desert Escarpments.” While the Tigers and flame/smoke markers seem reasonably priced, the buildings and terrain carry heftier price tags ($25-$40 depending on the size), well worth it for the quality, detail, and professional paint job. Gaming mats seem all the rage for wargamers today, and Battlefront hasn’t overlooked that: it’s offering a double-sided, 4x6-foot mat with desert terrain on one side and grass on the other. It’s pricey at an estimated $90, but looks fantastic and could serve almost any game set in those environments. The Battlefront website currently lists the mat as “Delayed,” but it certainly seems like a quality product for those who want a detailed play surface (or one better than the paint-splotched tan felt I use for my games).

These new products certainly engage my various interests in historical wargaming, though I’ll have to carefully consider whether and when I really can afford the high price tags. I suspect the Wings of Glory Battle of Britain Starter Set will remain available through hobby and online channels for a while, though I’ll admit it’s the lowest one on my priority list. The Battlefront Miniatures terrain might fly off the shelves upon release, but my Friendly Local Game Store gladly place special orders for customers, so I might take that route at my leisure. The most time sensitive release, Commands & Colors: Tricorn, ends its Kickstarter funding campaign on May 26, so I have a little over two months to consider this and save up the money if I want to support it. As Kickstarter campaigns go this one is more of a pre-order, with estimated delivery in July 20017, so one isn’t waiting too long for the product to deliver, barring any unforeseen delays that seem to be the bane of many Kickstarter projects. I might also keep my eye open for deals on these products at upcoming conventions. All of them offer some engaging historical wargaming, with opportunities for introducing newcomers young and old to the hobby.