The Temptation of Random Tables 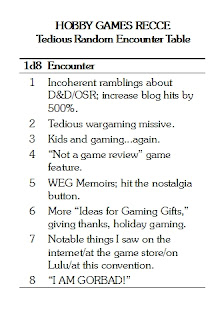 Random tables remain a staple of roleplaying games. They determine random encounters, character backgrounds, treasure and magic items, monster and retainer reactions, or even form the basis for an entirely random dungeon or hex crawl (among a great many other things). They’re a temptation for both gamemasters and game designers, offering quick means to generate encounters and add another layer to an adventure or setting. They serve as prompts, providing a host of ideas in a succinct format to roll or choose. Part of the responsibility for their successful use depends on how designers present table information and tie it to the existing setting or scenario. Part of the responsibility depends on how gamemasters implement a random table result into their game. Random tables run the risk of seeming lazy tools rather than inspiring enhancements.


The roleplaying game hobby has long relied on random tables. The Dungeon Masters Guide alone uses tables to help gamemasters determine random wilderness terrain, encounters (including the infamous wandering monsters), monster reactions, specific treasures for monsters, aspects of non-player characters, and high-level character followers. Gary Gygax himself used extensive tables in his numerous Dungeon Masters Guide appendices to outline random dungeon generation, monster encounters, traps, tricks, and dungeon dressing, setting a precedent in dungeon design. Random tables for the backbone of many solitaire game experiences. Many other games across genres have used random tables in various ways, from determining a character’s past history (such as the lifepath from Cyberpunk 2020) to granting characters mutations in science fiction games. Different games and supplements have relied on random tables to varying degrees, some almost completely and some not at all. I remember a distinct lack of random tables in West End Games’ Star Wars Roleplaying Game materials (though I’m sure I’d find a few if I looked). Some supplements like Kabuki Kaiser’s Ruins of the Undercity or Richard J. LeBlanc’s D30 Sandbox Companion consist of little more than random tables – heavily weighted with thematic elements – with a few notes on their use in play. I found Davis and Galer’s The Hex Hack offered significantly longer entries than standard wandering monster fare; it showed me randomly generated elements didn’t have to conform to brief monster lists and room contents.

Some of my favorite roleplaying game products use random tables to good effect. Chaosium’s Thieves World boxed city setting relied on a host of tables to fill different neighborhoods with various businesses and then populate each area with random encounters with denizens characteristic of Sanctuary. Many such encounters involved factions and personalities integral to the fiction upon which the setting was based. Cyperpunk’s Night City Sourcebook took a similar approach, with each urban zone enhanced with an encounter table inspired by the locations and personalities outlined in the related section; each encounter presented a conflict for the characters to navigate. The Thrilling Locations supplement for the James Bond 007 Role Playing Game included “encounter matrices” for each type of glamorous location covered, with broad encounter types further defined with a host of situations incorporating various espionage tropes (such as “Beautiful Foil,” “Shady Contact,” “Fellow Secret Agent” and “Major Villain”). Each of these sources used random encounters to further enhance and offer inspiration related to the setting.

I have random tables on my mind lately. I’m diverting from my current project to develop a briefly outlined fantasy setting, indulging my inspiration to explore some new territory, try a few different approaches, and revel in the enjoyment of creating material useful in a B/X Dungeons & Dragons game (or any OSR game, for that matter). After drafting brief descriptions of notable locations I wandered off to write a bit about the local knightly order providing peace and justice...which also diverted me into a brief bit describing how this region handles crime and punishment. All standard material I hope I’ve infused with enough mysteries and built-in adventure hooks to interest readers and inspire players. Then I thought perhaps I should include a random wilderness encounter table, just to offer some ideas what adventurers might encounter on the roads between settlements. Looking to B/X D&D for inspiration I lamented that the wilderness (and even dungeon) encounter tables result in rather bland results, such as “Driver Ant (N) 2-8” or just “Bugbear” (as rolled on the “Subtable: Humanoid”). Gamemasters of varying talents and approaches use such results to different effect; these can feel like tasteless filler or serve as the inspiration for engaging encounters. Take that bugbear result. A lazy gamemaster might handle it as a straight monster encounter: “Uh-oh...wandering monster. Three bugbears attack you.” This (admittedly exaggerated) example handles the randomly determined monster as a game mechanic springing from the stereotype that most fantasy class-and-level games focus on killing monsters and taking their stuff. But an artful gamemaster might describe it less as randomly encountered monsters with the presumption characters will fight them and more as a challenging encounter more related to the characters than the game mechanics: “You hear voices ahead...three bugbears are having a heated argument that seems to involve the trussed-up cow nearby.” This presents the random encounter as an element in the story the characters must overcome...and not necessarily through combat.

I found my indulgence in random tables – using their appeal to gamers – poses a challenge to avoid laziness and engage creativity in the service of the setting. So I started infusing my random encounter table with slightly more engaging material, such as “Crumbling stone foundation (probably once a cottage) with an old chest sticking out of the nearby midden pile. Moving or opening the chest disturbs a nest of angry rats living inside it, with no treasure within.” Soon I realized I could also include different random encounter tables for different regions within my setting, with the challenge of making each one representative of the specific area and the adventuring potential it offers. Random encounters offer a utilitarian opportunity to define setting elements through character interactions rather than relying on long textual descriptions and comprehensive entries covering every aspect within the setting. It’s a move away from the broadly encyclopedic and closer to intimately specific, with the goal being to offer some evocative elements with which the characters can personally interact. If I can harness the appeal of random tables to attract gamers, perhaps I can inspire them with encounters tailored to reinforce the setting.

Want to share your opinion? Start a civilized discussion? Share a link to this blog entry on Google+ and tag me (+Peter Schweighofer) to comment.
at 10:19 AM