I’m re-reading M.A.R. Barker’s novel Man of Gold and it’s drawing me back into the rich, complex, distinctly non-western roleplaying game world of Tekumel. I’ve discussed this setting before (“Tekumel: The Lands of Joyful Addiction”) and how, despite the vast depth of the game world, I can never quite dive into it at the gaming table, at least for very long. After some reflection I’ve identified several reasons for this, not necessarily limited to Tekumel but particularly to games with esoteric settings. They all feed my growing list of elements I feel necessary in a good roleplaying game core rules set beyond basic, intuitive, yet easily adaptable mechanics (no doubt fodder for future Hobby Games Recce posts). But I want to concentrate on one aspect often missing from the various incarnations of Tekumel-based roleplaying games that could help make them and other games more easily accessible: adventure seeds and outlines.

Many roleplaying games face a double challenge: teaching a set of rules for running the game and imparting a solid sense of a sometimes unique setting, particularly what kinds of adventures characters can experience (a topic I’ve also explored in the past in “Introducing Newcomers to Games: Theme & Mechanics”). Some game worlds don’t need much explanation, such as those based on familiar historical periods (such as Western European-based medieval fantasy) and popular media properties (I’m looking at you, Star Wars). Even those could employ adventure seeds and outlines to help give newcomer gamemasters some ideas what kind of action could take place in that world as well as provide more seasoned gamers with inspiration for further scenarios.

Before diving into some specific experiences from my own gaming past, I should define what I mean by an adventure “seed” and “outline.” An adventure seed offers a brief premise for a scenario with some ideas on engaging encounters and obstacles, though the actual resolution remains up to the characters. (The Wise Man of the Mountains once made a clear distinction between an adventure “hook” and an adventure “seed,” the former being more of a lure for characters, a hint of adventure potential with no actual specifics for a gamemaster to develop as to the actual adventure, while the latter offers a very brief adventure synopsis including a specific challenge for characters to confront and solve). An adventure outline gives more specifics than a seed, including an encounter structure (for those relying on a relatively linear format) and more information on foes and other challenges...not quite a full adventure, but enough a good gamemaster could run something with minimal preparation. No matter how (or whether) a gamemaster uses seeds and outlines at the game table, in the rulebook they serve to illustrate what kinds of escapades characters might experience within the particular game world, providing examples and inspiration to help gamemasters run their own scenarios. 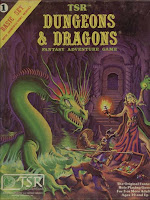 I had some idea what Dungeons & Dragons was all about when I first discovered the Moldvay edition of Basic D&D. I’d seen friends play it once or twice before. I was steeped in Western European myth and legend, loved Ray Harryhausen stop-motion films, and was just discovering fantasy fiction through Tolkein’s The Hobbit. I probably spent more time trying to wrap my head around how exactly all these stats and rules worked to run a roleplaying game. But Moldvay’s “Part 8: Dungeon Master Information” section certainly helped me transition from the record-keeping and rules-referencing of the game mechanics to the important business of creating engaging plots and challenges for my players to explore...even if much of that turned out to consist of dungeon delving. Here Moldvay offered ten adventure seeds in his “A. Choose A Scenario” section, everything from “Exploring the Unknown” and “Investigating A Chaotic Outpost” (using examples of existing B-level published modules) to “Escaping from Enemies” and “Using A Magic Portal.” Each seed offers a basic premise and some ideas for challenges characters might face. Combined with the rest of the chapter – choosing a setting and monsters, mapping ans stocking the dungeon – and the “Haunted Keep” example Moldvay illustrated exactly what kinds of D&D adventures one might enjoy. Certainly modules like B2 The Keep on the Borderlands (included in each copy of the Basic D&D boxed set) helped reinforce these concepts, but having at least a few seeds in the main rulebook served as a springboard for scenario inspiration.

Spending my high school years immersing myself in D&D and similar fare gave me a solid grounding in roleplaying game mechanics and setting elements. About the only difficulty I encountered relating to a game’s setting came when a friend ran Call of Cthulhu, which offered a much different adventuring paradigm than D&D. In college I picked up West End Games Paranoia (second edition) which, while I don’t recall any adventure seeds making an impression on me, demonstrated the darkly humorous, dystopian setting through a programmed solitaire tutorial adventure (another one of my essential rulebook elements). 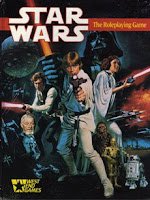 My next setting challenge – believe it or not – came from West End’s Star Wars: The Roleplaying Game. I’d been a Star Wars fan since 1977 and a gamer since 1982, but for the life of me I couldn’t envision what kinds of characters or adventures I could have beyond the heroes and events from the films (please bear in mind that when West End published the game in 1987 Star Wars as a fad had all but passed, with few new novels, comics, or other media to expand the universe or fuel fandom). But I found plenty of inspiration in the rulebook’s ten “adventure ideas”...really detailed outlines reinforcing the scenario format demonstrated in the earlier gamemaster scenario. Running about half a page (give or take) each adventure idea began with a sample opening dialog (similar to the “scripts” used to introduce early published Star Wars scenarios) followed by several “episodes” detailing encounters and plot progression, along with occasional “staging hints” to accommodate various character template types, flesh out the setting, and otherwise run the action in a suitably cinematic style. Having chapters devoted to running and designing adventures helped put gamemasters in the right frame of mind with the rich toolset to blast into Star Wars action. The Origins Award-winning rules received praise for not only crafting an accessible, intuitive game system but demonstrating and encouraging a cinematic play style.

I was well into my gaming and game-publishing career when Pinnacle Entertainment Group released Shane Lacey Hensley’s Savage World game line (evolved from his signature Deadlands game), a core book supported with setting supplements that used the range of polyhedral dice in a cinematic system for a variety of genres. Beyond presenting information about the setting and customizing it to the core rules, each supplement also offered a detailed “plot point campaign” consisting of related adventure outlines (similar in substance to those in the Star Wars rules) forming a campaign storyline the characters could follow. These ultimately had the same effect as adventure outlines, building on the setting information presented earlier in each sourcebook and illustrating the kinds of escapades characters could experience with enough elements to run a scenario. 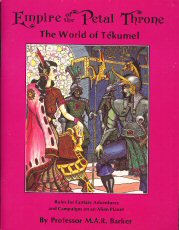 Alas, each roleplaying game incarnation of the Tekumel setting seems to fall short providing gamemasters scenario inspiration that truly reflects the world’s unique elements. Most spend entire chapters detailing the complex aspects of Tekumel – the distinctly non-Western society driven by hierarchical clans, wholly alien races and monsters, long-lost civilizations and millennia-long histories, different social norms and numerous societal rules, factional intrigue, gods of Stability and Change, all peppered with completely new words crafted with an attention to detail to rival J.R.R. Tolkein’s work – and often use as much space for the equally intricate game mechanics in each original roleplaying game. But how does a gamemaster put that all together to collect a functional character group and send them on an adventure that both entertains and highlights the setting’s unique features? 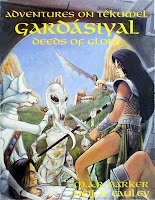 The earliest incarnations of Tekumel relied heavily on game mechanics with a similar complexity as early Dungeons & Dragons, a trend regrettably followed by many more recent versions. I wouldn’t expect games of that period to offer practical inspiration on creating scenarios (despite the presence of Moldvay’s excellent pages of advice in Basic D&D). One would think later efforts, though, might benefit from extensive gamemaster advice as demonstrated in such fare as the Star Wars Roleplaying Game. Theatre of the Mind’s Gardasiyal: Adventures on Tekumel (1994) – a huge, boxed affair chock full of rulebooks, dice, and numerous booklets – walked players through character creation but failed to provide an easily accessible framework for inspiration through adventure seeds or outlines. Much of its advice on running adventures in Tekumel came in the form of a broad essay about the kinds of action possible in fantasy roleplaying games, but little demonstrating those in terms of adventure seeds or outlines or even sample scenarios. Guardians of Order’s Tekumel: Empire of the Petal Throne (2005) offers a brief chapter on “Game Mastering Tekumel” at the back of the rulebook, but no adventure seeds or outline, and actually no sample scenario (another feature I find lacking in many roleplaying game rulebooks). Jeff Dee’s Bethorm (2014) from UNIGames also lacks solid gamemastering advice despite its comprehensive game system, integration of Tekumel lore, and numerous illustrations. Of course each of these games stands on its own rather impressive foundation of game mechanics and near-encyclopaedic coverage of Tekumel’s numerous nuanced elements. Most include subsequently published adventure that, in their own right, help illustrate the kinds of action one can experience at the game table. But I regret I find them lacking in advice for gamemasters in creating and running adventures in Tekumel’s rich, unique setting.

Tekumel struggles to connect with new gamers on two levels that often prove to overwhelming: the game mechanics and the esoteric setting. Designers often spend a great deal of time detailing the rich setting and conforming it to a game system, but rarely examine how to practically impart advice on bringing it to the table. Tekumel has its small but devoted fellowship of enthusiasts; I consider myself but a humble dabbler who must reconcile its exotically unfamiliar nature with his personal urge to make roleplaying games – especially ones as unique as Tekumel – more accessible to newcomers.

As usual I’m all hot air and no action. So here’s a challenge I’m setting for myself as a game design/writing exercise...and a challenge to Tekumel fans to help make the setting more accessible. Take one of S. John Ross’ ideas from The Big List of RPG Plots and adapt it into an adventure outline for an introductory level scenario based in Tekumel. Try integrating at least one notable feature from the setting, if not more. (I’m already thinking about something at an abandoned sakbe road guard tower...). And if you’re not a Tekumel fan, pick your favorite roleplaying game setting – preferably something beyond the norm – choose a plot from the list, and craft an adventure outline out of that. Those found in the first edition Star Wars Roleplaying Game and the Savage Worlds plot point campaigns mentioned above serve as solid formats from which to work.