A Gaming Artifact from Trilemma 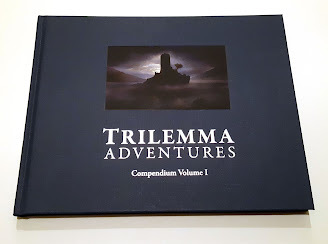 Artwork and production values in roleplaying game books vary greatly. They’re often constrained by the publisher’s limited budget, sometimes consuming even more financial resources than the actual content itself. Even then high production value and amazing artwork can’t make up for poor design and writing. Certainly Internet Age phenomena like Kickstarter and Patreon have enabled more creative people to release their gaming materials without the infrastructure of traditional print publishers...though quality on numerous fronts isn’t always consistent. But every once in a while a real gem emerges, something that satisfies on so many levels – substantive, graphic, qualitative – a treasure that stands out among the shelves of roleplaying game books. Michael Prescott’s Trilemma Adventures Companion Volume I is one of these amazing gaming artifacts.

I first noticed Prescott’s work through some posts on the late, much-lamented Google Plus. That online venue was rife with wonderful, often free, resources for Old School Renaissance games (OSR) easily adaptable to most any fantasy roleplaying game. Prescott presented one- or two-page adventure locations centered around amazingly rendered, three-quarter view, cutaway maps with intricate architectural and interior detail. He initially offered these free at his Trilemma Adventures blog. After the emergence of Patreon as a means to support creators, he used this venue to engage with supporters for new ideas, linking further free releases for subscribers. These wonderful adventure locations piled up.

On their own these resources hit the right marks. Prescott’s adventures combine amazing artwork and original adventure elements. A gorgeous cutaway illustration-map in a clear yet detailed style serves as the centerpiece for each scenario. Text set around the map provides enough information guiding gamemasters in helping characters explore and interact with the various elements: a summary of the situation; room descriptions; inspirational tables with entries for encounters, artifacts, and aspects of the location and its inhabitants; and notes on adversaries, allies, magic items, and other setting components. Most run two pages, including the map, tables, and spot illustrations. They’re solid open-ended pieces with no narrative plot but plenty of opportunities for characters to decide the course of the action.

Prescott eventually amassed a collection of 48 of these adventures, all (still) available as free PDF downloads from his website. While some might remain satisfied stand to keep them as PDFs for reference or even print some for use at the game table, Prescott sought to collect them in a gaming artifact with amazing production values. He turned to Kickstarter to fund the project and garnered almost four times the amount of money he’d hoped to raise to publish the Trilemma Adventures Compendium. He not only compiled them in one volume, but included tips on using the book with one’s existing campaign, a comprehensive summary table of contents, a d1000 table of hooks and rumors that runs for 10 pages, endpaper, full-color campaign maps noting the locations of each adventure, a gazetteer for the campaign world, an index, an illustrated, system-neutral bestiary, and a PDF map pack (without tags) suitable for players. The Kickstarter reward levels kept things simple: primarily an all electronic PDF version and what was initially a print-on-demand volume. Stretch goals added some of those elements, but all focused on expanding and improving on the core book. The support proved so overwhelming he upgraded the final physical product to a 178-page hardcover, offset-printed book with glossy pages, linen-bound cover, foil title, a lie-flat sewn binding, and a bookmark ribbon. High production value, durable, an amazing gaming artifact to last the ages.

This inspirational resource reminds me somewhat of the utility of West End Games’ Instant Adventures for the d6 version of the Star Wars Roleplaying Game. Although these scenarios might serve as carefully plotted steps in an overall campaign, individually they provide a quick source of extraordinary one-session adventures ready at a moment’s notice. Gamemasters can skim the adventure location summaries for good ideas, then read only a few pages of text with a vivid graphic representation of the locale in preparation. A few random tables offer additional ideas to add depth to the action. 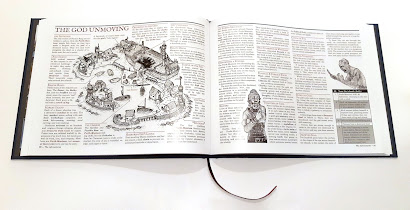 While the layout, graphics, and physical form are impressive, Prescott’s vision of a roleplaying world are anything but typical medieval fantasy. It embraces the exotic, otherworldly, and mysterious without indulging in over-the-top gonzo sci-fi-meets-fantasy. Just sampling the adventure titles from the table of contents offer a glimpse at the strange places to explore: “The Unmended Way,” “In the Care of Bones,” “Basilica of the Leper Messiah,” “Veil of the Once-Queen,” “The Man from Before.” Glancing at the maps one realizes most locations have a great deal of vertical depth; granted, some of this comes from their three-dimensional cutaway style, but they’re still far from a collection of flat-looking dungeon levels. The architecture and floor plans merge both Western and non-Western concepts with Prescott’s own imaginative embellishments and twists. His creatures avoid the simple fantasy game tropes of familiar monsters. Instead Prescott revels in exotically weird creatures, many of which maintain strong ties with their locations and, in some cases, the greater campaign world. The Compendium Kickstarter initially offered a system-neutral bestiary collecting the creatures featured in all the adventures; but as stretch goals Prescott offered separate PDFs with stats for various popular game systems, from Basic & Expert Dungeons & Dragons and 5th edition D&D to Dungeon World. (Some of these are now available for print-on-demand at DriveThruRPG.)

You can purchase Trilemma Adventures Companion Volume I in various forms from DriveThruRPG: $12 for the PDF and $39.95 for the PDF and premium hardcover, color book. Prescott also offers bestiaries for various game systems in both PDF and print-on-demand formats. Prescott still has some copies of the Kickstarter-produced, artifact-quality limited edition book available for $66 through the Trilemma Adventures store. Trilemma Adventures Companion Volume I earned two 2020 ENnie Awards, a silver for Best Adventure and gold for Best Cartography. Goodness knows it deserves accolades as an inspirational sourcebook, a visually sumptuous setting with plenty of locations providing rich opportunities for exploration and adventure.