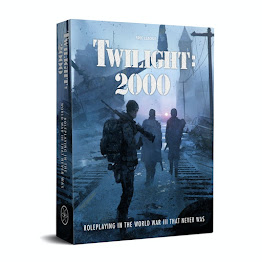 As I write this a spiffy new version of Game Designer’s Workshop’s Twilight 2000 dominates the latest roleplaying game buzz at Kickstarter. Who would have thought a game founded on situations from the late 20th century cold war would find a new audience in the 2020s? Free League Publishing, which did an amazing job on games like Tales from the Loop and the latest Aliens roleplaying game, has a slate of quality components in the game, many unlocked as stretch goals; so I’m on the fence whether to back a game I might not play but one that looks interesting to explore with lots of fun components. (The Kickstarter campaign ends Thursday, Sept. 3, 2020.) I’ve discussed my occasional interest on post-apocalyptic games before. I’ve often wanted to dabble in Twilight 2000 after seeing the ad campaign and subsequent articles/scenarios in GDW’s late, lamented Challenge Magazine. I’m not really excited about the game’s modern setting, but the survivalist theme with a hex-crawl campaign style appeals to me. Then I start thinking...what if I found a way to use the new Twilight 2000’s resources – character backgrounds, encounters, maps, adventure ideas, locations – but ported to a game system I like with a premise centered on an alternate-history end to World War II (a period that engages me more deeply)? Something like Twilight 1945. 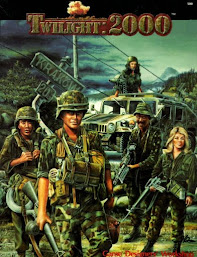 I never owned a copy of Twilight 2000, though I understood it used GDW’s house system. At the time (1984) I was immersed in Dungeons & Dragons and a host of other TSR games, as well as Traveller. Still, I couldn’t avoid the massive ad campaign in Dragon Magazine and later the support in GDW’s own house organ, Challenge Magazine. Twilight 2000 was often in the back of my general gaming consciousness. When the second edition released in 1990 I was consumed by my first job out of college, with West End Games’ Star Wars Roleplaying Game, Cyberpunk, and Space 1889 at the forefront of my gaming activities. I was also drifting from complex game systems to ones that didn’t emphasize game mechanics over characters and story. The few times I’ve looked over a first edition Twilight 2000 rulebook I’ll admit the graphic design and emphasis on equipment turned me off. Of course details of weapons, vehicles, and gear matter in a game centered on using every resource for survival, but I’m more for cinematic game play than number-crunching record-keeping. (For instance, I ported the Space 1889 system into D6 Star Wars, made easy with the former game’s attribute and skill structure.) 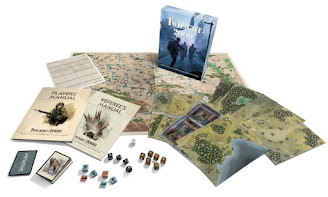 I expect part of my interest in the latest edition comes from a feeling of nostalgia at missing out on Twilight 2000 earlier in my life. I’ll admit I don’t want to miss out on a game that might really engage me; I didn’t back the Tales from the Loop game and, when I finally acquired it, realized I had missed out on some amazing production values, inspiring artwork, and some innovative game mechanics. Free League’s Twilight 2000 Kickstarter campaign offers a wealth of inspiration as well as high-production-value goodies. I’m interested in the game’s system (though I should refresh myself with the one used for the Tales from the Loop game), particularly a possible lifepath system for filling in a character’s past and a solo play mode. The game also includes other appealing elements: a double-sided campaign map, smaller modular map boards for tactical locations, tokens to use on those boards, an encounter deck, customized dice, and some adventure locations. (Alas, I’m not holding out for a programmed, solitaire tutorial adventure to introduce players to the game system and setting....)

And yet I hesitate because the post-apocalyptic, cold-war era setting isn’t really my cup of tea (aside from the price). I can certainly relate to the setting’s survival hex-crawl aspects of the campaign – it’s something I’m exploring with my slow development of the medieval Infinite Cathedral setting – but I’m not familiar with that period or its arsenal of weapons, gear, and vehicles (though I expect the rulebook to at least provide me with a meaningful orientation). But if I can adapt the components of this edition of Twilight 2000 to the World War II setting with which I’m more familiar, I might find a more engaging game experience (especially if the proposed solo rules work for me). The idea of Twilight 1945 appeals to me for all the reasons a Twilight 2000 might, with the added benefits of my greater familiarity with the source material, the opportunity to integrate pulp tropes into the action, and the option to liven up the setting with a host of period-appropriate trappings (Nazi zombies, super science, a secret Antarctic base or Alpen fortress, Cthulhu...).

A cursory search of the interwebzes soon demonstrated I’m certainly not the first to find the Twilight 1945 idea appealing. I found a forum entry where participants sought factual information on World War II weapons and vehicles they could convert into stats for the various editions of Twilight 2000. No doubt the possibility has come up in other fan communities for the game, though I haven’t seen anything beyond some queries, notes, and spreadsheets...nothing like a PDF concept game or anything. I doubt it’s anywhere near as popular as the original Twilight 2000 concept – a kind of niche within a niche – and I can’t think of anyone who’s developed the idea further officially or otherwise.

I probably don’t need a brand-new published game system to run a campaign like I envision Twilight 1945 – I’m more inclined to craft the setting first then use mechanics from OpenD6 or Risus: The Anything RPG, both systems I like for their relative simplicity and adaptability – but I’m really tempted to see how Free League interprets the setting with new innovations that can enhance any similar kind of campaign. I’m already so enthusiastic about exploring a post-apocalyptic alternate-history 1945 that I’ve begun drafting notes and ideas....

To set up a similar situation as Twilight 2000 I have to indulge in some alternate history. Numerous events occur on the global stage to plunge civilization into the survival state serving as the game’s default mode of play. Given Twilight 2000’s dependence on a limited nuclear exchange, I have to make some broad assumptions about the development of atomic weapons during World War II.... 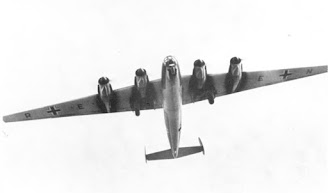 Throughout the war secret SS research stations improved on advancements made by civilian scientists, ultimately producing a small arsenal of atomic bombs. In March 1945 an increasingly desperate and deranged Hitler orders atomic strikes against Allied advances and distant Allied targets, Operation: Götterdämmerung. Ground detonations occur near key points along the Rhine River in the west and the Oder River in the east. A secret fleet of long-range strategic bombers drop payloads on Washington, D.C., New York City, New Jersey, Chicago, St. Louis, Norfolk, San Francisco, Los Angeles, and oil-producing facilities in Texas. Other bombers and V-2 rockets armed with atomic warheads hit European targets including Paris, Antwerp, Rome, London, Moscow, Leningrad, and Stalingrad (out of sheer spite). Using weapons from Germany, Japan bombs American forces on the embattled island of Iwo Jima and the fleet facilities at Pearl Harbor, Hawaii. With these attacks Germany coordinates a counter-offensive with its remaining military forces; although it doesn’t achieve any concrete objectives, it succeeds in fracturing Allied armies and sowing chaos along the eastern and western fronts.

In retaliation America, England, and the Soviet Union – having developed their own atomic weapons in secret – use conventional bombers to deliver payloads to key German-held areas: Berlin, Bremerhaven, Hamburg, Munich, the industrial Ruhr valley, the rocket research facility at Peenemünde, and the Norsk Hydro heavy water plant at Rjukan, Norway. America also launches strikes against targets in Japan, including Okinawa, Hiroshima, Nagasaki, Osaka, and Tokyo.

The atomic strikes kill most primary world leaders and legislative bodies. Remaining military personnel, usually in operational theaters far from national capitals, assume leadership roles with the expected severity of their martial backgrounds. But with civilization in turmoil, communications disrupted, and supply lines destroyed, World War II grinds to a halt. With no clear chain of command, lack of supplies, and uncertainty in the ranks, Allied and Axis units begin to fend for themselves, forging uneasy alliances to survive long enough to figure out what happened, who was in charge, and what they should do. 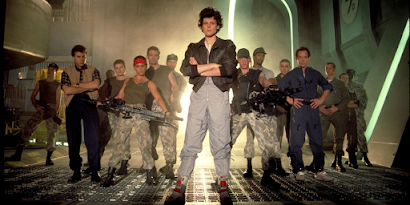 The characters come primarily from military backgrounds, mostly American and British. Others with their own motivations can join their band, though, assuming some plausible back stories. Just to demonstrate the diversity and story potential possible, I decided to take core characters from the Aliens movie and transpose them into a set-up. Obviously having female and African-American characters in this historical period offers some challenges, but I think my basic notes below integrates them nicely into a team trying to reach some semblance of civilization, if not actually getting home:

Lt. Gorman: Unsure and anxious commanding officer who does things by the book... except now there is no book. Thinks he’s the leader but obviously out of his league.

Sgt. Apone: African-American NCO from a supply and transport battalion, so he knows where to find stuff; still the highest-ranking NCO....

Carter Burke: OSS operative brought in right before the atomic strikes to meet with Ripley and evaluate/exploit Nazi experimental technology...at any cost.

Newt: Plucky orphan who attaches herself to Ripley, may or may not know about secret Nazi experiments.

I’m not sure I’d get or wait for the Kickstarter edition of Twilight 2000 for core rules and setting inspiration or simply forge ahead with my own rules preferences. Obviously I’d need plenty of layered encounter tables, considerations for radiation, hunger, disease, and weather, as well as a means of determining what survivors scavenge and how to track how long it lasts. Of course, if the Nazis made such alternate-history headway as developing long-range bombers and atomic devices, what other technology did they develop that might have a bearing on the game? Cloning exceptional leaders and core party officials? Atomic reactors for power generation? Unnatural life-prolonging medical procedures? Special planes and rockets? The means to establish a base in Antarctica? So I have plenty of potential to work with beyond the campaign’s basic survival and exploration themes. We’ll see if I’m impressed enough to back the Twilight 2000 Kickstarter; in the mean time I have plenty to think about in adjusting the campaign setting to my own Twilight 1945 ideas.