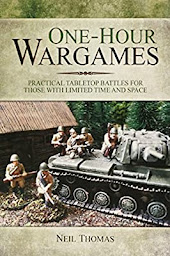 I’m always looking around for new games and rules, particularly ones that can put to use game materials I already have – in this case, miniatures – and ones I can adapt to introduce the adventure gaming hobby to newcomers and kids. My brother gave me a copy of Neil Thomas’ One-HourWargames for my birthday; I finally managed to read it and give it a try at the wargaming table. Thomas offers a very basic game system to which he explains and adapts numerous historical periods. He also presents 30 period-neutral scenarios useful for any wargamer seeking easy set-up with meaningful objectives. As simplistic as the system seemed, it proved just the right pace for a one-hour game with my young gamer son, adapted to one of his preferred non-historical genres, Star Wars.
I enjoyed Thomas’ Wargaming: An Introduction, in which he discusses various historical periods with rules for each one. It’s a slick volume with full-color photos and tons of information. Those rules are geared toward a more involved experience that lasts a few hours each game, with specifics for base sizes and numbers of figures per base, variations in unit weapons and armor, morale factors, and lists of armies and their specific qualities. It’s complex enough for a scenario to take several hours to fight but overall a far more immersive experience in the hobby. For those looking for a more streamlined yet quite satisfying wargaming experience, One-Hour Wargames lives up to the several key points touted on its back cover:

“Simple but effective rules for 8 historical periods from ancient to WW2.”

In contrast One-Hour Wargames keeps things short and sweet while still managing to provide rules and guidelines for engaging yet brief wargames. Thomas outlines each historical period in terms of the kinds of troops fielded in battle, grouping them into broad categories for simplicity, but noting their various tactics. Following each historical section comes a corresponding set of wargaming rules built on the same basic engine: about six “units” on each side; each player taking actions with all of his units each turn; units moving or shooting; rolling one six-sided die to determine the number of hits scored (modified by –2 or +2 based on the attacker’s characteristics); and units taking 15 hits each (halving hits for an attack if in cover or under other circumstances). The system seems extremely simplistic, but remain open to lots of modification. Certainly one might vary the movement and range distances listed. The –2 /+2 hit modification offers some flexibility for different units: poor/elite, special weaponry, circumstantial modifiers. Players could even find situations where an advantage/disadvantage mechanic might apply, rolling two d6 for an attack and taking the higher/lower roll depending on the circumstances. Keeping to cover makes a difference, as such units halve (rounded up) the number of hits inflicted on them. Of course the units described for each historical period add slight nuances to the game as well. Only some units can enter wooded areas or towns. Some units get an attack bonus, others a penalty. More complicated eras like World War II require a chart showing modifiers for different attacking units against certain targets.

Given the rules’ basic nature I shouldn’t have been surprised to find no rules for morale or leaders, though one might find some way to integrate them using existing mechanics (possibly an attack-roll bonus for an attached leader and testing morale by rolling less than the number of hits remaining on a unit on a d6...also modified by a leader’s presence). At first I felt tracking 15 hit points for each of six units on a side seemed a cumbersome bit of bookkeeping, but I easily solved that at the table by giving each unit a d20 (starting at 15) to note remaining strength.

These very basic rules seem easily adapted to different situations; one could even expand them within their current design rational to add greater depth to tabletop engagements. I’ve already thought of a few variations: enabling a line of infantry to move half distance and still fire; allowing one leader on each side which can reinforce a unit with a small combat bonus; and looking at implementing some kind of morale rules to force badly damaged units to retreat. (I’ve heard of online groups devoted to One-Hour Wargames with numerous variants for its systems, though I can probably add rules as needed while still keeping the experience to my overall level of simplicity and enjoyment.) The game remains easily adaptable for anyone with experience tinkering with wargame rules (pretty much anyone involved in the hobby).

“30 scenarios adaptable to all periods with clear victory conditions.”

While the one-hour game rules seem like the core highlight for the book, it also contains a solid resource for any wargamer: a chapter of 30 scenarios adaptable to any historical period. Each one contains a map showing the three-by-three playing surface, small enough to fight an engagement with the suggested six units per side in about an hour. Each one outlines the situation, the army sizes (usually six units each side), the deployment rules, notes on delayed reinforcements, special rules, and victory conditions. Notes also provide insight on the inspiration for each scenario – sometimes a historical battle, other times wargaming scenarios from other sources he’s modified (particularly Charles S. Grant) – plus “Further Reading” with sources on the history and game elements as needed. Each scenario keeps the action focused on the clear objectives and the play time (barring set-up) to the eponymous one hour.

Other, shorter chapters cover the practicalities of wargaming, playing solo games, running ongoing campaigns, a bibliography of “Background Reading,” and hobby resources (though geared for a British audience). 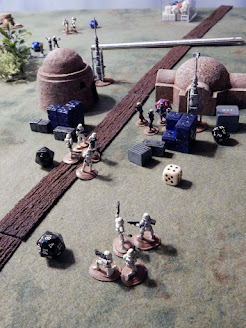 I decided to test One Hour Wargames on two fronts: how well it worked within the noted one-hour play time and how well I could adapt it to a different genre...in this case, science fiction. My son loves Star Wars (primarily Clone Wars), so I set up a classic battle between stormtroopers and Rebel troopers. I used my stock of painted 25mm miniatures and a host of suitable terrain. I chose “Scenario 14: Static Defense” since it used some interesting terrain and somewhat hobbled the defender, forcing him to keep two units near each of the two possible objectives (though the enemy only had to capture one). For the sci-fi aspect I increased the ranged attack distance from 12 inches to 18 inches. Most infantry units consisted of four figures, stretching my small stock of painted miniatures to their limit while still looking good on the battlefield. I deployed my Rebel trooper defenders appropriately, with all infantry squads and one heavy weapon squad (treated like a machine gun unit from WWII, with a +2 bonus to hits). My son simply lined up his six stormtrooper squads along his edge of the table. I held my ground, moving some of my rear-area troops around, while he pounded away at my units holding the town...including the heavy repeating blaster squad. He was smart to take that out first, then chipped away at my other defending units until he occupied the settlement. Mission accomplished: we both had fun, he quickly grasped the rules, and it worked to play out a game within an hour.

Overall I enjoyed One Hour Wargames and plan on keeping it as a good go-to for quick battles and scenario ideas. Sure, the system relies on basic mechanics, but it offers some capacity to easily modify it for particular periods, situations, and player ability. The 30 scenarios alone make the book a valuable resource, even if just using them to set up games with other systems. For 158 pages the $19.95 price tag is well worth paying to add this versatile wargaming resource to one’s gaming repertoire.