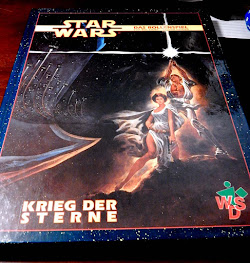 Back in the mid 1990s, when West End Games had the license to produce Star Wars: The Roleplaying Game, the company also had the rights to sub-license its game materials to foreign publishers. The arrangements included the usual approvals process – especially for any changes in layout, format, and artwork deviating significantly from West End’s versions – after which West End received several copies of the published product, some of which we forwarded to Lucasfilm for its archives. I’m sure a copy went into whatever file or library West End kept at the time. As one of the few if only people on staff who had any knowledge of the German language, I usually received a spare copy of German releases from the publisher Welt der Spiel; eventually I acquired some products in other languages, too. All these years later I still have most of these foreign-language editions. They’re more nostalgic novelties now, but they remind me of the amazing reach the game once enjoyed 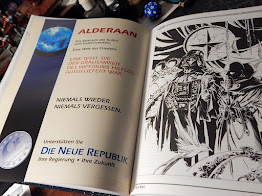 Some parts of my roleplaying game library I don’t give up, though I’ve tried culling it now and then. Material from West End Games remains one of those “untouchable” categories. The foreign-language products I still own demonstrate how different publishers reworked West End’s books to suit their own languages and markets. Most of my foreign materials are in German, since folks had at least some awareness of my German heritage, if not the knowledge I once spoke and read it with some minor degree of understanding. If I had to choose, I’d have to say the German release of the second edition of the rules is my favorite. Longtime readers know my preference for the first edition game (with second edition revised and expanded a close runner-up); but the German version of second edition boasts my favorite Star Wars movie poster illustration on its cover. It faithfully presents the interior content, complete with translations of the full-color, in-universe advertisements and all that edition’s great pen-and-ink artwork (even the “Darth and Ming” piece...). The next favorite in my collection is a slightly scuffed French copy of the full-color “Revised & Expanded” second edition (known among staffers as “Super Mondo”) to which I contributed a number of chapters. 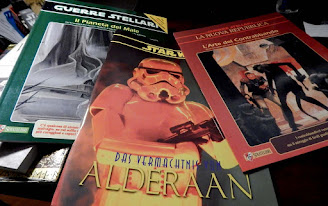 West End licensed foreign versions of the Star Wars Sourcebook and Imperial and Rebel Sourcebooks I helped revise for the second edition. Game adventures saw translations into German, French, Spanish, and Italian, including L’Arte del Contrabbando (The Politics of Contraband), Das Vermächtnis von Alderaan (Graveyard of Alderaan), and Il Pianeta del Male (Domain of Evil); you can have fun running the foreign titles through Google Translate to judge their interpretations. I believe most of the early boxed Star Wars wargames received some foreign translations, but the only one in my collection is Angriff auf Hoth (Assault on Hoth). 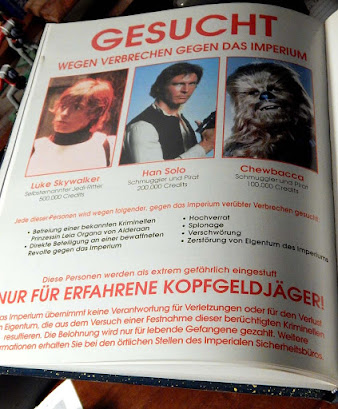 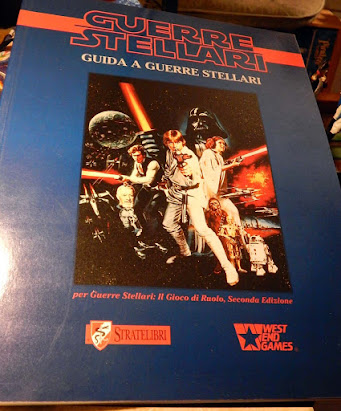 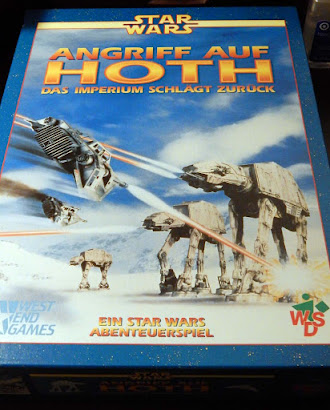 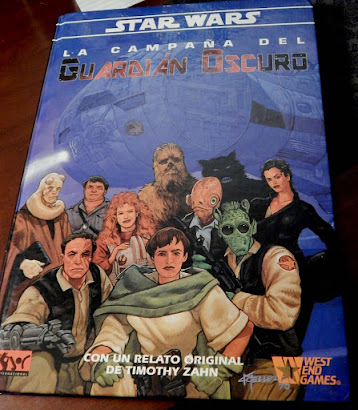 The Spanish-language version of the DarkStryder Campaign deviates the most from the original format, as producing a boxed set seemed problematic...so the publisher packed everything – poster diagrams, perforated cards, and all the individual booklets – into one hardcover volume with components tucked inside.

I’m not sure if many other West End game lines received licensed foreign-language translations. Even in the best of times the one game foreign companies really wanted was Star Wars; yet the only other one I recall in my collection is the German version of Paranoia with “Achtung! Satire!” prominently featured on the box (front and back, just so nobody would miss the point).

I have a few other foreign language editions of other games in my library. Some came to me from friends, but most arrived at my desk as comp copies nobody else wanted or trades and gifts from industry contacts. My German Dreamlands boxed set (Die Traumlande) includes the three core books for the Call of Cthulhu game as well as the boxed set components. The friendly folks who ran Iron Crown Enterprises licensed Middle-earth Role Playing books in German, too, including Die Festung auf der Wetterspitze and Die Gesetzlosen von Dor Rhunen. Somehow I acquired a thick, hard-cover copy of GURPS Universelles Rollenspielsystem. My misadventures even brought a German Stormbringer game adventure onto my shelves, Auf der Spur des Weissen Wolfes.

Of course I still have my original Das Schwarze Auge boxed sets from my family trip to Germany in the mid 1980s (which I’ve discussed before) as well as other early supplements my dad got me on a few business trips. It’s probably the only original foreign roleplaying game I own (though I’m not sure how many were ever developed and released back in the 1980s).

These foreign editions remain little more than novelty items now. I’m not sure what kind of success the Star Wars Roleplaying Game saw abroad, though it never seemed to constitute a large part of the company’s business. The staffer who took care of licensing arrangements with Lucasfilm also handled foreign sub-licenses – which made sense – though these were among his many other duties and distractions. I suppose the roleplaying game hobby survives as a niche market in other countries. Even with a similar percentage of gamers, the smaller populations mean a far smaller market; I’d expect much of that market these days to favor the latest iteration of Dungeons & Dragons. I’m still impressed at the international scope of both the renewed fascination with Star Wars in the mid-1990s and interest in the Star Wars Roleplaying Game at that time. My collection serves to remind me that once West End’s products reached across oceans...and I’m still flattered to hear how the game influenced people abroad, and how they still play it today.