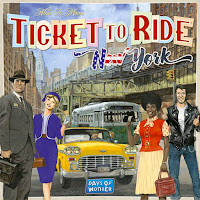 The board game world offers some amazing experiences, but the prospect of learning a booklet of new rules and spending several hours immersing themselves in an hours-long game can discourage some newcomers from pursuing the hobby...and even longtime gamers don’t always have the patience or time to invest in comprehending and playing a new game. As an advocate of introducing gaming to newcomers and kids, I’m always looking for games that don’t seem too overwhelming or complex, yet still offer a satisfying play experience. So I was happy to discover a few titles one might consider lighter, younger siblings of well-established games – Ticket to Ride: New York and Pandemic: Hot Zone – North America – which provide similar themes and gameplay as the originals without taking several hours to learn and play.

I usually enjoy trying new board games, but I’m sometimes overwhelmed by games with complex rules, numerous layers of procedural mechanics, multiple strategies to pursue, and lots of fiddly components. I recall two occasions where experienced players taught me games in that caught my interest but seemed overly complex: 7 Wonders and Terraforming Mars. I’d heard great accolades for both and figured I’d give them a try. Now I don’t mind spending hours at a time on gaming. Goodness knows any decent roleplaying game sessions takes a few hours. Miniature wargames can take some time, too, especially with set-up and break-down. There’s always Axis & Allies and Diplomacy, titles infamous in the amount of time they can consume for a full game. But learning a new game of the magnitude of 7 Wonders and Terraforming Mars seemed nearly overwhelming for me. Game set-up took some time, sorting out pieces and cards and tiles and such. Explaining rules took a bit, too, though I’d expected that. But playing out the game – all while puzzling over implementing any degree of even a remotely winning strategy – took several hours of intricate turn sequences in which the frustration of figuring things out and trying to win was only occasionally punctuated by some satisfying in-game achievement. I understand, as a beginner, learning and playing a new game is going to take more time and effort. They weren’t bad games, they just didn’t seem right for me, especially with the level of complexity and investment of time for a complete game.

So I was glad to find some versions of popular games in more manageable packages. Not exactly 7 Wonders and Terraforming Mars, but variations on games I own I can pull out when I want something to introduce to newcomers or just play for a quick yet satisfying night’s gaming in under an hour. Ticket to Ride: New York and Pandemic: Hot Zone – North America fit the bill of less than an hour, with estimated play times of 10–15 minutes and 30 minutes respectively. Both use similar mechanics as their original counterparts, but with a smaller scale. 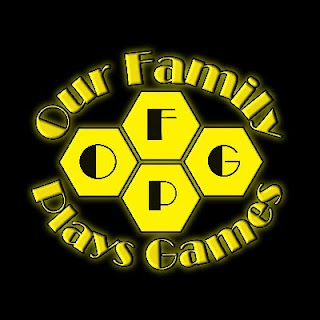 When it first released I dismissed Ticket to Ride: New York from Days of Wonder. Why did I need it if I had the full version of Ticket to Ride (in addition to Ticket to Ride: Europe and Ticket to Ride: First Journey, which my son has yet to play). Two things sold me on this game. The friendly folks at Our Family Plays Games (OFPG) had an episode dedicated to the game – the first episode I watched after my friend Wayne brought OFPG to my attention – and its associated title, Ticket to Ride: London (“Episode 17: Small Box Ticket to Ride Games”). Their enthusiasm for the game, especially as veteran game players, encouraged me to take a second look. It also helped that our local Target store – which has broadened its line of family and strategy board games over the years – had put a pile of Ticket to Ride New York on clearance at half price ($9.98). At that point buying it was a no-brainer. 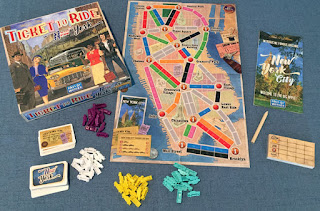 Ticket to Ride: New York uses similar mechanics as its namesake: players draw cards, collecting and using them to claim colored routes on the map between points of interest. Instead of trains to mark routes it uses New York’s infamously iconic taxis. Cards for claiming routes are clearly marked by color, symbol, and a mass transit bus or subway car (and the multicolored taxi card as the wildcard to substitute when claiming routes). The map board shows Manhattan and nuerous neighborhoods and landmarks connected by potential routes. The routes limit themselves to Manhattan island (with a jaunt to Brooklyn) instead of the longer routes across North America like the main game. Unlike Ticket to Ride, most routes consist of two or three spaces, with a handful of single-spaced routes and one of four spaces; more common routes have double tracks so two different players can claim them. Players score for routes claimed, charting routes on their secret Destination Ticket cards, and scoring an extra point for each Tourist Attraction connected to any of their routes. Certainly the shorter routes and the possibility of gaining points for connecting tourist attractions feeds a more immediate gratification scheme for players; the parent game rewards strategies that require patience and persistence which really doesn’t start coalescing until well into the game. While it’s great as a “gateway game” for newcomers it’s also suitable for experienced gamers looking for a quick yet competitively satisfying experience...a plus when bringing both new and experience players to the table.

While I was grabbing my clearance copy of Ticket to Ride: New York at Target I passed an end-cap display featuring a host of new board games to tempt my wallet. While I was able to resist the new PanAm and Godzilla: Tokyo Clash games (for now...), I couldn’t help but pick up the latest release in the Pandemic game line, Pandemic: Hot Zone – North America. I’d heard about it earlier in the summer when Z-Man Games released a print-and-play version as well as solitaire rules for it (as well as the regular Pandemic) to encourage people to stay home and play games lest they inadvertently help spread the actual pandemic. While I’m generally thrifty and like print-and-lay games, for $19.95 I couldn’t pass it up, especially with the possibility of solo play. 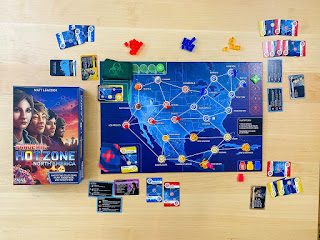 Pandemic: Hot Zone – North America condenses gameplay to just one continent instead of the entire world, using similar yet scaled-down mechanics as the original. The limited scope helps keep the rules manageable, even though, compared to Ticket to Ride, the nuances of the cooperative play, numerous phases each turn, and the escalating threat level may seem more complex to some. I’ll admit the solo play option – almost a default, with adjustments, to any cooperative game – combined with the shorter game time (30 minutes) makes this extremely appealing...and, of course, topical, given our current wallowing in America’s hellscape response to the covid-19 pandemic. Pandemic: Hot Zone – North America still includes the usual components and rules from Pandemic, but in slightly lower quantities and, of course, with a board with fewer locations and virus transmission lines...meaning fewer elements for new players to meaningfully comprehend. The shorter play time lets folks learn quickly and then return for subsequent games to apply what they’ve learned from past play experiences.

I’m not sure how to categorize these games in relation to their original versions. What do you call games like these, with similar mechanics and experiences as their parent game but not so grand in scope or depth that they take several hours to play? They’re not quite “light” versions, just pared down a bit. Are they “sampler” games because they offer a satisfying morsel of game experience, just like the full course, without the time or complexity commitment? Starla and Mik at Our Family Plays Games call these “small box” editions. On their own they serve as compact versions providing similar mechanics and experiences as their parent game but without the magnitude or investment that takes several hours to play.

This all makes me wistful that a similar “small box” package doesn’t (and possibly can’t) exist for roleplaying games. Many have tried; I’m not sure any have really succeeded. Certainly those catering to games for kids have come close – I’m thinking of Hero Kids and No Thank You, Evil – but roleplaying games remain far more complex experiences than one might meaningfully distill into a compact game with a relatively short play time. Unlike board games, which rely on core rules with little interpretation, roleplaying games depend on the gamemaster’s presentation as well as interpretation of character actions in relation to rules and situations...often far too subjective compared to even the more complex board game rules. Goodness knows I’ve looked at introductory roleplaying game experiences through the years; creating a good one that imparts a positive player impression is challenging enough, but doing so clearly in a condensed “small box” version (of a “parent” work or an original game) remains difficult.