Several times during my five years working at West End Games I received an early morning phone call of the utmost importance. Since I had to supplement my meager salary with tons of freelance work (like most of the editorial and graphic design staffers) I was usually up early, anyway, to work in an hour’s writing before getting an early start at the office. So the phone call wasn’t waking me up or anything, but it required me to leave even earlier. Usually the caller was production manager Rich Hawran, though sometimes owner Scott Palter himself. They needed me to perform an extremely urgent task before coming in to work: buy doughnuts.

I’ve always managed to live close enough to my workplace for a short, reasonable commute. When I started at West End a fellow staffer helped find me a reasonably priced place in Honesdale. I had the unfortunate luck to move into a second-story apartment on one of the main roads into town...right next to Mister Donut. This was not ideal, but for the price and location – within walking distance of town, 20 minutes driving north to get to the office – it worked. While traffic on Route 6 usually quieted down at night, trucks engine-breaking down the nearby hill occasionally woke me up at night. Sometimes a tractor trailer pulled into Mister Donut next door with its engine idling, making for a rough night’s sleep. And then there were the morning phone calls – maybe once or twice a year – with requests to buy doughnuts for the office. 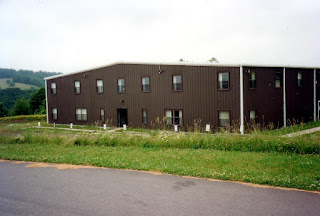 Rich or Scott called to let me know we were having a meeting (inevitably at Scott’s insistence) and needed several dozen doughnuts. If Rich called Scott usually raised his voice in the background to increase the suggested number by at least a dozen. Scott in particular reminded me to get a receipt and put in for reimbursement from petty cash (he was quite aware how little we earned and how cash-strapped we always were). So I’d grab everything I needed for work, load up the car, and walk over to Mister Donut to order the requisite multiple-dozen doughnuts before driving through town, north on Route 191, to the nondescript brown warehouse in a field where West End had its offices. I suppose I was convenient: I lived right next to Mister Donut and had, by well-known habit, the reputation of being awake and ready for work at an early hour...early enough to get doughnuts before everyone arrived at work for the meeting.

The request was just as upsetting for the implications of a doughnut-worthy meeting. Staffers generally dreaded meetings with the owner of the company. It was bad enough to hear “Scott wants to see you in his office.” May be something good, probably something bad. Having Scott call a meeting or even hearing him ponderously make his way upstairs was a portent of doom for everyone...and if he was buying doughnuts, it was meant to soften some sort of blow. At the very least such meetings took people away from urgent work trying to make deadlines; sometimes they saddled editors with additional work, drove projects off into unexpected territory, or completely disrupted the fragile balance of personalities, projects, and politics that dominated the creative staff. In a past memorial I mention Scott Palter was not an easy master to serve, but he gave many people opportunities in the game industry and, despite his many often annoying eccentricities, was a decent fellow overall.

At times Honesdale seemed like an isolated backwater in some lost valley between “The Mountain,” over which one had to travel to get to any semblance of civilization. At least from the perspective of eating out the town offered enough variety beyond doughnuts to satisfy game designers busy with office work and constant freelance writing (though escaping its confines for other pursuits certainly helped alleviate the tedium).

With the warehouse office in the middle of nowhere, lunchtime options required a drive into town and back. I usually packed my lunch from home, but occasionally staffers ventured out to try squeezing lunch at a restaurant into the meticulously monitored lunch hour (a constant point of contention with shoe company management that exercised authority over the game minions). Most casual-dining sit-down restaurants compounded the problem with amazing leisurely service, as if we had the entire afternoon to enjoy our meal. 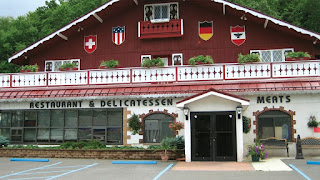 A Google Maps search today reveals some of my favorite restaurants still remain, though others seem to have disappeared (along with the arcade and drive-in movie theater which occasionally helped relieve stress). Elegante Restaurant & Pizzeria on Main Street was the typical local Italian restaurant (though the local Pizza Hut provided franchise comfort food in a pinch); the pizzas were good as were the enormous stromboli. Tubby’s Heros seemed like a little hole-in-the-wall shack on Main Street but always had a line out the door for its affordably priced, freshly made subs; I recall a few times getting a sandwich, soda, and chips and walking over to the courthouse park for an al fresco lunch on warm-weather weekends. The diner on Main Street also remains, possibly under a newer name and management than when I lived there; alas, I’m not really a diner person, and only ate there a few times (and the food was good as diner food goes, as I recall). The Alpine Wurst & Meat House looked the part, with architecture evoking a Swiss chalet; yet despite my German heritage I ate there only once or twice (the prices were a bit beyond my means at the time), once with a visiting freelancer who wanted to treat me to dinner out and perhaps once with Scott Palter himself to commemorate some occasion I can’t accurately recall.

And what happened to that next-door Mister Donut location? I vaguely recall it transitioned to a different doughnut franchise my last year in Honesdale; no doubt it underwent several iterations before recently becoming what looks like a local premium coffee shop with two locations in town. Alas, it doesn’t look like it serves doughnuts anymore.