Published adventures very rarely stand out as both entertaining fare to bring to the game table and paragons demonstrating design philosophy. One might argue the dungeon-delving paradigm embodied in B2 The Keep on the Borderlands accomplishes this. Certainly most of the adventures in Michael Prescott’s Trilemma Adventures (which I featured earlier) vividly present settings and situations characters can explore and with which they can freely interact. S. John Ross demonstrates his high-trust ideals in his latest adventure, Slimes in Blossom Grove. Intended for his Risus: The Anything RPG and his Uresia: Grave of Heaven world, it’s easily ported to any fantasy roleplaying game and setting. It demonstrates in written form elements to encourage high-trust gaming at the table regardless of system or setting and serves as an example of imbuing high-trust ideas into published adventures.

The premise seems simple, but it’s rife with layers of conflict and puzzles for the characters to play with. Two Slime families gathering for an impending wedding have overrun a cozy, rural town, stressing out the inhabitants and their resources (and patience). Ross provides a host of elements gamemasters and characters can play with in the context of this broad situation. The officiating Slime priest and the Slime groom have gone missing. The Slime bride seems openly against the wedding and has a mischievous twin sister. Rumors abound that a band of brigands lurks nearby. And there’s that problem of all these Slimes hanging around eating and drinking everything and oozing their way into everything else, much to the chagrin of the patient but weary villagers.

Intelligent, gelatinous Slimes are one of the hallmark fantasy races in Ross’ Uresia setting; one might substitute them with other, more mainstream fantasy races to fit better into an existing campaign, but the Slimes themselves offer a distinctive seasoning to the adventure. The Slime children get into all kinds of trouble (especially the Magma Slimes). They speak in funny noises (with appropriately humorous coaching from Ross). Non-Slimes have a difficult time telling individual Slimes apart (a central point of one of the conflicts). And ultimately the reason so many Slimes have gathered in Blossom Grove – related to but not quite actually the wedding – remains a foundational Slime issue. So while I think converting the Slimes into some not-quite-equally entertaining fantasy race could work (halfings, pixies, or brownies, perhaps?), I feel it’s more reasonable to find a reason to introduce Slimes into your existing campaign setting. They’re just too much fun. (And for anyone who’s ever heard, read, or talked with Ross about high trust and tactical infinity, they’re foundational concepts ultimately in the service of everyone having fun.) 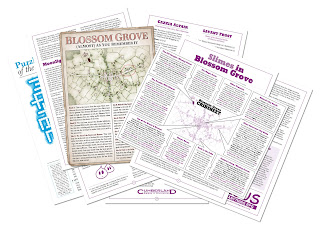 Ross presents all these pieces in an easily digestible format gamemasters can read and prepare so they’re armed with a full range of storytelling elements characters can play with at the table. He starts with an encounter in media res just before the characters reach the town...with Magama Slime children chasing each other through a now-burning field. He provides resources for players, notably a slew of pre-generated characters that fit right into the playful spirit of Risus, and Uresia. A full-page handout includes a half -page map with a key of “Blossom Grove (Almost) as You Remember It” to orient players to their characters’ knowledge of the town and serve as in-game reference if necessary. Like many adventures, this provides several key locations characters can explore; here they find non-player characters and events that help them figure out what’s going on, what conflicts confront Blossom Grove, and how they might interact with the situation. A page discusses how all these elements might interact through character and gamemaster involvement at the game table. These serve as encouraging suggestions and hints on how all this might come together, especially as non-player characters react to various changes in the situation...all without steering the characters to a set of predetermined actions intended to resolve the adventure. Perhaps the most useful item for gamemasters is the “Blossom Grove Cribsheet,” featuring a small map of the town with call-outs leading to other notes about what characters might find at key locations and the essential non-player characters with their actions and motivations. In this regard Ross provides a host of ingredients, with some hints as to how they might work together, but with no pre-determined final entree...er, resolution. That, according to his high-trust philosophy, is completely in the hands of the characters, who explore and play with these ingredients as presented by the gamemaster. It’s combining literary elements like character, setting, and situational challenges, except without a pre-mapped linear escalation of scripted events toward a climax. Ross trusts gamemasters to throw everything into the pot, let the characters stir it up, and enjoy what finally makes it onto your plate.

Way back when I was working at West End Games a story passed around that, when the company was developing the TORG roleplaying game, they joked that they needed to put a miniature version of the game designer in every box to personally help gamers understand the game system and setting. Reading Slimes in Blossom Grove is the closest I’ve seen anyone getting to imbuing game text with their playful yet insightful personality, all while clearly rendering an entertaining, open-ended adventure. I say “open-ended” here as a crutch; what Ross really demonstrates here is how to present a “high-trust” adventure.

Slimes in Blossom Grove serves as a solid example of an adventure that presents printed information in a manner that encourages gamemasters to bring high-trust play to the table. High-trust gaming primarily emerges in the relationship between the gamemaster, players, rules, and adventure during play. Participants place their trust in each other to navigate an unfolding story in character rather than trusting specific rules from the player perspective to achieve a technical victory over adventure goals. It’s a confluence of good player-gamemaster relationships in the context of the setting and rules used. But written game rules, settings, and – perhaps most importantly – adventures can also encourage high-trust play by demonstrating that players don’t need to look to the rules and mechanics for solutions, that their characters should rely on their own qualities interacting with elements from the setting situation. Good ones avoid predisposing gamemasters and players to a limited set of solutions (or even just one solution that propels the action to the next scripted scene), leaning toward “tactical infinity” (another subject about which Ross is passionate) which revels in the “anything can be attempted” aspect of roleplaying games. (In this no-doubt imperfect interpretation of Ross’ numerous missives on the subject I’m trying to articulate my own meager understanding of the higher concept.)

Slimes in Blossom Grove uses several techniques to imbue high-trust concepts in presentation and adventure design. It provides all the elements with which the gamemaster and characters can play. No scenes of predetermined events with prescribed solutions leading to subsequent, escalating scenes, just the literary elements – locations, allies, adversaries, conflicts – to weave an enjoyable story on the fly, with the players’ characters in control. Non-player characters have clear motivations and goals tightly related to the situation at hand. It emphasizes exploration, interaction, and problem solving. No programmed “if/then” statements governing non-player character actions, no requirements that the characters “must” meet some goal or take a certain course of action to force the narrative toward the climax. Just the ingredients gamers can mix together with their characters to provide a fun-filled game session.

Ross provides guidance for this approach carefully disguised as an anecdote on the adventure’s last page where he opines on various issues about Slimes in Blossom Grove, including its inception. He and a friend spent some time talking through ideas on high-trust adventure design: “adventures meant to be solved in personal, creative ways by the Player Characters.” At its heart was determining the core problem, developing elements of that problem (and tossing some that didn’t seem to work), and outlining the non-player characters and events evolving from it and with which the player characters might attain some resolution (note: not determining precise solutions, but offering plenty of tools to explore and deal with the problem). Problem-solving remains the core key to all this; and while it includes necessary literary elements like conflict, character, and setting, the exact plot, with its key encounters escalating to a climax, remains open for gamemasters and player-characters to explore around the game table.

Anyone following Ross on Twitter (the latest social media platform he tolerates) has read occasional missives about these high-concept game design topics...and probably noted his frustration that more folks don’t understand and live by them. I’ve known him a long time. I’ve followed various blog entries and missives about his high-order game design and play ideas, among his many notable concepts like tactical infinity and high trust gaming. A few years ago we even corresponded about such topics, though I fear I disappointed in my inability to both fully grok them and develop them outside the box. To those seeking to learn more I commend Ross’ many online missives on such subjects posted at his blog, Rolltop Indigo (though following his brief Twitter posts offers opportunities, too). Don’t bother searching for the term “high trust.” You have to wander through the wilderness for a while, reading, carefully digesting, and ultimately spending time contemplating Ross’ discourses, preferably with some practical exercises applied to your own gaming efforts. I highly recommend starting with “An RPG Lexicon” from whence you can follow links to various other articles about high-trust gaming and design, tactical infinity, and a host of other subjects to challenge you and improve your game experience.

Slimes in Blossom Grove is available as a free 14-page PDF from DriveThruRPG; if you enjoy it consider leaving a positive comment to encourage Ross to produce more amazing high-trust adventures. While you’re there check out the rest of his offerings (many of which are free), especially Risus: The Anything RPG and essential reading for any gamemaster, The Big List of RPG Plots.