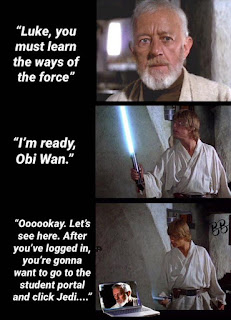 I’ve long been an advocate of introducing the adventure gaming hobby to kids and newcomers. I feel strongly that games can enrich our lives beyond their basic entertainment value. For a while I’ve hoped to engage with kids and educators about enhancing learning, reinforcing lessons, and encouraging a sense of curiosity through games. I’ve tried a few times to create games suitable for younger players: Panzer Kids, Valley of the Ape, even the solitaire Lord of the Two Lands. So when I realized my son needed help with his multiplication tables, I started thinking how I might turn a learning experience into a game. (I hated multiplication tables when I was in elementary school and it started a lifelong dislike of math.) But when the pandemic hit everything was canceled during America’s subsequent hellscape response. Including school. So my son’s teacher never had a chance to solidify his multiplication and math skills, teach much about Virginia in the American Civil War, or cover the solar system so kids could do the obligatory project for the canceled science fair. With the new year starting we’re facing more than challenges from full-time distance learning online...we’re dealing with having lost an entire quarter of his previous year’s learning, further diluted with a tedious summer without many of the usual summertime diversions. So I designed a game to help with math. 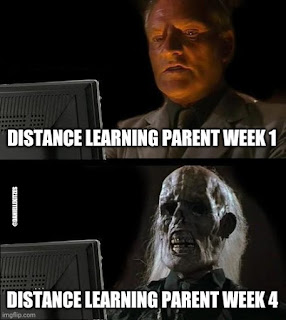 As a parent I’ve wanted to help my child as much as possible with schoolwork. It’s not always welcome, especially when overwhelming homework and other assignments – in the slavish service of hitting the marks on standardized tests – foster a sense of resentment toward any learning activity beyond official school assignments. Kids often resist anything pulling them away from their precious free time. Yet I try. I’ve seen “math dice” in stores and they failed to impress me. I bought a math game from the local teacher store once with triangular cards, where one covered up one corner with the multiplication answer so the student had to multiply the factors in the remaining two corners. I’ve seen workbooks with seemingly engaging themes...though they were still workbooks. We’ve encouraged him to watch the Schoolhouse Rock Multiplication Rock videos; I even burned him a CD copy of the original Multiplication Rock record that helped me through math at his age. After a lazy summer we returned to school with a new teacher who maintains firm expectations and intends to soldier on through the new academic material regardless of Covid and distance learning limitations. We needed some engaging activity that could help bolster his math skills.

I’ve had the math-based movement mechanics for a race game in mind for a few months now but needed an easily implemented yet engaging theme. Since my son loves cats, I thought of a world-spanning game where super-cats raced to save other cats from various situations around the globe. My main obstacle was finding or creating a world map large enough for a suitable board; like so many things, I allowed this obstacle to hinder me in pursuit of this project. But now with the urgency to shore up his multiplication skills, I stumbled upon another, easier-to-implement theme: a space race.

Way back in April – or was it March...time has ceased having any meaning at this point – his class was supposed to study the solar system. The unit was to lead to the inevitable science fair where students made the obligatory displays showing the solar system and relaying information about the planets. Of course by that point in America’s hellscape response to the pandemic our state governor – a physician himself who saw the need for a reality based response – canceled school for a few weeks, followed shortly by a cancellation of the rest of the school year (amounting to my son’s final quarter of fourth grade). I was already gearing up to inspire and help him with this project, but, like so many things, that fell along the wayside. Until now. I combined an engaging theme (a race through the solar system) with the concept for an easy-to-make board. Merging this with my math-problem-based movement rules resulted in the Sol O.P. Grand Prix game. 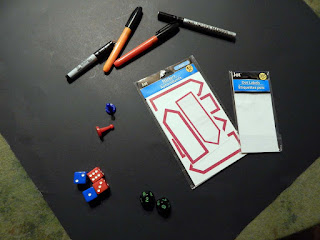 Thanks to the magic of the interwebzes I discovered a website with a calculation form to translate the actual planetary diameters and distances from the sun into whatever scale you want (in imperial and metric units) for your obligatory solar system science project. I’d initially envisioned a race course hitting all the planets, but scaling these values showed me the inner planets all crammed into a corner of my black oak-tag poster board. Hence the “O.P.” in the title: it stands for “Outer Planets” (a nod to The Expanse novels and show, which I love). A trip to the local Dollar Tree provided useful components for the board: notably the aforementioned black oak-tag poster board, a slew of half-inch round white stickers, and some red-rimmed arrow stickers. My stash of game components at home furnished the pawns, dice, and markers. The board looks very much like a solar system science poster, with planets and orbits marked on it. Using a silver marker on the black oak-tag I plotted a winding course from Ceres in the asteroid belt (start and finish point for the race) in a wandering circuit linking all the planets (yes, even Pluto, Neil DeGrasse Tyson). I stuck the white circle stickers every half-inch or so along this silver line, spaces on the map by which players could measure their progress in the meandering space race. With movement values ranging from 1 to 12 I needed plenty of space between planets where players could move rather than painfully short direct routes. I could have made each planet square display relevant information, but the name, symbol, and a dot (representing its relative size...some were simple pin pricks) looked good enough. 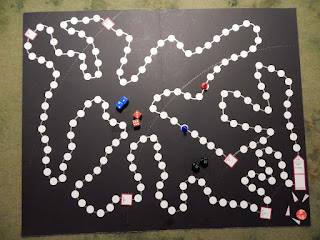 Now I could combine my movement rules with the board and my race course plotted out. To move along the track a player rolls two dice: preferably d12s, but two pairs of similarly colored d6s could work, too. This generates two factors the player must multiply to announce the correct product. If successful they move their pawn along the track a number of spaces equal to either number shown on the dice or their difference. If they answer the multiplication problem incorrectly, they move back along the track a number of spaces equal to the highest number on the dice. They must land on each planet space by exact count – though they can overshoot and go back (and forth, and back and forth) until they land on the planet – before proceeding to the next planet. I threw in rules for landing on another player’s piece (that player goes back a number of spaces of one value on the dice, chosen by the moving player). The first racer to reach Ceres again wins. (I also devised similar movement rules for using addition instead of multiplication, for younger players.)

It’s a very basic race game that combines that obligatory solar system project with game rules reinforcing multiplication skills. At first I was worried it didn’t include too much room for player choice; but requiring players to land on planets by exact count (or allowing them to land on other player’s spaces) provides a reason to consider using other numbers in the equation besides the highest.

A quick playtest of the game with its intended audience proved my point and illustrated where clarification was needed (notably that the difference of two same numbers, say results of 8 and 8, is 0, and hence a player can choose to move 8 spaces or no spaces at all, a boon, sometimes, when approaching or possibly overshooting a planet). It didn’t take long to explain and play – maybe 30 minutes, tops – far less time than I spent working on the board. Along the way my son got a few multiplication answers wrong, so we talked about some strategies to remember the product of certain multipliers, particularly his nines and twelves (which still perplex me). We never landed on each other’s space to send someone back, though I’d expect that to happen in games with three or more players.

Hopefully we’ll get a chance to play it a few more times to solidify his knowledge and confidence in his multiplication tables. I’ve already drafted and revised the rules in as clear a fashion as possible (unlike this rambling blog entry), posting them over at the Griffon Publishing Studio website (and here) so folks can point to it, download the rules, and make their own game boards to reinforce the math skills they learn in school...in whatever form that takes this year.