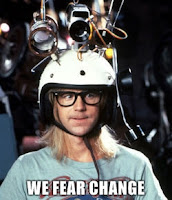 As a member of Generation X who fears change, I feel torn between two worlds. I am reluctantly adapting to the exponential technological advancements of 21st century society despite my preference (possibly nostalgia) for the seemingly better days of my youth. It’s not easy for an old curmudgeon like me ensconced in my old ways. It’s not that I haven’t tried. Long an advocate of print publishing, I adapted to release game product in PDF format and even succumbed to sharing my written thoughts on game matters online in this very blog. Even so, I still prefer to read print books, for my eyes and attention span have limited tolerance for reading text on a screen with any lasting sense of comprehension. The pandemic has forced everyone to adjust, often with the aid of electronic devices and various apps and programs. And I’ve tried to adapt, too, but I find tabletop gaming online doesn’t offer the same experience, the same satisfaction, of gaming in person.

Certainly electronic platforms enabled people to manage during the oft-isolating precautions conscientious and compassionate members of society have practiced during the pandemic, through two years of waves and variants. Zoom and Skype have allowed many to work with colleagues when they can’t meet in person. Teleworking over the internet enabled many people to stay employed in white-collar careers, though those working essential, in-person jobs couldn’t take advantage of that benefit. The internet helped families (including ours) stay in touch when visiting friends and relatives isn’t feasible. Various platforms help us order groceries, meals, and other goods for home delivery or relatively safe curbside pick-up. It definitely gave us options – in the first year of the pandemic, at least – for attending school online in “distance learning;” not an ideal learning option, but the safest format in a period of virological uncertainty. On more than one occasion I’ve contemplated how difficult surviving pandemic isolation would have been had this happened 20 or 40 years ago, before the ubiquitous nature of the internet interconnected many aspects of everyone’s lives.

Even before the pandemic, though, I’d tried online gaming of sorts. As a wargamer I’d looked in to Vassal, but never really did more than dabble with it in an attempt to learn the fiddly interfaces for the few games I wanted to play. Back in the Google Plus days I ran a Pulp Egypt D6 adventure for an online convention. I joined a few roleplaying games on the Roll20 platform. Overcoming the initial learning curve required for basic interface with the technology took some work. I’m sure more time there might have enabled me to use various bells and whistles for more fulfilling experiences. The online convention game was a one-shot, both Roll20 games were intended as campaigns but, like many efforts, didn’t get too far. Despite the electronic platform we used, typical in-person ills still plagued these games: people had trouble coordinating schedules; players still pursued their own agendas counter to the overall plot or group objectives; temptations at home distracted players..

In the mean time my in-person gaming continued, based primarily around a few wargaming conventions, hosting folks for weekend afternoons of board gaming, and occasional games with my family. Then the pandemic hit, which sidelined many of these activities, especially my efforts to host a wargaming lecture and subsequent game days at the local history museum. We still gamed as a family, but my gaming beyond that remained seriously lacking. Most of our time focused on staying safe, managing the changes brought about by pandemic precautions, and adapting to new mindsets, both ours and those of our less civic-minded citizens. 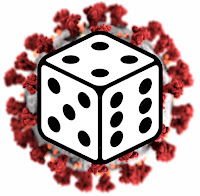 A few months into the covid pandemic a friend encouraged me to sign up with Board Game Arena to join him and find others to play my favorite games. I gave it a try with the suggested demo game and, while mildly amusing, didn’t really click with me. Each game required learning its own interface beyond comprehending the rules, turn sequences, and strategies. When confronted with this same conundrum noted game scholar Professor Scott Nicholson – famous for his “Board Games with Scott” videos and Everyone Plays at the Library – described playing games online as trying to manipulate board game components using spatulas instead of your hands. Is it possible? Yes. Is it practical and fun? Probably not.

I was also somewhat dismayed to learn games occurred at the players’ own pace, not necessarily in real-time as one would in the dedicated experience of gathering around a table solely for the purpose of playing a game. My friend noted he was in several games running simultaneously; games on this platform, being turn-based, indicated to players when their turn came about and required their input, then moved onto the next player. Meaning games could stretch on all day, or even for several days, as participants checked their devices and took their time formulating moves before moving on to the next player. Not exactly the focused, immersive experience we get gathered around the table in person.

I found it quite sadly symptomatic of our current cell-phone society where we’re easily distracted by electronic bits injected to our devices: newsfeeds, texts, games, and posts from friends, family, and strangers about things that might mildly interest us. Worse yet, doodling with one’s cell phone has become the default behavior even in situations where we really should be otherwise engaged, especially when sharing experiences with each other in person. Like tabletop games.

Nonetheless I still persisted in one area, perhaps my greatest disappointment of many during two years of pandemic privations: hosting strategy games for the local museum. It went on hold for a year, then, in the spring of 2021, when hope emerged the pandemic might abate, I gave an in-person lecture on wargaming history at the museum (masked, of course), followed a few weeks later with an in-person, masked American Civil War ironclads game using Bob Cordery’s Gridded Naval Wargames rules. Alas, the delta variant soon ran rampant through the population, followed by the omicron variant. It looked like in-person museum programs would have to wait once again. 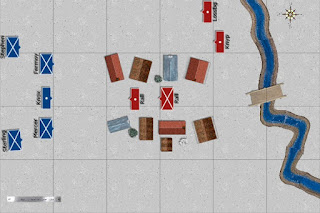 Like other museums around the world, the local museum adapted its lecture series to online venues: live “webinars” on various platforms, some recorded for later access. But the interactive nature of strategy wargaming posed challenges. It required not simply a means of communicating a lecture with a question-and-answer session, but some way of displaying the battlefield normally depicted by models on a tabletop. And the platform had to remain accessible to most participants, without necessarily having to download a specific wargaming app (and, more importantly, without requiring me to find one and learn all it’s technical nuances). I remembered I’d downloaded a program ages ago called Battle Chronicler, meant for creating maps for after-action reports on wargames. I fiddled with it and realized it could serve – in a “shared screen” capacity – as an electronic tabletop depicting the battlefield and the disposition of units. We tried it in a Zoom meeting and it seemed to work. Although a recent online strategy gaming program garnered only a few players, the interface seemed to work, with people giving me orders for their units which I moved around the battlefield. I’ll freely admit I need more experience with it to better utilize its many tools; but it’s a start in enabling online historical games to promote the museum’s mission.

So how have I fared – eschewing online tabletop games for the most part – during the pandemic? Our family has tried playing games on a somewhat regular basis, mitigated by my son’s intense devotion to Robox. I’ve engaged in numerous solitaire gaming experiences, from board and war games to roleplaying games. I’ll continue adapting historical battles to Battle Chronicler to run online events for the local museum until we can meet in person. Thankfully the adventure gaming hobby goes beyond the basic act of playing games; so I’ve indulged in related hobby activities like writing roleplaying game material (which I’d do anyway), designing a few basic games like Sol O.P. Grand Prix and Skirmish Kids, painting miniatures, and crafting wargaming terrain. Nobody knows how long the pandemic will last, or when reasonable conditions will allow us to game face-to-face with a greater degree of safety. I hope we’re coming out of it soon. Until then I’ll keep on gaming in my own groove for now and be ready when it’s time to come out and play again.