My grandmother, who lived to be 100 years old, often gave me this advice, with a mischievous look yet a tone of resignation in her voice: “Don’t get old.” Now I’m a bit past 50 and have been feeling “old” creeping up on my weary, mortal form for a while now. Mostly it’s just aches and pains, sore muscles taking longer to heal, my eyesight getting worse, my fingers a bit more inept. Now and then I notice some physical limitation or other while I’m engaged in gaming activities. I still enjoy numerous manifestations of my adventure gaming hobby, but some are beginning to present slightly greater physical challenges. I often wish publishers might take such factors into account, though for now I find my own ways to manage. 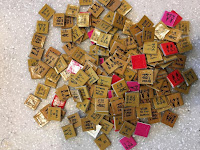 Back in my misspent youth I thought nothing of immersing myself in a good board wargame, Avalon Hill fare with vast maps and piles of half-inch cardboard counters crammed with tiny numerical stats and a few letter designations. I could paint miniatures all weekend without the aid of any magnifier device, though the results were marginally adequate. I could stay up until the early morning hours running roleplaying game sessions with friends. For a brief time I had energy to drive to visit friends at their colleges, running games across entire weekends. We filled summer breaks with roleplaying sessions that often lasted late into the night. At West End Games we frequently represented the company at conventions, both large ones like GenCon and smaller, regional shows; we spent hours behind a dealers table, talking with fans, sometimes running demo games at a booth, then often hours more running games for fans, even charity games with special Star Wars guests.

Time takes its toll and life often leaves few moments for such pursuits as it marches on past adulthood, through careers, and into family life. I’m lucky to have had the opportunity to keep gaming in my life and to enjoy it with my family and some friends in different ways and to varying degrees. But I find as I get older I have to make some adjustments; my slight but growing limitations start to affect the kinds of games I pursue.

I still own several classic board wargames, many of which use those tiny half-inch counters; but I’ve found my own solutions and gravitated toward newer games that use larger, more easily manipulated pieces. In some cases – where the components seem suitable – I’ve crafted a “large print” edition of a game for my personal use. This proves easiest with print-and-play games intended for home production, though getting the printer and PDF to cooperate in enlarging print components often proves a challenge in itself. I’ve thought about printing and mounting a double-sized set of tiles and mats for the classic King of the Tabletop game originally published in Dragon Magazine which I played frequently in my high school days (a spare, uncut copy I acquired years ago makes crafting the counters much easier). Still, this do-it-yourself approach seems like a lot of work...so I started looking for games with components more agreeable to my own limitations.

I’ve found a few board wargames utilizing larger chits – for instance, Worthington Publishing’s Battle of the Bulge 1944 and Victoria Cross II use 7/8 inch chits for units, with a correspondingly larger hex grid or areas of movement marked over the map board. Block games using stickers on wooden blocks for units – and allowing them to stand upright with a blank side facing the opponent for a “fog of war” effect – offer a more manageable tactile experience over flat counters. Columbia Games remains a leader in this field, though some Worthington Publishing titles use this format, too. Some have stickers on both sides as substitutes for figures, especially in board wargames like Commands & Colors Ancients and Napoleonics (though some enterprising gamers have converted these into miniatures games with terrain and painted figures). Some games by Worthington like Napoleon Returns 1815, Tarawa 1943, and Hidden Strike: American Revolution use wooden pieces both to indicate unit positions on the map board and to track unit strength; they’re far easier to pick up and handle than flat chits even if they increase a game’s price. A good example of this comes from comparing the classic Kingmaker game with Columbia Games’ Richard III. The former was my first board wargame (an experience I discussed before); we played it with the neighborhood kids a lot, if incorrectly, and had fun manipulating tokens and cards across the map of England divided into small sections, cities, and castles. I last played it 20 years ago in a solo format, back when I had the bachelor’s luxury of sprawling the game components over the kitchen table for an entire week of spare-time play. I recently acquired a copy of Richard III which also covers the War of the Roses, though with a slightly greater degree of abstraction, larger areas for movement on the map, stickered blocks for nobles and levies, and an absence of those pesky cardboard tokens. I played three games solitaire – made more interesting by the opponent blocks hiding their identities – with no problems moving blocks around the board and actually finding more tactile satisfaction as massed block armies converged on the battlefield. I enjoy both games but I’m more apt to play Richard III given the limitations of my life at the moment.
I still buy and paint miniatures, but even there I’m relying on simpler strategies. I prefer painting tanks and ships rather than infantry; they’re just easier. I rely on dry brushing and washes to enhance details. I’ve even experimented with the Army Painter’s speedpaints. I’ve occasionally resorted to using shading “dip” to bring out a miniature’s details, even on figures I painted in my youth in a basic “blocking” style. In exploring new historical gaming periods, however, I’ve found Peter’s Paperboys paper figures an invaluable resource. They’re ranks of color paper soldiers – both from reference books and from online PDFs – to copy or print out, assemble, and trim. Sure, they still require some work and precision cutting, but they’re not as time consuming nor do they require such meticulous work as painting miniatures. This resource allowed me to assemble historical armies with less time, effort, and expense than buying, prepping, assembling, painting, and basing three-dimensional miniatures. My ability to quickly dive into ancient Roman gaming (as I discussed at length earlier) helped me through isolation at the height of the pandemic. And if I really wanted, I could print out and assemble an army larger than the 25mm scale I currently use.

Considerations of age also figure into other realms of gaming. I’m taking more care evaluating Kickstarter games – which I already judge on several key categories before deciding to invest in them – making sure components aren’t too numerous or small for my pudgy fingers. I’m (slowly) learning to avoid games with lots of tiny fiddly bits. Terraforming Mars and 7 Wonders are good examples; the themes and gameplay engage me, but manipulating all the tiny pieces over multiple boards while keeping track of cards and other components eventually overwhelms me. And, honestly, my attention span and ability to comprehend and manage so many rules and possible strategies remains limited.

Roleplaying games don’t usually suffer from small, fiddly components, but a poor layout and tiny or overly ornate fonts can prove difficult for me to read and reference. I also have limited patience for complex mechanics (if I ever did). Similarly I have little time to immerse myself in vast tomes describing every aspect of a game setting; give me the basics, a few characteristic examples, and I can take it from there. I no longer care much for games with dense character sheets, preferring more graphically pleasing designs with a few, well-organized stats...both for ease of reference and as an indication of uncomplicated mechanics.

Perhaps conventions remain the biggest limiting concern related to roleplaying games and my age. I used to drive hours to regional conventions and run several four-hour sessions of roleplaying games: Star Wars, Pulp Egypt, Heroes of Rura-Tonga, occasionally others that piqued my interest. They were a huge expense of time, money, and effort, often leaving me wiped out for days afterward. I rarely run roleplaying games at conventions now. Instead I’ve gravitated more toward running miniature wargames at cons; even then they focus on basic mechanics suitable for kids and hobby newcomers...and they certainly don’t run as long and intensely as a four-hour roleplaying game session. The covid pandemic put the lid on my convention attendance for two years, yet I can’t help but re-evaluate my future participation – even at regional conventions – given the various expenses, not the least of which is on my limited energy to prepare for and run games at these events.

I expect part of my overall weariness comes from privations required by pandemic precautions: rare in-person gaming events, limited gatherings with friends, family gaming taking a back seat to other concerns (notably my son’s immersion in Roblox...), and just the general expenditure of physical and emotional energy in sustaining ourselves through two tumultuous years of plague. I take some solace in having found some games and activities that do not tax my aging abilities. And though I complain, I realize others suffer far more greatly than I do at the hands of age or other disability. I take heart that some game publishers across the spectrum of the adventure gaming hobby produce, intentionally or otherwise, games better suited to those with physical limitations, especially as those in the hobby move relentlessly into more aged states.

“You are never too old to set another goal or to dream a new dream.”