Every Star A Destination 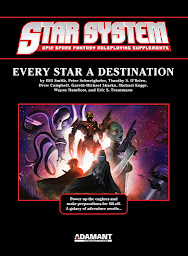 I’m constantly flattered when fans fondly recall West End Games’ Star Wars: The Roleplaying Game. They spot references to West End creations in current Star Wars media. They remind us how much they enjoyed projects on which we worked. And occasionally we get to return to that period a long time ago (more than 20 years) far, far away (in remote Honesdale, PA) when we worked full-time and freelance to produce two or three Star Wars game products a month for a burgeoning crowd of gaming and film fans. I was lucky then for these opportunities and I’m lucky again to relive a little of that excitement creating game material to reach a similar audience. The recently released Star System: Every Star A Destination scenario collection includes an adventure I wrote, “The Jungle Prophet.” West End Star Wars line editor veteran Eric S. Trautmann approached me about contributing to the book – a D6 System homage to the popular Instant Adventures supplement suitable for sci-fi roleplaying games – to commemorate the game’s 30th anniversary and the re-issue of a slick reprint slipcase edition.

Trautmann and publisher Adamant Entertainment knew the kind of nostalgia that would resonate with West End Star Wars game fans. Although Every Star A Destination is set in a generic sci-fi universe, the format and theme for adventures evoke those created for West End’s Star Wars scenario collection, Instant Adventures. I believe Instant Adventures remains one of the best supplements the company ever created for the Star Wars Roleplaying Game; it sits in the #5 spot on my “10 Most Influential D6 Star Wars RPG Products” over at the Griffon Publishing Studio website. What I wrote all those years ago still stands:

“Rather than expand one adventure by a single author into a full-length book, this supplement offered a handful of one-shot scenarios gamemasters could browse, quickly review, and use at a moment’s notice. Each scenario included maps, non-player characters, and a quick summary at the beginning to brief the gamemaster.... The scenarios range in location and theme, but each offered a solid night’s Star Wars gaming. The format gave rise to at least one other adventure collection that included illustrated stat cards (the bounty hunter-themed collection aptly titled No Disintegrations) and led the way to include more cardstock goodies bound within gamebooks or slipped in boxed sets. I still keep a copy with my Revised & Expanded rulebook and personal scenarios in case I ever need to pull out a quick adventure at a convention.” 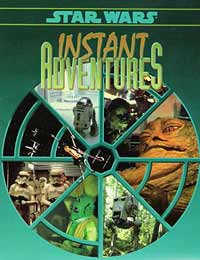 I vaguely recall the design rationale. We were looking for an ensemble project, one with contributions from various freelancers and staffers who could conform to the design parameters: one-shot scenarios including standardized elements to help gamemasters run them on the fly (“Quick-Start Outlines,” “Staging Tips,” useful sidebars and maps, ideas on using the adventure in “Spawning A Campaign”). Everyone proposed material for the stat cards, which served as added production value and an enhancement West End would use in a number of other supplements (a concept I’ve discussed before). My own contributions included “Agent Nallock Is Missing,” “Into the Heat of Battle,” and “New Recruits and Rebel Guns,” two of which were scenarios I designed in my pre-West End days and one created for a GenCon demo game on a fantastic mine complex diorama. (“Into the Heat of Battle” has long served as a go-to convention adventure.)

Contributing to Every Star A Destination reminded me how much fun I could still have writing that kind of scenario: an action-packed space opera romp for one session play. Thanks to Trautmann’s managerial efforts I’m in good company. Fellow contributors come from all levels of those who contributed to West End’s Star Wars game line, from second edition author Bill Smith and line editor Trautmann to prolific and occasional contributors like Timothy S. O’Brien, Drew Campbell, Michael Kogge, and my good friend Wayne Humfleet...not to mention gaming industry veteran and Adamant Entertainment publisher Gareth-Michael Skarka. The nostalgic layout intentionally looks like a classic West End Star Wars supplement further complimented by cover art from Colton Worley, interior illustrations from Darren Calvert, and insignia, diagrams, and cartography by Trautmann.

Thanks for approaching me with this great opportunity, Eric. My experiences at West End were an often contentious mixed bag of joy and frustration, great privilege tempered by sometimes overwhelming responsibility, and ultimately grievous disappointment at losing one of the most satisfying creative jobs of my life. I’m glad I could revisit the more exhilarating, fulfilling parts of that long-ago time by contributing to Every Star A Destination.