“I cannot tell you what profound respect I have for these Marines who took Tarawa, the living and the dead. I do not believe any Americans ever fought more bravely or so unselfishly.” 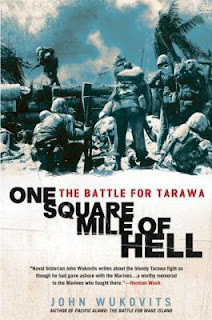 A few weeks ago I reflected how our wargaming experience might have more depth when we consider it more than simply playing a game, but give thought at some point to the history behind the battle, the ramifications for people who, on the board, often look like cardboard chits and playing pieces. Although that piece focused on issues of colonialism in the wake of Queen Elizabeth II’s passing, it also pertains to other issues, notably the human cost of war. I’m reading John Wukovits’ One Square Mile of Hell, an account of the battle for Tarawa in November, 1943, from its planning and training phases, through the ruthless fighting, and its aftermath with survivors and families. Coupled with my occasional visits to the National Museum of the Marine Corps and my enjoyment of Worthington Publishing’s solitaire Tarawa 1943 game, the book offered a vivid, painful reminder of the price we pay to wage war. 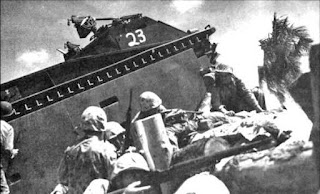 Right from the start Wukovits draws readers into the stories behind the people he follows into battle and the families on the home front. The high school buddies from Texas. Soldiers from different backgrounds who overcame obstacles to join the Marine Corps and fight for their country in the wake of Pearl Harbor. Reporters and cameramen sent into the fighting to bring back stark images of the horrors of combat. Commanders whose mettle remained to face the test of combat. He shares their very voices from letters, diaries, and interviews. Their fears, their hopes, the love for family and sweethearts. At times it’s hard to realize this isn’t a novelization of the events featuring characters with whom readers quickly bond. These are real people. Readers follow them through their warm welcome in New Zealand to recover from Guadalcanal and train for the upcoming operation; high-level plans for the invasion; the naval bombardment; and the beach landings themselves, with numerous problems, and the slow, bloody advance through machine gun fire from entrenched enemies. Wukovits also offers a glimpse at the Japanese mindset, following the garrison commander Keiji Shibazaki along with several Japanesse survivors who recorded their experiences of their defensive preparations, the bushido mindset, and the fierce fighting. One Square Mile of Hell is not a reference filled with timelines and facts like Osprey military history titles; it immerses readers in the gut-wrenching experience of those who fought and died on Tarawa and those they left behind. 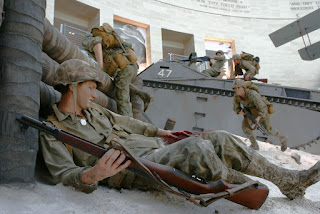 I bought One Square Mile of Hell at the gift shop in the National Museum of the Marine Corps during our last summertime visit. I didn’t know much about the Battle of Tarawa, though I’d bought a copy of Worthington Publishing’s solo game of the same name and played it several times. (I always try getting new books on such visits to broaden my horizons, including on on the Marine Corps at Belleau Wood in World War I.) The museum in Quantico serves as a good day trip destination from our home in Virginia; we manage a visit once or sometimes twice a year. Besides the usual museum displays it boasts some impressive artifacts – aircraft like Corsairs and the SBD Dauntless, Stuart and Sherman tanks, the American flag raised on Iwo Jima – and several “immersive” exhibits: a simulated German foxhole and point-of-view film of Belleau Wood; a defensive position on the Chosin Reservoir in the Korean War, complete with lower temperatures, chatter from soldiers, and the sound of bullets whizzing by; a fortification near Khe Sanh receiving supplies from a CH-46 helicopter; and a life-sized diorama of an amphibious tractor crashed into the palm log wall on Tarawa, marines taking cover or leaping over the defenses to plunge into combat. It’s certainly an educational experience, but it’s also a solemn one that can inspire one to contemplate why at times we must go to war and the very dear price many page to wage it. If you’re visiting Virginia or Washington, DC, it’s worth seeing. 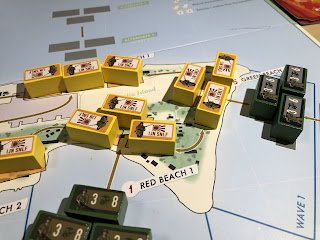 While World War II remains one historical period I explore through books, films, and games, I’d not had much interest in the war in the Pacific before. Sure, I knew about Pearl Harbor, Midway, and Leyte Gulf, but not much about the island-hopping campaign the marines fought on their way toward Japan. So when Worthington Publishing launched a Kickstarter for Tarawa 1943 I backed it (it also helped that it was a solo game...). The game combines several mechanics – card play, push-your-luck dice rolls, tracking unit strength or “cohesion” – with a board and wooden markers for unit positions. I’ve played it several times, winning about two-thirds of the time. True to real life, none of those wins were easy. The game provides plenty of opportunities for setbacks. At times it felt frustrating, especially when Japanese defenders quickly tore down the strength of marine units, often with multiple attacks. I never felt confident of a win until very late in the game. Worthington produced a game with high production values: wooden blocks with stickers for units, card decks, dice, full-color rulebook, and a board worthy of a military tactical display. Worthington didn’t simply offer a game, it provided historical context to better appreciate the soldiers the tiny wooden blocks represented. The better part of the “Battle Manual” (which provides detailed explanation of the cards) includes a strategic overview of the battle culled from an online Division of Public Information monograph. The rulebook and manual include plenty of photographs and period artwork to further transform the abstractions of a board game into the battle’s brutal visual realities.

One Square Mile of Hell, the National Museum of the Marine Corps, and Tarawa 1943 give readers, visitors, and players a more personal sense of what US Marines experienced at the battle for Tarawa. They do not offer a celebration of war, but an opportunity to immerse ourselves in events so we might solemnly contemplate and better appreciate he sacrifices warfare demands. I count myself lucky that my only exposure to the horrors of war comes from books, films, museums, and games and not from first-hand experience. And I regret our modern, 21st century world – almost 80 years after Tarawa’s bloody beaches – people must still endure warfare’s brutal tragedies.

“Tarawa cost the lives of nearly a thousand American boys and brought sorrow to as many homes. It brought home to the American people the grim reality that there is no cheap shortcut to win wars.”